Prunus cerasus (sour cherry,[3] tart cherry, or dwarf cherry[4]) is a species of Prunus in the subgenus Cerasus (cherries), native to much of Europe and southwest Asia. It is closely related to the sweet cherry (Prunus avium), but has a fruit that is more acidic, and has greater nutritional benefits.[5] The nutritional differences between the sweet and the tart or sour cherries are displayed at the general page for the fruit.

The tree is smaller than the sweet cherry (growing to a height of 4–10 m), has twiggy branches, and its crimson-to-near-black cherries are borne upon shorter stalks. There are several varieties of the sour cherry: the dark-red morello cherry and the lighter-red varieties including the amarelle cherry,[6] and the popular Montmorency cherry. The Montmorency cherry is the most popular type of sour cherry. The reason for its popularity is its use in baking and recipe creation.[7] including cherry pies, cherry desserts and other cherry-based recipes. 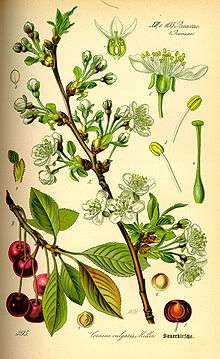 Prunus cerasus is thought to have originated as a natural hybrid between Prunus avium and Prunus fruticosa in the Iranian Plateau or Eastern Europe where the two species come into contact. Prunus fruticosa is believed to have provided its smaller size and sour tasting fruit. The hybrids then stabilised and interbred to form a new, distinct species.[8]

Cultivated sour cherries were selected from wild specimens of Prunus cerasus and the doubtfully distinct P. acida from around the Caspian and Black Seas, and were known to the Greeks in 300 BC. They were also extremely popular with Persians and the Romans who introduced them into Britain long before the 1st century AD. The fruit remains popular in modern-day Iran.

In Britain, their cultivation was popularised in the 16th century in the time of Henry VIII. They became a popular crop amongst Kentish growers, and by 1640 over two dozen named cultivars were recorded. In the Americas, Massachusetts colonists planted the first sour cherry, 'Kentish Red', when they arrived. 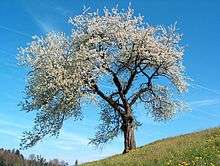 Before the Second World War there were more than fifty cultivars of sour cherry in cultivation in England; today, however, few are grown commercially, and despite the continuation of named cultivars such as 'Kentish Red', 'Amarelles', 'Griottes' and 'Flemish', only the generic Morello is offered by most nurseries. This is a late-flowering variety, and thus misses more frosts than its sweet counterpart and is therefore a more reliable cropper. The Morello cherry ripens in mid to late summer, toward the end of August in southern England. It is self-fertile, and would be a good pollenizer for other varieties if it did not flower so late in the season.

Sour cherries require similar cultivation conditions to pears, that is, they prefer a rich, well-drained, moist soil, although they demand more nitrogen and water than sweet cherries. Trees will do badly if waterlogged, but have greater tolerance of poor drainage than sweet varieties. As with sweet cherries, Morellos are traditionally cultivated by budding onto strong growing rootstocks, which produce trees too large for most gardens, although newer dwarfing rootstocks such as Colt and Gisella are now available. During spring, flowers should be protected, and trees weeded, mulched and sprayed with natural seaweed solution. This is also the time when any required pruning should be carried out (note that cherries should not be pruned during the dormant winter months). Morello cherry trees fruit on younger wood than sweet varieties, and thus can be pruned harder. They are usually grown as standards, but can be fan trained, cropping well even on cold walls, or grown as low bushes.[9] 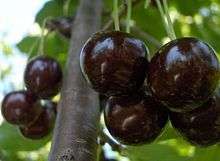 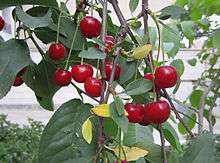 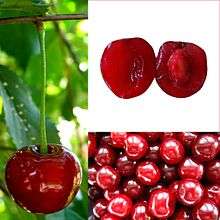 Sour cherries suffer fewer pests and diseases than sweet cherries, although they are prone to heavy fruit losses from birds. In summer, fruit should be protected with netting. When harvesting fruit, they should be cut from the tree rather than risking damage by pulling the stalks.

Unlike most sweet cherry varieties, sour cherries are self fertile or self pollenizing (sometimes inaccurately referred to as self-pollinating). Two implications of this are that seeds generally run true to the cultivar, and that much smaller pollinator populations are needed because pollen only has to be moved within individual flowers. In areas where pollinators are scarce, growers find that stocking beehives in orchards improves yields.[10]

Some cultivars of sour cherry trees, such as Montmorency and North Star, have been documented to perform better than other cherry trees in Colorado's Front Range region.[11][12] 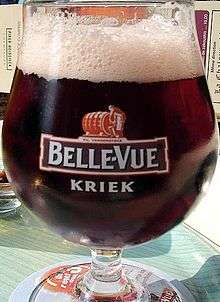 Sour cherries or sour cherry syrup are used in liqueurs and drinks. In Turkey, Greece and Cyprus, sour cherries are especially prized for making spoon sweets by slowly boiling pitted sour cherries and sugar; the syrup thereof is used for vişne şurubu or vyssináda, a beverage made by diluting the syrup with ice-cold water. A particular use of sour cherries is in the production of kriek lambic, a cherry-flavored variety of a naturally fermented beer made in Belgium.[14]

Medicinally, sour cherries may be useful in alleviating sleep problems due to its high melatonin content, a compound critical in regulating the sleep-wake cycle in humans.[15] As noted above, research in progress exists that is exploring whether sour cherries have a significant benefit in several medical applications (anti-inflammation,[16] and anti-microbial effects[17]) that is much greater than that of the species in general.