Radhanpur is a town and a municipality in Patan district in the Indian state of Gujarat.

According to the tradition, the city is named after Radhan Khan, a descendant of Fateh Khan Baloch. Fateh Khan Baloch received a freedom from the Gujarat Sultan Ahmad Shah III, which included the territory of the later day city of Radhanpur.[1] 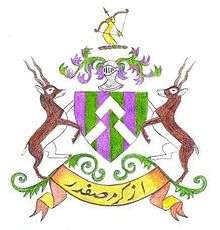 Radhanpur belonged to the Vaghelas and was known as Lunavada after Vaghela Lunaji of the Sardhara branch of that tribe. Subsequently, it was held as a fief under the Gujarat Sultanate, by Fateh Khan Baloch, and is said to have been named Radhanpur after Radhan Khan of that family.

Babi ancestors either entered India accompanying Mughal emperor Humayun or entered the service of Sultan Muzaffar III of Gujarat Sultanate (1561 - 1572). Bahadur Khan Babi was, in the reign of Shah Jahan, appointed manager of Tharad, and his son Sher Khan Babi made manager, thanadar, of Chunval in 1663. Their descendents controlled various villages around Radhanpur from 1693 to 1730 as Mughal fief. In 1743, Babi descendent Jawan Mard Khan II took over viceroyalty of Ahmedabad and controlled several villages in North Gujarat. He was defeated by Maratha Gaekwads in 1753 at Ahmedabad and Gaekwads agreed to his demand of control of villages in North Gujarat. His descendents lost some of these villages to Gaekwads subsequently. In 1813, Sher Khan made a treaty with the Gaekwar and British and became British protectorate.[2] His descendents ruled the state until independence of India in 1947.The last ruler of Radhanpur state was His Highness Nawab Murtuza Khan Babi Bahadur.And His Highness was entitled with Hereditary 11 Gun salute.

The town was surrounded by a part stone part brick loopholed wall fifteen feet high, eight feet broad, and about two and a half miles round, with corner towers, eight bastioned gateways, outworks and a ditch in past. There is also, surrounded by a wall, an inner fort or castle, called Rajghadi, where the Nawab used to live. Of public buildings there are twenty-four old Jain and ten old Hindu temples, and ten mosques. Of the Jain temples, some are large and richly carved with coloured marble floors. There are also some small well-carved tombs of former Nawabs including complete marble tomb of Nawab, Zoravar Khan.[6]

This article incorporates text from a publication now in the public domain: Gazetteer of the Bombay Presidency: Cutch, Palanpur, and Mahi Kantha. Government Central Press. 1880. p. 337.