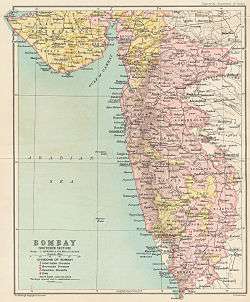 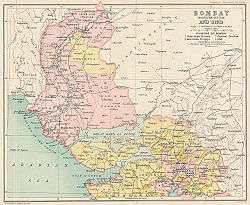 On November 1, 1956, Bombay State was re-organized under the States Reorganisation Act on linguistic lines, absorbing various territories including the Saurashtra and Kutch States, which ceased to exist. On May 1, 1960, Bombay State was dissolved and split on linguistic lines into the two states of Gujarat, with Gujarati speaking population and Maharashtra, with a largely Marathi speaking population..[1]

After India gained independence in 1947, Bombay Presidency became part of India, and Sind province became part of Pakistan. The territory retained by India was restructured into Bombay State. It included princely states such as Kolhapur in Deccan, and Baroda and the Dangs in Gujarat, which had been under the political influence of the former Bombay Presidency.[4]

Expansion of the state

As a result of the States Reorganisation Act on 1 November 1956, the Kannada-speaking districts of Belgaum (except Chandgad taluk), Bijapur, Dharwar, and North Canara were transferred from Bombay State to Mysore State.[5] but the State of Bombay was significantly enlarged, expanding eastward to incorporate the Marathi-speaking Marathwada region of Hyderabad State, the Marathi-speaking Vidarbha region of southern Madhya Pradesh, and Gujarati-speaking Saurashtra and Kutch states. The Bombay state was being referred to by the local inhabitants as "Maha Dwibhashi Rajya", meaning, "the great bilingual state".[3]

In 1956, the States Reorganisation Committee, against the will of Jawaharlal Nehru, recommended a bilingual state for Maharashtra-Gujarat with Bombay as its capital, whereas in Lok Sabha discussions in 1955, the Congress party demanded that the city be constituted as an autonomous city-state.[6] In the 1957 elections, the Samyukta Maharashtra movement opposed these proposals, and insisted that Bombay be declared the capital of Maharashtra.[7]

Bombay State was finally dissolved with the formation of Maharashtra and Gujarat states on May 1, 1960.[8]

Following protests of Samyukta Maharashtra Movement, in which 105 people were killed by police, Bombay State was reorganised on linguistic lines.[9] Gujarati-speaking areas of Bombay State were partitioned into the state of Gujarat following Mahagujarat Movement.[10] Maharashtra State with Bombay as its capital was formed with the merger of Marathi-speaking areas of Bombay State, eight districts from Central Provinces and Berar, five districts from Hyderabad State, and numerous princely states enclosed between them.[11]

Bombay State had three Chief Ministers after the independence of India:

In 1960, the designation of the "Governor of Bombay" was transmuted as the Governor of Maharashtra.[12]