Rainwater capture and storage system at the Monterrey Institute of Technology and Higher Education, Mexico City. 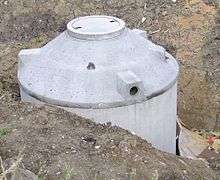 A cistern for rainwater storage

Rainwater harvesting is the accumulation and deposition of rainwater for reuse on-site, rather than allowing it to run off. Rainwater can be collected from rivers or roofs, and in many places the water collected is redirected to a deep pit (well, shaft, or borehole), a reservoir with percolation, or collected from dew or fog with nets or other tools. Its uses include water for gardens, livestock, irrigation, domestic use with proper treatment, and indoor heating for houses etc. The harvested water can also be used as drinking water, longer-term storage and for other purposes such as groundwater recharge.

Rainwater harvesting provides an independent water supply during regional water restrictions and in developed countries is often used to supplement the main supply. It provides water when there is a drought, can help mitigate flooding of low-lying areas, and reduces demand on wells which may enable groundwater levels to be sustained. It also helps in the availability of potable water as rainwater is substantially free of salinity and other salts. Application of rainwater harvesting in urban water system provides a substantial benefit for both water supply and wastewater subsystems by reducing the need for clean water in water distribution system, less generated stormwater in sewer system,[1] as well as a reduction in stormwater runoff polluting freshwater bodies.

There has been a large body of work focused on the development of Life Cycle Assessment and Life Cycle Costing methodologies to assess the level of environmental impacts and money that can be saved by implementing rainwater harvesting systems.

More development and knowledge is required to understand the benefits rainwater harvesting can provide to agriculture. Many countries especially those with an arid environment use rainwater harvesting as a cheap and reliable source of clean water.[2] To enhance irrigation in arid environments, ridges of soil are constructed in order to trap and prevent rainwater from running down hills and slopes. Even in periods of low rainfall, enough water is collected in order for crops to grow.[3] Water can be collected from roofs, dams, and ponds can be constructed in order to hold large quantities of rainwater so that even on days where there is little to no rainfall, there is enough available to irrigate crops.[3]

The concentration of contaminants is reduced significantly by diverting the initial flow of run-off water to waste.[4] Improved water quality can also be obtained by using a floating draw-off mechanism (rather than from the base of the tank) and by using a series of tanks, with draw from the last in series. Pre-filtration is a common practice used in the industry to ensure that the water entering the tank is free of large sediment. Pre-filtration is important to keep the system healthy.

Conceptually, a water supply system should match the quality of water with the end use. However, in most of the developed world high quality potable water is used for all end uses. This approach wastes money and energy and imposes unnecessary impacts to the environment. Supplying rainwater that has gone through preliminary filtration measures for non-potable water uses, such as toilet flushing, irrigation, and laundry, may be a significant part of a sustainable water management strategy.

Rainwater harvesting systems can range in complexity, from systems that can be installed with minimal skills, to automated systems that require advanced setup and installation. The basic Rainwater harvesting system is more of a plumbing job than a technical job as all the outlets from the building terrace are connected through a pipe to an underground tank that stores water.

Systems are ideally sized to meet the water demand throughout the dry season since it must be big enough to support daily water consumption. Specifically, the rainfall capturing area such as a building roof must be large enough to maintain adequate flow. The water storage tank size should be large enough to contain the captured water.

For low-tech systems, there are many low-tech methods used to capture rainwater: rooftop systems, surface water capture, and pumping the rainwater that has already soaked into the ground or captured in reservoirs and storing it into tanks (cisterns).

Before a rainwater harvesting system is built, it is helpful to use digital tools. For instance, if you want to detect if a region has a high rainwater harvesting potential, rainwater harvesting GIS maps can be made using an online interactive tool. Or if you need to estimate how much water is needed to fulfill a community's water needs, the Rain is Gain tool helps with this. Tools like these can save time and money before a commitment to build a system is undertaken, in addition to making the project sustainable and last a long time.

Contemporary system designs require an analysis of not only the economic and technical performance of a system, but also the environmental performance. Life Cycle Assessment is a methodology used to evaluate the environmental impacts of a precut or systems, from cradle-to-grave of its' lifetime. Devkota et al.,[5][6] developed such a methodology for rainwater harvesting, and found that the building design (e.g., dimensions) and function (e.g., educational, residential, etc.) play critical roles in the environmental performance of the system. The Economic and Environmental Analysis of Sanitations Technologies, EEAST model evaluates the greenhouse gas emissions and cost of such systems over the lifetime of a variety of building types.

To address the functional parameters of rainwater harvesting systems, a new metric was developed - the demand to supply ratio (D/S) - identifying the ideal building design (supply) and function (demand) in regard to the environmental performance of rainwater harvesting for toilet flushing. With the idea that supply of rainwater not only saves the potable water, but also saves the stormwater entering the combined sewer network (thereby requiring treatment), the savings in environmental emissions were higher if the buildings are connected to a combined sewer network compared to separate one.[6] 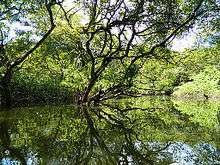 Rain water harvesting is possible by growing fresh water flooded forests without losing the income from the used /submerged land.[7] The main purpose of the rain water harvesting is to utilize the locally available rain water to meet water requirements throughout the year without the need of huge capital expenditure. This would facilitate availability of uncontaminated water for domestic, industrial and irrigation needs.

Instead of using the roof for catchment, the RainSaucer, which looks like an upside down umbrella, collects rain straight from the sky. This decreases the potential for contamination and makes potable water for developing countries a potential application.[8] Other applications of this free standing rainwater collection approach are sustainable gardening and small plot farming.[9]

A Dutch invention called the Groasis Waterboxx is also useful for growing trees with harvested and stored dew and rainwater.

Presentation of RainSaucer system to students at Orphanage in Guatemala.

Traditionally, storm water management using detention basins served a single purpose. However, Optimized Real-Time Control (OptiRTC) lets this infrastructure double as a source of rainwater harvesting without compromising the existing detention capacity.[10] This has been used in the EPA headquarters to evacuate stored water prior to storm events, thus reducing wet weather flow while ensuring water availability for later reuse. This has the benefit of increasing water quality released and decreasing the volume of water released during combined sewer overflow events.[11][12]

Generally, check dams are constructed across the streams to enhance the percolation of surface water in to the sub soil strata. The water percolation in the water impounded area of the check dams, can be enhanced artificially many folds by loosening the sub soil strata / overburden by using ANFO explosives as used in open cast mining. Thus local aquifers can be recharged quickly by using the available surface water fully for using in the dry season.

Around the third century BC, the farming communities in Balochistan (now located in Pakistan, Afghanistan and Iran), and Kutch, India, used rainwater harvesting for agriculture and many uses also.[13] In ancient Tamil Nadu , rainwater harvesting was done by Chola kings.[14] Rainwater from the Brihadeeswarar temple (located in Balaganpathy Nagar, Thanjavur, India) was collected in Shivaganga tank.[15] During the later Chola period, the Vīrānam tank was built (1011 to 1037 CE) in Cuddalore district of Tamil Nadu to store water for drinking and irrigation purposes. Vīrānam is a 16 km (9.9 mi) long tank with a storage capacity of 1,465,000,000 cubic feet (41,500,000 m3).

Rainwater harvesting was done in the Indian states of Madhya Pradesh, Maharashtra, and Chhattisgarh in the olden days. Ratanpur, in the state of Chhattisgarh, had around 150 ponds. Most of the tanks or ponds were utilized in agriculture works.

It is a little know fact that the town of Venice depended for centuries on rainwater harvesting. The lagoon which surrounds Venice is made of brackish water which is not suitable for human drinking. The ancient inhabitants of Venice established a system of rainwater collection which was based on man-made insulated collection wells.[16] Water would percolate down the specially designed stone flooring, and be filtered by a layer of sand, then collecting at the bottom of the well. Later, as Venice acquired territories on the mainland, it started to import water by boat from local rivers, but the wells remained in use, and were especially important in time of war when access to the mainland water could be blocked by an assailant.

A number of Canadians have started implementing rainwater harvesting systems for use in stormwater reduction, irrigation, laundry, and lavatory plumbing. Substantial reform to Canadian law since the mid 2000s has increased the use of this technology in agricultural, industrial, and residential use; but ambiguity remains amongst legislation in many provinces. Bylaws and local municipal codes often regulate rainwater harvesting.

The Mumbai city council is planning to make rainwater harvesting mandatory for large societies.[26] An attempt has been made at the Department of Chemical Engineering, IISc, Bangalore to harvest rainwater using upper surface of a solar still, which was used for water distillation[27]

The Southwest Center for the Study of Hospital and Healthcare Systems in cooperation with Rotary International is sponsoring a rainwater harvesting model program across the country. The first rainwater catchment system was installed at an elementary school in Lod, Israel. The project is looking to expand to Haifa in its third phase. The Southwest Center has also partnered with the Water Resources Action Project (WRAP) of Washington D.C. WRAP currently has rainwater harvesting projects in the West Bank. Rainwater harvesting systems are being installed in local schools for the purpose of educating schoolchildren about water conservation principles and bridging divides between people of different religious and ethnic backgrounds all while addressing the water scarcity issue that the Middle East faces.[28]

Although New Zealand has plentiful rainfall in the West and South, for much of the country, rain water harvesting is the normal practice for most rural housing and is encouraged by most councils [29]

The South African Water Research Commission has supported research into rainwater harvesting. Reports on this research are available on their 'Knowledge Hub'.[32] Studies in arid, semi-arid and humid regions have confirmed that techniques such as mulching, pitting, ridging and modified run-on plots are effective for small-scale crop production.[33]

In the United Kingdom, water butts are often found in domestic gardens and on allotments to collect rainwater, which is then used to water the garden. However, the British government's Code For Sustainable Homes encouraged fitting large underground tanks to new-build homes to collect rainwater for flushing toilets, watering and washing. Ideal designs had the potential to reduce demand on mains water supply by half. The code was revoked in 2015.