For the lake in North West England, see Wast Water. 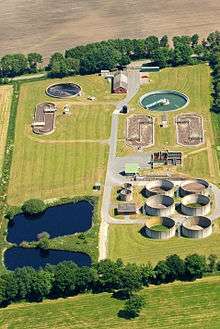 Wastewater, also written as waste water, is any water that has been adversely affected in quality by anthropogenic influence. Wastewater can originate from a combination of domestic, industrial, commercial or agricultural activities, surface runoff or stormwater, and from sewer inflow or infiltration.[1]

Municipal wastewater (also called sewage) is usually conveyed in a combined sewer or sanitary sewer, and treated at a wastewater treatment plant. Treated wastewater is discharged into receiving water via an effluent pipe. Wastewaters generated in areas without access to centralized sewer systems rely on on-site wastewater systems. These typically comprise a septic tank, drain field, and optionally an on-site treatment unit. The management of wastewater belongs to the overarching term sanitation, just like the management of human excreta, solid waste and stormwater (drainage).

Sewage is a type of wastewater that comprises domestic wastewater and is therefore contaminated with feces or urine from people's toilets, but the term sewage is also used to mean any type of wastewater. Sewerage is the physical infrastructure, including pipes, pumps, screens, channels etc. used to convey sewage from its origin to the point of eventual treatment or disposal.

Wastewater can come from:

Wastewater can be diluted or mixed with other types of water in the form of:

After it has undergone some treatment, the "treated wastewater" remains, e.g.:

The composition of wastewater varies widely. This is a partial list of what it may contain:

Any oxidizable material present in an aerobic natural waterway or in an industrial wastewater will be oxidized both by biochemical (bacterial) or chemical processes. The result is that the oxygen content of the water will be decreased. Basically, the reaction for biochemical oxidation may be written as:

Oxygen consumption by reducing chemicals such as sulfides and nitrites is typified as follows:

The so-called 5-day BOD measures the amount of oxygen consumed by biochemical oxidation of waste contaminants in a 5-day period. The total amount of oxygen consumed when the biochemical reaction is allowed to proceed to completion is called the Ultimate BOD. Because the Ultimate BOD is so time consuming, the 5-day BOD has been almost universally adopted as a measure of relative pollution effect.

There are also many different COD tests of which the 4-hour COD is probably the most common.

There is no generalized correlation between the 5-day BOD and the ultimate BOD. Similarly there is no generalized correlation between BOD and COD. It is possible to develop such correlations for specific waste contaminants in a specific wastewater stream but such correlations cannot be generalized for use with any other waste contaminants or wastewater streams. This is because the composition of any wastewater stream is different. As an example an effluent consisting of a solution of simple sugars that might discharge from a confectionery factory is likely to have organic components that degrade very quickly. In such a case, the 5 day BOD and the ultimate BOD would be very similar since there would be very little organic material left after 5 days. However a final effluent of a sewage treatment works serving a large industrialised area might have a discharge where the ultimate BOD was much greater than the 5 day BOD because much of the easily degraded material would have been removed in the sewage treatment process and many industrial processes discharge difficult to degrade organic molecules.

The laboratory test procedures for the determining the above oxygen demands are detailed in many standard texts. American versions include the "Standard Methods for the Examination of Water and Wastewater."[2] 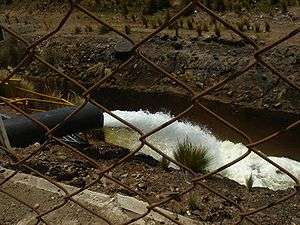 In some urban areas, municipal wastewater is carried separately in sanitary sewers and runoff from streets is carried in storm drains. Access to either of these is typically through a manhole. During high precipitation periods a combined sewer overflow can occur, forcing untreated sewage to flow back into the environment. This can pose a serious threat to public health and the surrounding environment.

Sewage may drain directly into major watersheds with minimal or no treatment but this usually has serious impacts on the quality of an environment and on the health of people. Pathogens can cause a variety of illnesses. Some chemicals pose risks even at very low concentrations and can remain a threat for long periods of time because of bioaccumulation in animal or human tissue.

For municipal wastewater the use of septic tanks and other On-Site Sewage Facilities (OSSF) is widespread in some rural areas, for example serving up to 20 percent of the homes in the U.S.[3]

One type of aerobic treatment system is the activated sludge process, based on the maintenance and recirculation of a complex biomass composed of micro-organisms able to absorb and adsorb the organic matter carried in the wastewater. Anaerobic wastewater treatment processes (UASB, EGSB) are also widely applied in the treatment of industrial wastewaters and biological sludge. Some wastewater may be highly treated and reused as reclaimed water. Constructed wetlands are also being used.

Treated wastewater can be reused as drinking water, in industry (for example in cooling towers), in artificial recharge of aquifers, in agriculture and in the rehabilitation of natural ecosystems (for example in Florida's Everglades).

Reuse in gardening and agriculture

There are benefits of using recycled water for irrigation, including the lower cost compared to some other sources and consistency of supply regardless of season, climatic conditions and associated water restrictions. Irrigation with recycled wastewater can also serve to fertilize plants if it contains nutrients, such as nitrogen, phosphorus and potassium.

Around 90% of wastewater produced globally remains untreated, causing widespread water pollution, especially in low-income countries. Increasingly, agriculture is using untreated wastewater for irrigation. Cities provide lucrative markets for fresh produce, so are attractive to farmers. However, because agriculture has to compete for increasingly scarce water resources with industry and municipal users, there is often no alternative for farmers but to use water polluted with urban waste directly to water their crops.

There can be significant health hazards related to using untreated wastewater in agriculture. Wastewater from cities can contain a mixture of chemical and biological pollutants. In low-income countries, there are often high levels of pathogens from excreta, while in emerging nations, where industrial development is outpacing environmental regulation, there are increasing risks from inorganic and organic chemicals. The World Health Organization, in collaboration with the Food and Agriculture Organization of the United Nations (FAO) and the United Nations Environmental Program (UNEP), has developed guidelines for safe use of wastewater in 2006.[4] These guidelines advocate a ‘multiple-barrier’ approach to wastewater use, for example by encouraging farmers to adopt various risk-reducing behaviours. These include ceasing irrigation a few days before harvesting to allow pathogens to die off in the sunlight, applying water carefully so it does not contaminate leaves likely to be eaten raw, cleaning vegetables with disinfectant or allowing fecal sludge used in farming to dry before being used as a human manure.[5]

The words "sewage" and "sewer" came from Old French essouier = "to drain", which came from Latin exaquāre. Their formal Latin antecedents are exaquāticum and exaquārium.

Council Directive 91/271/EEC on Urban Wastewater Treatment was adopted on 21 May 1991,[6] amended by the Commission Directive 98/15/EC.[7] Commission Decision 93/481/EEC defines the information that Member States should provide the Commission on the state of implementation of the Directive.[8]

The Clean Water Act is the primary federal law in the United States governing water pollution.[9]