This article is about a city in Madhya Pradesh. For other uses, see Rajgarh.

Rajgarh (Hindi: राजगढ़) is a city and a municipality in the state of Madhya Pradesh in India. It is the administrative headquarters of Rajgarh District, and was a princely state under the British Raj, named Rajgarh State. The old city belongs to the Malwa region and is surrounded by a battlemented wall. Rajgarh is now known for NTPC solar power plant and dam projects running over here, as a result companies like Tata and Reliance Power have shown interest. 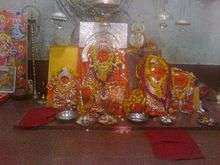