In 2016, he established his production house, Konidela production company. He was the co owner of Anjana Productions which established the year 1988.[3]

Ram Charan was born in Chennai to Telugu actor Chiranjeevi and Surekha. He has two sisters. He is the grandson of Allu Rama Lingaiah and the nephew of Nagendra Babu, Pawan Kalyan, and Allu Aravind. He is the cousin of Allu Arjun, Varun Tej and Sai Dharam Tej. Charan got engaged to Upasana Kamineni, the vice-chairman of Apollo Charity and chief editor of B Positive magazine, in Hyderabad on 1 December 2011. Upasana is the granddaughter of Prathap C. Reddy, the Executive Chairman of the Apollo Hospitals.[4][5] Subsequently, they got married on 14 June 2012 at the Temple Trees Farm House.[6]

Ram Charan is an equestrian, and entrepreneur.[7] He owns the polo team Ram Charan Hyderabad Polo Riding Club.[8] He serves on the board of directors of MAA TV.[9]

In early July 2015, he started his own Hyderabad-based airline business called TruJet.[10]

In 2007, Ram Charan made his film debut as the leading man in the film Chirutha which was directed by Puri Jagannadh and completed 50 days in 178 direct centres and 15 other shifted centres. The film completed 100 days in 40 direct centres.[12] He played the role of Charan, an ex-convict who is hellbent on killing the murderer of his father. Rediff.com praised his performance stating "Ram Charan is quite promising. Dance and action appear to be forte. He is rather graceful in the dance numbers. He also stays clear of any oblique reference to his star father by way of dialogue or adopting any particular mannerism or style."[13] His performance in the film earned him a Filmfare Best South Debutant Award and Nandi Special Jury Award.[14]

After the release of the 2009 blockbuster Magadheera, which was only his second film, directed by S.S.Rajamouli Charan established himself as one of the leading contemporary actors of Tollywood. He played a dual role in this film in which one is a brave soldier of a kingdom in Rajasthan in the 17th century who is in love with the princess but loses her and dies, the other a bike racer who falls in love with a girl who is the re-incarnation of the princess and wins her knowing their past. His portrayal got immense critical acclaim. The Times of India wrote "Ram Charan returns as a valiant soldier and breathes life into the larger-than-life role with ease. He showcases his horse-riding and dancing skills to perfection."[15] IndiaGlitz commented "Charan has come up with a mature performance and he has carried the film very well. Both his characters were done good justice and he reminded of his father at many places."[16] Directed by S. S. Rajamouli,[17] the film received six Filmfare Awards including the award for Filmfare Award for Best Actor – Telugu and Nandi Special Jury Award for Charan.[18] In 2009, he became a spokesperson for Pepsi's advertisement campaigns.[19]

Charan starred in Bommarillu Bhaskar's Orange in 2010 as Ram, an NRI living in Australia whose opinions are against loving forever. IndiaGlitz wrote "Ram Charan gave an excellent performance all through the film. His attire, make up, dressing style, accessories and body language gives the audiences a fresh feel of an urbane guy. He improved a lot in all the departments including action, dances, dialogue modulation, body language."[20]

His next film was Rachcha directed by Sampath Nandi. He did the role of Betting Raj, a gambler whose life takes a toll on him. IndiaGlitz wrote " He shows flashes of Chiru-ness more than he ever did in the past; be it his baritone or demeanour, he is a Megastar in effect. Helped by a strong script, he could have been much better."[21] The film released on 5 April 2012 and was declared a commercial success.[22] 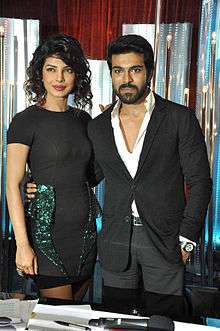 His first release in 2013 was Naayak directed by V. V. Vinayak. He played another dual role, one a mafia leader in Kolkata and the other a simple software employee in Hyderabad. The Times of India wrote "Ram Charan did a great job though there was no variation shown between the two characters."[23] It opened to positive critical acclaim and became a commercial success.[24]

Charan made his Bollywood debut through Zanjeer, a remake of the 1973 film of the same name. He played the role of ACP Vijay Khanna who swears Vengeance on his parents' killer. Charan made his debut as a playback singer with the song "Mumbai Ke Hero", composed by Chirantan Bhatt, in the album Thoofan, the Telugu version of Zanjeer.

In his next Telugu film, Yevadu (2014) directed by Vamsi Paidipally, he plays two characters, one who has received a face transplant of the other and becomes the target of underworld gangs because of the mistaken identity. Bangalore Mirror wrote "For Ram Charan, Yevadu is essential to establish his status after Toofan tanked at the box office. His character has two shades and he tries his best to bring variations. He dances like there is no tomorrow and the choreography is a delight to watch."[25] Sify wrote "Compared to his earlier films – Nayak and Thoofan, Ram Charan has done a fairly good job here. His acting is effective in intense scenes and action episode. To satisfy his audiences, he has also done some good steps in the Freedom song."[26] Charan's next release in the same year was the family drama Govindudu Andarivadele.[27] The film opened to mostly positive reviews from critics and grossed over ₹40 crore (US$5.9 million) at the box office.[28]

His next film was Bruce Lee.[29] Currently he is shooting for Dhruva (2016). He recently signed on a yet to be titled project directed by Sukumar, which will release post Diwali 2016.[30]

He is also the producer of his father Chiranjeevi's 150th film and also signed to appear in his uncle Pawan Kalyan's production.[31]