A real estate bubble or property bubble (or housing bubble for residential markets) is a type of economic bubble that occurs periodically in local or global real estate markets, typically following a land boom. A land boom is the rapid increase in the market price of real property such as housing until they reach unsustainable levels and then decline in a bubble.

The questions of whether real estate bubbles can be identified and prevented, and whether they have broader macroeconomic significance are answered differently by schools of economic thought, as detailed below. The financial crisis of 2007–08 was related to the bursting of real estate bubbles which had begun during the 2000s around the world.[1][2]

As with all types of economic bubbles, disagreement exists over whether or not a real estate bubble can be identified or predicted, then perhaps prevented. Speculative bubbles are persistent, systematic and increasing deviations of actual prices from their fundamental values.[4] Bubbles can often be hard to identify, even after the fact, due to difficulty in accurately estimating intrinsic values.

In real estate, fundamentals can be estimated from rental yields (where real estate is then considered in a similar vein to stocks and other financial assets) or based on a regression of actual prices on a set of demand and/or supply variables.[5][6]

Within mainstream economics, it can be posed that real estate bubbles cannot be identified as they occur and cannot or should not be prevented, with government and central bank policy rather cleaning up after the bubble bursts.

American economist Robert Shiller of the Case-Shiller Home Price Index of home prices in 20 metro cities across the United States indicated on May 31, 2011 that a "Home Price Double Dip [is] Confirmed"[7] and British magazine The Economist, argue that housing market indicators can be used to identify real estate bubbles. Some argue further that governments and central banks can and should take action to prevent bubbles from forming, or to deflate existing bubbles.

The pre-dominating economic perspective is that economic bubbles result in a temporary boost in wealth and a redistribution of wealth. When prices increase, there is a positive wealth effect (property owners feel richer and spend more), and when they decline, there is a negative wealth effect (property owners feel poorer and spend less). These effects can be smoothed by counter-cyclical monetary and fiscal policies. The ultimate effect on owners who bought before the bubble formed and did not sell is zero. Those who bought when low and sold high profited, whereas those who bought high and sold low (after the bubble has burst) or held until the price fell lost money. This redistribution of wealth is of little macroeconomic significance.

In some schools of heterodox economics, notably Austrian economics and Post-Keynesian economics, real estate bubbles are seen as an example of credit bubbles (pejoratively, speculative bubbles), because property owners generally use borrowed money to purchase property, in the form of mortgages. These are then argued to cause financial and hence economic crises. This is first argued empirically – numerous real estate bubbles have been followed by economic slumps, and it is argued that there is a cause-effect relationship between these.

The Post-Keynesian theory of debt deflation takes a demand-side view, arguing that property owners not only feel richer but borrow to (i) consume against the increased value of their property – by taking out a home equity line of credit, for instance; or (ii) speculate by buying property with borrowed money in the expectation that it will rise in value. When the bubble bursts, the value of the property decreases but not the level of debt. The burden of repaying or defaulting on the loan depresses aggregate demand, it is argued, and constitutes the proximate cause of the subsequent economic slump.

The crash of the Japanese asset price bubble from 1990 on has been very damaging to the Japanese economy.[8] The crash in 2005 affected Shanghai, China's largest city.[9] In comparison to the stock market bubbles, real estate bubbles take longer to deflate: prices decline slower because the real estate market is less liquid. Commercial real estate generally moves in tandem with the residential properties, since both are affected by many of same factors e.g., (interest rates) and share the "wealth effect" of booms. Therefore, this article focuses on housing bubbles and mentions other sectors only when their situation differs.

UK house prices between 1975 and 2006 adjusted for inflation. 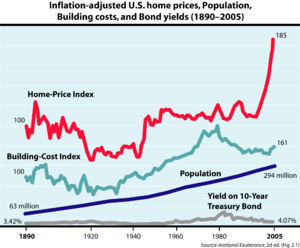 In attempting to identify bubbles before they burst, economists have developed a number of financial ratios and economic indicators that can be used to evaluate whether homes in a given area are fairly valued. By comparing current levels to previous levels that have proven unsustainable in the past (i.e. led to or at least accompanied crashes), one can make an educated guess as to whether a given real estate market is experiencing a bubble. Indicators describe two interwoven aspects of housing bubble: a valuation component and a debt (or leverage) component. The valuation component measures how expensive houses are relative to what most people can afford, and the debt component measures how indebted households become in buying them for home or profit (and also how much exposure the banks accumulate by lending for them). A basic summary of the progress of housing indicators for U.S. cities is provided by Business Week.[18] See also: real estate economics and real estate trends. 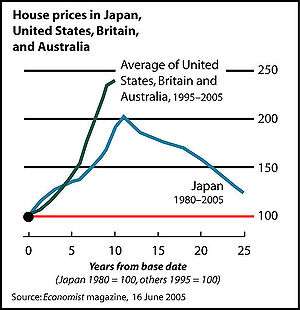 The house price-to-earnings ratio provides a direct comparison with P/E ratios utilised to analyze other uses of the money tied up in a home. Compare this ratio to the simpler but less accurate price-rent ratio below.

The latter is often measured using the "owner's equivalent rent" numbers published by the Bureau of Labor Statistics. It can be viewed as the real estate equivalent of stocks' price-earnings ratio; in other terms it measures how much the buyer is paying for each dollar of received rent income (or dollar saved from rent spending). Rents, just like corporate and personal incomes, are generally tied very closely to supply and demand fundamentals; one rarely sees an unsustainable "rent bubble" (or "income bubble" for that matter). Therefore a rapid increase of home prices combined with a flat renting market can signal the onset of a bubble. The U.S. price-rent ratio was 18% higher than its long-run average as of October 2004.[26]

This is the reciprocal of the house price-rent ratio. The net rental yield deducts the landlord's expenses (and sometimes estimated rental voids) from the gross rent before doing the above calculation; this is the reciprocal of the house P/E ratio.
Because rents are received throughout the year rather than at its end, both the gross and net rental yields calculated by the above are somewhat less than the true rental yields obtained when taking into account the monthly nature of rental payments. 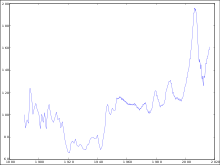 Measures of house price are also used in identifying housing bubbles; these are known as house price indices (HPIs).

A noted series of HPIs for the United States are the Case–Shiller indices, devised by American economists Karl Case, Robert J. Shiller, and Allan Weiss. As measured by the Case–Shiller index, the US experienced a housing bubble peaking in the second quarter of 2006 (2006 Q2).

Real estate bubbles in the 2000s

By 2006, most areas of the world were thought to be in a bubble state, although this hypothesis, based upon the observation of similar patterns in real estate markets of a wide variety of countries,[27] was subject to controversy. Such patterns include those of overvaluation and, by extension, excessive borrowing based on those overvaluations.

The subprime mortgage crisis, alongside its impacts and effects on economies in various nations, has implied that these trends might have some common characteristics.[10]

The Washington Post writer Lisa Sturtevant thinks that the housing market of 2013 was not indicative of a housing bubble. "A critical difference between the current market and the overheated market of the middle of last decade is the nature of the mortgage market. Stricter underwriting standards have limited the pool of potential homebuyers to those who are most qualified and most likely to be able to pay loans back. The demand this time is based more closely on market fundamentals. And the price growth we’ve experienced recently is 'real.' Or 'more real.'"[29] Other recent research indicates that mid-level managers in securitized finance did not exhibit awareness of problems in overall housing markets.[30]

Economist David Stockman believes that a second housing bubble was started in 2012 and still inflating as of February 2013.[31] Housing inventory began to dwindle starting in early 2012 as hedge fund investors and private equity firms purchase single family homes in hopes of renting them out while waiting for a housing rebound.[32] Due to the policies of QE3, mortgage interest rates have been hovering at an all-time low, causing real estate values to rise. Home prices have risen unnaturally as much as 25% within one year in metropolitan areas like the San Francisco Bay Area and Las Vegas.[33]