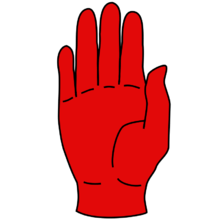 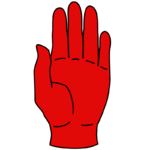 The Red Hand of Ulster, right and left hand versions

The Red Hand of Ulster (Irish: Lámh Dhearg Uladh) is an Irish symbol used in heraldry[1] to denote the Irish province of Ulster. It is an open hand coloured red, with the fingers pointing upwards, the thumb held parallel to the fingers, and the palm facing forward. It is usually shown as a right hand, but is sometimes a left hand, such as in the coats of arms of baronets. The symbol is rooted in Irish Gaelic culture and its origins are attributed to the mythical Irish figure Labraid Lámh Dhearg (Red Hand Labraid), of the Fenian Cycle of Irish mythology.[1][2]

It was originally a symbol belonging to the Ulaid before being adopted into the flag of the Norman Earldom of Ulster. After the collapse of the Earldom in the mid-14th century and the subsequent conquest of its lands by the Clandeboye O'Neills, the Red Hand symbol along with the title of "king of Ulster" was adopted by the O'Neills, and has since become known as the Red Hand of O'Neill.[3] More recently, it has also been used as an Ulster loyalist symbol.

The exclusive right to the use of the Red Hand symbol was still a matter of dispute in the 16th century, with a poem indicating disagreement between the "Síol Rúraí" (the Clanna Rudraige of Ulaid) and the northern descendants of Niall Naoighiallach (the O'Neills).

The original meaning of the Red Hand is unclear. The Red Hand has roots as an Irish Gaelic symbol and is believed to date back to pagan times. It was associated with a mythical figure called Labraid Lámderg, or Labhraidh Lámh Dhearg (Labraid of the Red Hand), who appears in the Fenian Cycle of Irish mythology.[1][2] Labraid is said to be the son of the god Nuada. In Irish mythology, Nuada had his hand cut off in battle, forcing him to give up his position as king of the gods. However, it is replaced with a silver hand, which then transforms into a real hand, thus allowing him to re-take his throne.[4] Alternatively, or perhaps later, the Red Hand came to symbolize the "Hand of God" in Christianity. An example of this motif can be seen on the 10th century Muiredach's High Cross at Monasterboice, County Louth. Another suggestion is that the Red Hand was associated with sovereignty and represented the derbfine. Gaelic chieftains and kings were elected from among a group of men (the derbfine) who shared the same great-grandfather. The palm may represent the great-grandfather with the three jointed divisions of the fingers representing his sons, grandsons, and great-grandsons.[5]

There is a popular legend about the origin of the Red Hand, with many local variations, in which it is associated with sovereignty and kingship. According to the legend, the kingdom of Ulster had at one time no rightful heir. Because of this, it is agreed that a boat race should take place and that "whosoever's hand is the first to touch the shore of Ireland, so shall he be made the king". One potential king so desires the kingship that, upon seeing that he is losing the race, he cuts off his hand and throws it to the shore—thus winning the kingship. The hand is red to represent the fact that it would have been covered in blood. In some versions of the tale, the king who cuts off his hand belongs to the Uí Néill clan, or is Niall of the Nine Hostages himself, which explains its association with them. In other versions, the king is Érimón, one of the Milesians.[6]

Another tale tells of two giants fighting each other. One has his hand cut off by the other, and a red imprint of the hand is left on the rocks.[7] 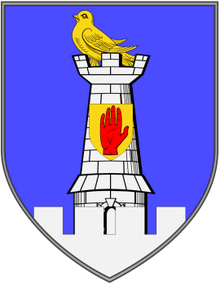 Coat of Arms of Monaghan

The form in common use is an open right (dexter) hand coloured red, with the fingers pointing upwards, the thumb held parallel to the fingers, and the palm facing forward.

The Red Hand symbol is believed to have been used by the Uí Néill clan during its Nine Years' War (1594–1603) against the spread of English control. The war cry Lámh Dhearg Abú! (Red Hand to victory!) was also associated with the Uí Néill.[9]

Coats of arms used by those whose surnames are of Uí Néill descent – Ó Donnghaile, Ó Catháin, Mac Aodha, Ó Dálaigh, Ó Maéilsheachlainn and Ó Ceatharnaigh, to name just a few – all feature the Red Hand in some form, recalling their common descent. On the Ó Néill coat of arms featuring the Red Hand, the motto is Lámh Dhearg Éireann (Red Hand of Ireland).[10] The arms of the chiefs of the Scottish Clan MacNeil (of Barra) contain the Red Hand; the clan has traditionally claimed descent from Niall of the Nine Hostages. Many other families have used the Red Hand to highlight an Ulster ancestry. The head of the Guinness family, the Earl of Iveagh, has three Red Hands on his arms granted as recently as 1891.[11]

After Walter de Burgh became Earl of Ulster in 1243 the de Burgh cross was combined with the Red Hand to create a flag that represented the Earldom of Ulster and later became the modern Flag of Ulster. During the plantation of Ulster it was part of the arms of The Irish Society;[12] sales of baronetcies originally helped fund the plantation so baronets of England and of Ireland and later baronets of Great Britain and of the United Kingdom were allowed to augment their arms with a "hand gules".[13]

The Red Hand is present on a number of Ulster counties crests such as Antrim, Cavan, Londonderry, Monaghan and Tyrone. It was later included in the now abolished Government of Northern Ireland flag. It is also used by many other official and non-official organisations throughout the province of Ulster and the rest of Ireland.

The Red Hand can be regarded as one of the very few cross-community symbols used in Northern Ireland (which makes up 6 of Ulster's 9 Counties) crossing the sectarian political divide. Due to its roots as a Gaelic Irish symbol, nationalist/republican groups have used (and continue to use) it – for example the republican Irish Citizen Army, the republican National Graves Association, Belfast, the Irish Transport and General Workers Union, the Ulster GAA association GAA clubs in Ulster . Other organisations within the nine counties of Ulster and also supported within the political sectarian divide, use it happily in the 6 Ulster 'Northern Ireland' Counties, such as the Ulster Hockey Union, these are supported from both sides of the community- nationalist and unionist. As the most identifiable symbol of Ulster, it is also used by Northern Ireland's unionists and loyalists, such as its use in the Ulster Covenant (1912) and in the arms of the Government of Northern Ireland (from 1922 and now abolished), the Ulster Banner (the former flag of the Northern Ireland government), the Ulster Volunteers and loyalist paramilitary groups based only within 'Northern Ireland' such as the Ulster Volunteer Force and Ulster Defence Association among others.

A left (sinister) Red Hand is used on a canton or escutcheon in the coat of arms of a baronet of England, Ireland, Great Britain or the United Kingdom. It is blazoned as follows: A hand sinister couped at the wrist extended in pale gules.[14] King James I of England established the hereditary Order of Baronets in England on 22 May 1611, in the words of Collins (1741): "for the plantation and protection of the whole Kingdom of Ireland, but more especially for the defence and security of the Province of Ulster, and therefore for their distinction those of this order and their descendants may bear (the Red Hand of Ulster) in their coats of arms either in a canton or an escutcheon at their election".[15] Such baronets may also display the Red Hand of Ulster on its own as a badge, suspended by a ribbon below the shield of arms.[16] Baronets of Nova Scotia, unlike other baronets, do not use the Red Hand of Ulster, but have their own badge showing the Saltire of St Andrew. The left hand version has also been used by the Irish National Foresters, the Irish Citizen Army and the Federated Workers' Union of Ireland.