Reichenau Island is an island in Lake Constance in southern Germany. It lies almost due west of the city of Konstanz, between the Gnadensee and the Untersee, two parts of Lake Constance. With a total land surface of 4.3 square kilometres and a circumference of 11 kilometres, the island is 4.5 kilometres long and 1.5 kilometres wide at its greatest extent. The highest point, the Hochwart, stands some 43 metres above the lake surface and 438.7 metres above mean sea level.

Reichenau is connected to the mainland by a causeway, completed in 1838, which is intersected between the ruins of Schopflen Castle and the eastern end of Reichenau Island by a 10-metre-wide and 95-metre long waterway, the Bruckgraben. A low road bridge allows the passage of ordinary boats but not of sailing-boats.

The island was declared a World Heritage Site in 2000 because of its monastery, the Abbey of Reichenau. The abbey's Münster (minster church) is dedicated to the Virgin and Saint Mark. Two further churches were built on the island consecrated to Saint George and to Saints Peter and Paul. The famous artworks of Reichenau include (in the church of St George) the Ottonian murals of miracles of Christ, unique survivals from the 10th century. The abbey's bailiff was housed in a two-storey stone building to which two more storeys of timber framing were added in the 14th century, one of the oldest timber-frame buildings in south Germany.

Among the Abbey's far-flung landholdings was Reichenau, a village on the upper Rhine in the municipality of Tamins in the canton of Graubünden, Switzerland, named for the Abbey.

Today the island is also famous for its vegetable farms. The Wollmatinger Ried next to the island is a large nature preserve, a wetland area of reeds which is used by many birds as a stopover during their annual migration. 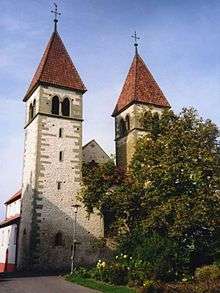 The Alemannic name of the island was Sindleozesauua, but it was also known as simply Ow, Auua (island) – Latinized as Augia, later also Augia felix or Augia dives (rich, or fertile, island), hence Richenow, Reichenau.

The Benedictine Abbey of Reichenau was founded in 724 by the itinerant Saint Pirmin,[1] who is said to have fled Spain ahead of the Moorish invaders, with patronage that included Charles Martel, and, more locally, Count Berthold of the Ahalolfinger and the Alemannian Duke Santfrid I (Nebi). Pirmin's conflict with Santfrid resulted in his leaving Reichenau in 727.[2] Under his successor Haito the monastery began to flourish. It gained influence in the Carolingian dynasty, under Abbot Waldo of Reichenau (740–814), by educating the clerks who staffed Imperial and ducal chanceries. Abbot Reginbert of Reichenau (-846) built up the important book collection.[3] Abbot Walahfrid Strabo (842–849), who was educated at Reichenau, was renowned as a poet and Latin scholar.[4]

The Abbey stood along a main north–south highway between Germany and Italy, where the lake passage eased the arduous route. The Abbey of Reichenau housed a school, and a scriptorium and artists' workshop, that has a claim to having been the largest and artistically most influential centre for producing lavishly illuminated manuscripts in Europe during the late 10th and early 11th centuries, often known as the Reichenau School. An example of the scriptorium's production is the Pericopes of Henry II, made for the Emperor, now in Munich. Reichenau has preserved its precious relics, which include the pitcher from the wedding at Cana.

The Abbey reached its apex under Abbot Berno of Reichenau (1008–48). During his time, important scholars, such as Hermannus Contractus, lived and worked in Reichenau. In the second half of the 11th century, the cultural importance of the Abbey started to wane owing to the restrictive reforms of Pope Gregory VII, and also to rivalry with the nearby St. Gall; in 1540, the Bishop of Constance, an old rival of the Reichenau abbots, became lord of Reichenau, and, under the control of the succeeding bishops, the abbey's significance dwindled.

When the abbey lands were secularized (initially in 1757 and permanently in 1803) and the monks disbanded under Napoleon, part of Reichenau's famed library was preserved in the state library (Landesbibliothek) at Karlsruhe. The Geographus Bavarus and several other important documents may be found in the Bavarian State Library in Munich. Since 2001 a small community of Benedictines has been re-established at Niederzell (Sts. Peter and Paul).

Burials at the Abbey