The Wadden Sea (Dutch: Waddenzee, German: Wattenmeer, Low German: Wattensee or Waddenzee, Danish: Vadehavet, West Frisian: Waadsee, North Frisian: di Heef) is an intertidal zone in the southeastern part of the North Sea. It lies between the coast of northwestern continental Europe and the range of Frisian Islands, forming a shallow body of water with tidal flats and wetlands. It is rich in biological diversity. In 2009, the Dutch and German parts of the Wadden Sea were inscribed on UNESCO's World Heritage List and the Danish part was added in June 2014.[1][2]

The Wadden Sea is one of the world's seas whose coastline has been most modified by humans,[3] via systems of dikes and causeways on the mainland and low-lying coastal islands. The Wadden Sea stretches from Den Helder in the Netherlands in the northwest, past the great river estuaries of Germany to its northern boundary at Skallingen north of Esbjerg in Denmark along a total length of some 500 km and a total area of about 10,000 km2. Within the Netherlands it is bounded from the IJsselmeer by the Afsluitdijk.

The German part of the Wadden Sea was the setting for the 1903 Erskine Childers novel The Riddle of the Sands. 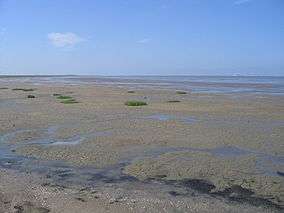 The mudflats of the Pilsumer Watt near Greetsiel, Germany

The word wad is Dutch for "mud flat" (Low German and German: Watt, Danish: Vade). The area is typified by extensive tidal mud flats, deeper tidal trenches (tidal creeks) and the islands that are contained within this, a region continually contested by land and sea. The landscape has been formed for a great part by storm tides in the 10th to 14th centuries, overflowing and carrying away former peat land behind the coastal dunes. The present islands are a remnant of the former coastal dunes.

The islands are marked by dunes and wide, sandy beaches towards the North Sea and a low, tidal coast towards the Wadden Sea. The impact of waves and currents, carrying away sediments, is slowly changing the layout of the islands. For example, the islands of Vlieland and Ameland have moved eastwards through the centuries, having lost land on one side and grown on the other.

The Wadden Sea is famous for its rich flora and fauna, especially birds. Hundreds of thousands of waders (shorebirds), ducks, and geese use the area as a migration stopover or wintering site, and it is also a rich habitat for gulls and terns.[4] However, the biodiversity of Wadden Sea today is only a fraction of what was seen before exploitation by humans; for birds, larger species such as geese,[5] eagles, flamingos, pelicans, and herons used to be common as well.[6] Some species that are regionally extinct are still available here.[7][8]

According to J. B. MacKinnon, larger fish including sturgeons, rays,[9] Atlantic salmon, brown trout, and others like lacuna snails and oyster beds that were once found elsewhere in the region have disappeared as well, as the actual size of the Wadden Sea was reduced to about 50% of the original sea, and nutrients from the river of Rhine no longer flow into the sea, resulting in about 90% of all the species which historically inhabited the Wadden Sea being at risk.[10]

Wadden Sea is an important habitat for two species of seals, harbor and grey seals. Harbour porpoises and Atlantic white-beaked dolphins (seasonally) which once were locally extinct but have re-colonized into the area, and these two are the only resident cetaceans in present days[11] while many other species have either disappeared or only visit seasonally or occasionally.[12][13] Nowadays, only 4 species of marine mammals above-mentioned could be counted as regular inhabitants of Wadden sea while many other species that experienced severe declines, habitat loss, and local or functional extinctions.[14] North Atlantic right whales and gray whales[15] were once seen in the region, using the shallow, calm waters for either feeding and breeding before they were completely wiped out by shore-based whaling.[16] These two species are now thought to be either extinct or remnant populations of which low-tens at best survive. One whale, possibly a right whale, was observed close to beaches on Texel in the West Frisian Islands and off Steenbanken, Schouwen-Duiveland in July 2005.[17] Recent increases in number of North Atlantic humpback whales and minke whales might have resulted in more visits and possible re-colonization by the species to the areas especially around Marsdiep.[18][19] Future recovery of once-extinct local bottlenose dolphins is also expected.[11]

Threats to the ecosystem

There are number of invasive species including algae, plants, and smaller organisms causing negative effects on native species introduced by human activities into North Sea coasts.[20]

Each of three countries has designated Ramsar sites in the region (see Wadden Sea National Parks).

In 1986, the Waddensea Area was declared a biosphere reserve by UNESCO.[22]

In June 2009, the Wadden Sea (comprising the Dutch Wadden Sea Conservation Area and the German Wadden Sea National Parks of Lower Saxony and Schleswig-Holstein) was placed on the World Heritage list by UNESCO.[23] The Danish part was added to the site in 2014.

People on the beach on Borkum, Germany

Many of the islands have been popular seaside resorts since the 19th century.

Mudflat hiking, i.e., walking on the sandy flats at low tide, has become popular in the Wadden Sea.

It is also a popular region for pleasure boating.