Mark the Evangelist (Latin: Mārcus; Greek: Μᾶρκος; Coptic: Μαρκοϲ; Hebrew: מרקוס‎‎) is the traditionally ascribed author of the Gospel of Mark. Mark is said to have founded the Church of Alexandria, one of the most important episcopal sees of Early Christianity. His feast day is celebrated on April 25, and his symbol is the winged lion.[2]

Mark the Evangelist's symbol is the winged lion, the Lion of Saint Mark

According to William Lane (1974), an "unbroken tradition" identifies Mark the Evangelist with John Mark,[3] and John Mark as the cousin of Barnabas.[4] However, Hippolytus of Rome in On the Seventy Apostles distinguishes Mark the Evangelist (2 Tim 4:11), John Mark (Acts 12:12, 25; 13:5, 13; 15:37), and Mark the cousin of Barnabas (Col 4:10; Phlm 1:24).[5] According to Hippolytus, they all belonged to the "Seventy Disciples" who were sent out by Jesus to saturate Judea with the gospel (Luke 10:1ff.). However, when Jesus explained that his flesh was "real food" and his blood was "real drink", many disciples left him (John 6:44–6:66), presumably including Mark. He was later restored to faith by the apostle Peter; he then became Peter’s interpreter, wrote the Gospel of Mark, founded the church of Africa, and became the bishop of Alexandria.

According to Eusebius of Caesarea (Eccl. Hist. 2.9.1–4), Herod Agrippa I, in his first year of reign over the whole of Judea (AD 41), killed James, son of Zebedee and arrested Peter, planning to kill him after the Passover. Peter was saved miraculously by angels, and escaped out of the realm of Herod (Acts 12:1–19). Peter went to Antioch, then through Asia Minor (visiting the churches in Pontus, Galatia, Cappadocia, Asia, and Bithynia, as mentioned in 1 Pet 1:1), and arrived in Rome in the second year of Emperor Claudius (AD 42; Eusebius, Eccl, Hist. 2.14.6). Somewhere on the way, Peter encountered Mark and took him as travel companion and interpreter. Mark the Evangelist wrote down the sermons of Peter, thus composing the Gospel according to Mark (Eccl. Hist. 15–16), before he left for Alexandria in the third year of Claudius (43).[6] 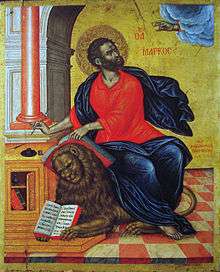 Icon of Saint Mark the Evangelist, 1657

Evidence for Mark the Evangelist's authorship of the Gospel that bears his name originates with Papias.[20][21] Scholars of the Trinity Evangelical Divinity School are "almost certain" that Papias refers to John Mark.[22] However, Catholic scholars have argued that identifying Mark the Evangelist with John Mark and Mark the Cousin of Barnabas has led to the downgrading of the character of Barnabas from truly a "Son of Comfort" to one who favored his blood relative over principles.[23]

Identifying Mark the Evangelist with John Mark also led to identifying him as the man who carried water to the house where the Last Supper took place (Mark 14:13),[24] or as the young man who ran away naked when Jesus was arrested (Mark 14:51–52).[25]

The Coptic Church accords with identifying Mark the Evangelist with John Mark, as well as that he was one of the Seventy Disciples sent out by Christ (Luke 10:1), as Hippolytus confirmed.[26] Coptic tradition also holds that Mark the Evangelist hosted the disciples in his house after Jesus' death, that the resurrected Jesus Christ came to Mark's house (John 20), and that the Holy Spirit descended on the disciples at Pentecost in the same house.[26] Furthermore, Mark is also believed to have been among the servants at the Marriage at Cana who poured out the water that Jesus turned to wine (John 2:1–11).[26]

According to the Coptic tradition, Saint Mark was born in Cyrene, a city in the Pentapolis of North Africa (now Libya). This tradition adds that Mark returned to Pentapolis later in life, after being sent by Paul to Colossae (Colossians 4:10; Philemon 24. Some, however, think these actually refer to Mark the Cousin of Barnabas), and serving with him in Rome (2 Tim 4:11); from Pentapolis he made his way to Alexandria.[27][28] When Mark returned to Alexandria, the pagans of the city resented his efforts to turn the Alexandrians away from the worship of their traditional gods. In AD 68, they placed a rope around his neck and dragged him through the streets until he was dead.[29]

In 828, relics believed to be the body of Saint Mark were stolen from Alexandria (at the time controlled by the Abbasid Caliphate) by two Venetian merchants with the help of two Greek monks and taken to Venice.[30] A mosaic in St Mark's Basilica depicts sailors covering the relics with a layer of pork and cabbage leaves. Since Muslims are not permitted to touch pork, this was done to prevent the guards from inspecting the ship's cargo too closely.[31] Donald Nicol explained this act as "motivated as much by politics as by piety", and "a calculated stab at the pretensions of the Patriarchate of Aquileia." But instead of being used to adorn the church of Grado, which claimed to possess the throne of Saint Mark, it was kept secretly by Doge Giustiniano Participazio in his modest palace. Possession of Saint Mark's remains was, in Nicol's words, "the symbol not of the Patriarchate of Grado, nor of the bishopric of Olivolo, but of the city of Venice." In his will, Doge Giustiniano asked his widow to build a basilica dedicated to Saint Mark, which was erected between the palace and the chapel of Saint Theodore Stratelates, who until then had been patron saint of Venice.[32]

In 1063, during the construction of a new basilica in Venice, Saint Mark's relics could not be found. However, according to tradition, in 1094, the saint himself revealed the location of his remains by extending an arm from a pillar.[33] The newfound remains were placed in a sarcophagus in the basilica.[34]

In June 1968, Pope Cyril VI of Alexandria sent an official delegation to Rome to receive a relic of Saint Mark from Pope Paul VI. The delegation consisted of ten metropolitans and bishops, seven of whom were Coptic and three Ethiopian, and three prominent Coptic lay leaders.

The relic was said to be a small piece of bone that had been given to the Roman pope by Giovanni Cardinal Urbani, Patriarch of Venice. Pope Paul, in an address to the delegation, said that the rest of the relics of the saint remained in Venice.

The delegation received the relic on June 22, 1968. The next day, the delegation celebrated a pontifical liturgy in the Church of Saint Athanasius the Apostolic in Rome. The metropolitans, bishops, and priests of the delegation all served in the liturgy. Members of the Roman papal delegation, Copts who lived in Rome, newspaper and news agency reporters, and many foreign dignitaries attended the liturgy.

Mark the Evangelist is most often depicted writing or holding his gospel. In Christian tradition, Mark the Evangelist, the author of the second gospel is symbolized by a lion – a figure of courage and monarchy.

Some Christian legends refer to Saint Mark as "Saint Mark The Lionhearted". These legends say that he was thrown to the Lions and the animals refused to attack or eat him. Instead the Lions slept at his feet while he petted them. When the Romans saw this, they released him, impressed by this sight.

Mark the Evangelist attributes are the Lion in the desert; he can be depicted as a bishop on a throne decorated with lions; as a man helping Venetian sailors.

Mark the Evangelist is often depicted holding a book with "pax tibi Marce" written on it or holding a palm and book. Mark the Evangelist attributes are the Lion in the desert. Other depictions of Mark show him as a man with a book or scroll, accompanied by a winged lion. The lion might also be associated with Jesus' Resurrection because lions were believed to sleep with open eyes, thus a comparison with Christ in his tomb, and Christ as king.