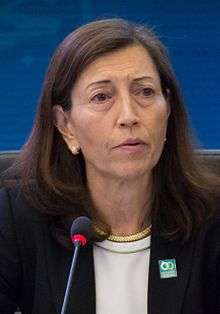 Pamela Hamamoto, current U.S. Ambassador to the European Office of the U.N.

Career FSO
After 1915, The United States Department of State began classifying ambassadors as career Foreign Service Officers (FSOs) for those who have served in the Foreign Service for a specified amount of time.

Political appointee
A person who is not a career foreign service officer, but is appointed by the president (often as a reward to political friends).

Terminated mission
Usually the date that the ambassador left the country. In some cases a letter of recall is presented, ending the ambassador’s commission, either as a means of diplomatic protest or because the diplomat is being reassigned elsewhere and replaced by another envoy.

Chargé d'affaires
The person in charge of the business of the embassy when there is no ambassador commissioned to the host country. See chargé d'affaires.

Ad interim
Latin phrase meaning "for the time being", "in the meantime". See ad interim. 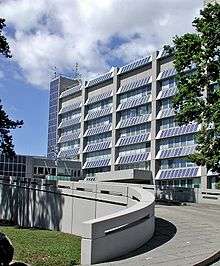 The headquarters of the U.S. mission to the U.N. in Geneva

References from [1] unless otherwise indicated.