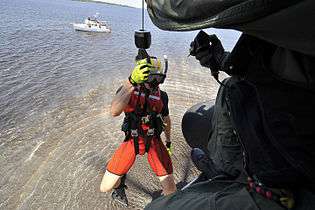 Rescue swimmer is a designation given to Rescue Specialists, most commonly in the service of the military. Rescue Swimmers usually are charged with the rescue, assessment, and rendering of medical aid to persons in distress in the sea, on the land, or in the air. This highly specialized position is extremely challenging and requires an individual to be mentally and physically suited for very stressful and dangerous situations.

The USA has several large divisions of the military organized by land, air, and sea operations. Each of these divisions has their own training and deployment programs for Rescue Swimmers. U.S. Military Rescue Swimmers are considered part of the Special Operations community.[1]

Arguably the most widely recognized team of Rescue Swimmer operators, the elite United States Coast Guard Aviation Survival Technician (AST)/ Helicopter Rescue Swimmers are called upon to respond in the most extreme rescue situations. High seas, medevacs, downed aviators, sinking vessels, and even hurricanes are just a few of the deadly scenarios that Coast Guard Rescue Swimmers are trained to handle. The Coast Guard's entire team of ASTs are composed of only about 350 active duty members, and only 900 members altogether having ever passed the training to become Helicopter Rescue Swimmers since the mid-1980s. The entire list of graduates can be found here.

AST school in Elizabeth City, North Carolina is 24 grueling weeks long, and includes intense physical fitness, long hours of pool fitness and instruction, extreme water confidence drills, and classroom instruction. The Coast Guard Rescue Swimmer training program is very challenging and is one of the toughest U.S. Military training courses. Reportedly, only 75–100 Coast Guard personnel attend the school each year. The attrition rate in some years has been as high as 80%, though the 10 year average is just over 54%. Prospective U.S. Coast Guard Rescue Swimmers are physically conditioned to meet extremely high physical fitness standards. About half of prospective candidates actually make it to AST "A" School. Upon graduation, candidates must attend seven weeks at the Coast Guard's Emergency Medical Technician (EMT) school in Petaluma, California, where ASTs become EMT qualified. Rescue Swimmers at Coast Guard Air Station Sitka, Alaska must maintain the EMT-Intermediate level of proficiency due to the remoteness of their operational area and the number of medevacs performed by that unit each year. Once stationed at a Coast Guard Air Station, Apprentice ASTs must complete 6 months of qualification on their respective airframe before moving on to finish their Rescue Swimmer syllabus and becoming Journeymen.

The Coast Guard also trains a very basic form of life saving swimmers known as Cutter Surface Swimmers. These swimmers deploy only from ships and boats and are tethered to a line handler stationed on board the vessel.

The United States Air Force rescue swimmers are called Pararescuemen, and perform not only sea based but also land based rescues as well.

The most comprehensive component of America's rescue arsenal are the United States Air Force Pararescuemen, although the "rescue swimmer" portion of their duties is sparsely used. Pararescue is a notoriously rigorous CSAR (Combat search and rescue) unit, with eight out of every ten candidates failing the indoctrination course. This gives PJs one of the highest attrition rates of any of America's Special Operations Forces. PJs are an elite special operations component, engaging in combat search and rescue. They are trained as combatants and paramedics, operating on air, sea, and land and are considered, along with Air Force combat controllers, among the most elite of the U.S. military's Special Operations forces.

During war they rescue downed pilots, special operations troops left behind, and other stranded military men and women. Pararescuemen are also active in peacetime, retrieving NASA space equipment, but also performing rescues in all types of natural disasters, though they get much less recognition for this role due to the small numbers of people rescued. The PJs are often sought out for use by other branches of the military, because of their high-quality training and versatility. For example, Air Force pararescuemen can be attached to elite units to provide their expertise for various operations.

Once a Navy rescue swimmer has graduated 'A' School they will go on to their respective Fleet Replacement Squadron (FRS). Here Crewman learn the various systems in the helicopter they will be flying in. They are also expected to know various in-flight procedures such as hoist operating procedures and in-flight trouble-shooting. This syllabus can take from six to twelve months.

The last stop for a Navy rescue swimmer is SERE School (Survival, Evasion, Resistance, and Escape). Upon graduation from the brutal two week course they will go to the fleet as operational rescue swimmers. They will only be considered qualified Aircrewmen once they complete an additional 18-month PQS in their new squadron. Once they are qualified, they are eligible to wear Naval Aircrew wings. 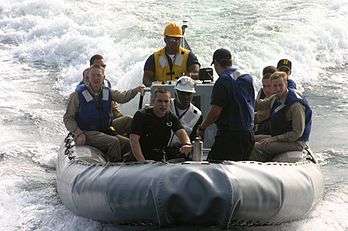 Surface Search and Rescue Swimmer assisting in the transfer of midshipmen

Although women are now allowed to become Rescue Swimmers (Since January 1st 2016) only four women are presently qualified in the Coast Guard, and women must meet the same physical, endurance, and performance standards as men in order to earn a qualification as a Coast Guard rescue swimmer.

The first female Navy rescue swimmer was Catherine Elliott (Rizzo) HMC (AC) USN Ret. she was also the very first woman to graduate from Helicopter Anti-submarine Squadron in Jacksonville, Fl. and become a rescue swimmer on December 16, 1983. The first US Navy female rescue swimmer was at HSL-31, NAS North Island in 1977.

The first female Coast Guard rescue swimmer was Kelly Mogk (later Larson), who joined the Coast Guard in 1984 and later became the first woman to complete Navy Rescue Swimmer School on May 23, 1986.[2][3][4]

On May 2013, the first woman to be advanced to chief petty officer in the rate of aviation survival technician since women were integrated into Coast Guard active duty service in 1973, is Karen Voorhees[5] 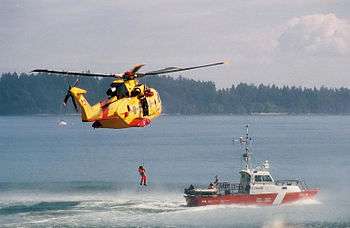 Royal Canadian Air Force Search and Rescue Technicians (SAR TECHs) serve as rescue swimmers. They are military aircrew who deploy from rotary or fixed wing aircraft in any environment or climactic condition. They will locate and penetrate the site, then treat and evacuate casualties.

Qualified SAR TECHs have opportunities for advanced training and promotion. SAR TECHs who demonstrate the required knowledge, experience and leadership skills may also be selected as an instructor at the Canadian Forces School of Search and Rescue (CFSSAR), at 19 Wing Comox, British Columbia.

Most rescue swimmers in Denmark are Danish Air Force personnel from the Danish Transport and Rescue Squadron (Squadron 722 or in Danish Eskadrille 722), and operate from AgustaWestland EH101 helicopters. These rescue swimmers have to be fully qualified as helicopter technicians before they start a 4-week course at the Danish Frogman Corps, followed by a 2-week first aid/PHTLS course.

Other rescue swimmers are members of the Danish Navy and operate from Westland Lynx Mk 90B helicopters based on a Thetis-class ocean patrol vessels in the waters around Greenland, Faroe Islands and sometimes also Iceland. These swimmers are generally recruited from the diver-corps (which has a 6–10 weeks diving course from the Danish Navy Diving School) and receive basic helicopter crash survival training.

Finally some coast-based rescue swimmers with high-speed boats are stationed around the coasts of Denmark. These are trained by either the Danish national guard or Danish Maritime Safety Administration (Danish: Farvandsvæsnet).

Rescue swimmers in the media

The release of the 2006 motion picture The Guardian, starring Kevin Costner and Ashton Kutcher, introduced people to this small group of elite rescue workers.

A rescue jumper/swimmer needs to jump from the helicopter because the victims are not able to get into the basket due to wave action.

On the History Channel reality show Top Shot one of the marksman is US Navy Rescue Swimmer Jamie Franks.

U.S. Coast Guard Rescue Swimmers attracted international attention most recently during the rescue operations following Hurricane Katrina in New Orleans, Louisiana and the surrounding areas. It was reported that in the first five days following Katrina, Coast Guard crews performed more than 33,500 rescue and hoist operations of Katrina victims stranded on rooftops and in flood water. This was reportedly more than the Coast Guard had rescued worldwide in over 50 years. President George W. Bush awarded participating members of the Coast Guard a Presidential Unit Citation and ribbon for their response to Hurricane Katrina.

While Katrina brought domestic and international news coverage to Coast Guard rescue swimmers and their crews, their story was first shown on television in a series of 1999 specials on Discovery Channel, Coast Guard: Rescue Swimmers and Coast Guard: Helicopters to the Rescue. Along with covering the history and the demanding training rescue swimmers must complete, the specials also feature dramatic on-scene footage of several heroic rescues.

The most viewed rescue swimming event in the media was a marine rescue done by rescue swimmers during the Webtel.mobi Intercontinental Challenge on 25 November 2009. The Webtel.mobi Intercontinental Challenge was the first attempted intercontinental flight between Africa and Europe by man using jetwings, and it was broadcast live worldwide on television. Swiss pilot Yves Rossy, the person who had accepted the Webtel.mobi Intercontinental Challenge, had to ditch into the North Atlantic ocean midway through the 30 mile flight from Morocco to Spain, after his wing was destabilized by a large cumulonimbus cloud. After being located, an emergency marine rescue was undertaken by rescue swimmers live on television, with the Associated Press reporting that more than two billion people had viewed the rescue worldwide on the day of broadcast. The rescue swimmers for this event were Stuart Sterzel and Garth Eloff, both former Special Operators from Special Forces. Stuart Sterzel was also the CEO of Webtel.mobi, the company staging the event. A third standby rescue swimmer was John Brokaar, also a former Special Operator from Special Forces. The rescue took place in extremely dangerous conditions in the North Atlantic, with the downed pilot being located in less than 15 minutes after his ditched entry into the ocean, in an area where the average time for locating a person in the water is four hours. Once located, he was extracted from the water in a flawless marine rescue. The success of the rescue was credited to the rescue rehearsal carried out on the day before the event, which was also televised worldwide as it happened. The rehearsal took place during a rough sea state and high winds, and was done to confirm that the rescue swimmers would be able to carry out an effective rescue in the dangerous conditions in the area, which include very strong rip currents, high swells and the cold water temperature in the North Atlantic. On the day of the rehearsal the rough sea state and high winds forced Sterzel and Eloff to exit into the North Atlantic ocean from the skid of a Bell helicopter at a height of over 40 feet, which causes significant water entry shock on entry. The water entry shock was reduced only by their succeeding in entering the water at an optimal entry angle despite the high wind and an unstable exit platform. This was attributed to their previous training and experience.

The movement of titanium/nickel rotor blades used in many military helicopters through the air generates static electricity which is then accumulated in the aircraft during flight. Prior to conducting operations such as in-flight refueling, vertical cargo replenishment, or shipboard passenger hook-ups, the rescue hoist is grounded with a grounding hook, as the presence of this high electrostatic potential energy represents various hazards, such as shock, fire or explosions in the presence of personnel, fuel and ordinance.