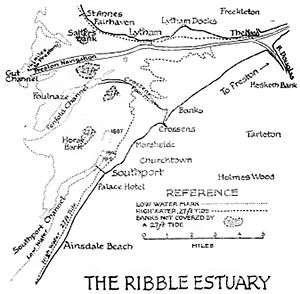 The Ribble and Alt Estuaries lie on the Irish Sea coast of the counties of Lancashire and Merseyside in north-west England, and form the boundaries of a number of nature preservation schemes.

A large number of different species of waders and wildfowl, listed below, use the estuaries as feeding and over-wintering areas. This wide variety of bird species has led to the estuaries being officially designated as a Special Protection Area and as a Ramsar site. The Ribble Estuary has been designated a Site of Special Scientific Interest since 1966 and is now covered by Natural England's Ribble Estuary National Nature Reserve.

This article is issued from Wikipedia - version of the 4/23/2015. The text is available under the Creative Commons Attribution/Share Alike but additional terms may apply for the media files.