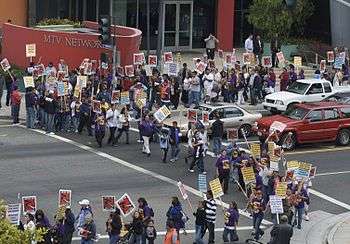 Janitorial workers exercising their right to protest in front of the MTV building in Santa Monica, California.

Many international treaties contain clear enunciations of these rights. Such agreements include the 1950 European Convention on Human Rights, especially Articles 9 to 11; and the 1966 International Covenant on Civil and Political Rights, especially Articles 18 to 22. However, in these and other agreements the rights of freedom of assembly, freedom of association, and freedom of speech are subject to certain limitations. For example, the International Covenant on Civil and Political Rights contains prohibitions on "propaganda of war" and advocacy of "national, racial or religious hatred"; and it allows the restriction of the freedom to assembly if it is necessary "in a democratic society in the interests of national security or public safety, public order, the protection of public health or morals or the protection of the rights and freedoms of others." (Articles 20 and 21.)

Protesting, however, is not necessarily violent or a threat to the interests of national security or public safety. Nor is it necessarily civil disobedience, because most protest does not involve violating the laws of the state. Protests, even campaigns of nonviolent resistance or civil resistance, can often have the character (in addition to using nonviolent methods) of positively supporting a democratic and constitutional order. This can happen, for example, when such resistance arises in response to a military coup d'état;[2] or in the somewhat similar case of a refusal of the state leadership to surrender office following defeat in an election.