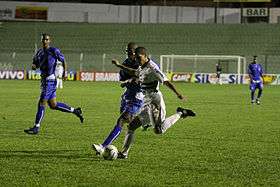 In 1999, the club won its first title, the Campeonato Paulista Third Level, beating Oeste in the final.[2]

In 2007, Rio Preto for the first time ever was promoted to Campeonato Paulista Série A1.[3]

The club's mascot is a yacare caiman, usually known as jacaré, which is the animal's Portuguese name.[5]

The women have won the national championship, the Campeonato Brasileiro de Futebol Feminino in 2015. [8]