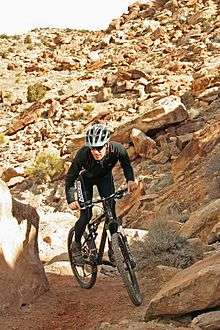 A cross-country mountain biker on a trail in Utah.

Cross-country cycling is defined by the terrain on which it is performed. XC courses and trails consist of a mix of rough forest paths and singletrack (also referred to as doubletrack depending on width), smooth fireroads, and even paved paths connecting other trails. Most cross-country trails are deemed "easy" or "intermediate", however, some paths can be difficult, even for experienced riders, such as the trails used during the Summer Olympic Games. 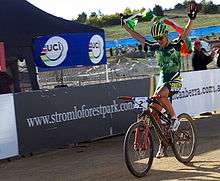 Cross-country bicycles are some of the lightest mountain bikes, typically between 7 and 16 kilograms (15 and 35 lb). They usually feature suspension forks in front and sometimes have suspension in the rear. In both the front and rear, most XC bicycles have approximately 100 millimetres (10.0 cm; 3.9 in) of suspension travel, although some riders prefer 125 to 150 millimetres (12.5 to 15.0 cm; 4.9 to 5.9 in) of travel as bicycle frame strength and technology advance. The geometry of the frames generally place the rider in a little more upright position than on a road bicycle but much less than on a downhill bike.

Bicycle helmets are often used for cross-country riding.[2] However, XC riders only rarely wear full-face helmets and do not wear the full body "armour" employed by downhill riders. Cross-country cyclists are more prone to injuries than road cyclists; however, the injuries sustained by XC riders are usually not as severe.[3]

While less publicized than downhill cycling as it is more difficult to televise, it garners the highest levels of participation both recreationally and competitively. Cross-country racing emphasizes endurance above technical prowess, and races vary from 30 minutes to 24 hours in length. Additionally, many mountain bike races are divided up into stages so as to span several days. Races can be either point-to-point or lap-based. Short-track cross-country consists of many very short laps so as to be spectator-friendly.

Unlike downhill races, which are conducted in a time trial format, cross-country races traditionally feature a mass start or interval start, where riders are released in several large groups divided by age and/or ability. Races with very large fields that do not wish to stagger starts will sometimes employ a Le Mans start where racers begin by running to their bikes.

Start line for the under 23 men's cross-country race at the 2009 UCI World Championships.

Globally, XC racing is governed by the Union Cycliste Internationale. In the United States, it is under the purview of USACMTB a division of USA Cycling. In the United Kingdom, British Cycling is the governing body.

A race where the last person or the last two people who go through the finish line are out of the race.

Consists of a lap racing around a short circuit. It's the only discipline which is in the Olympics, and high mountain bike skills are required.

With a route usually between 65 and 100 km. It has gained popularity in the last years, because XCM competition participation is open to everyone, including beginners. Just finishing the race is an achievement for some people. 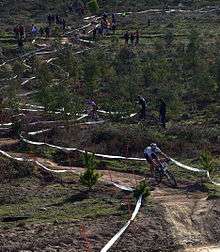 Course used at the 2009 UCI World Championships in Australia.

In cross-country, more than other areas of mountain biking, a debate has begun over the optimal wheel size. The 26-inch wheel size that was settled on with the inception of the current age of mountain biking has all but died off at the top level of cross-country racing as 27.5 and 29 inch wheels are much more popular now. 650b wheels are 584 mm diameter wheels, and approximately 27.5" with a mounted tire. 29" wheels are basically wider equivalents of the road-going 700c format, being 29" with mounted tires.

650b bikes are becoming ever more prevalent , while 29" bikes, or "29ers" experienced rapidly gaining popularity in the mid to late 2000s, and having some success in cross-country racing, but more so in marathon cross-country. A notable boost to their popularity came with Lance Armstrong, racing and winning on a Gary Fisher 29er.[4] Advantages to the larger wheel formats are less need for suspension due to a decreased angle of attack, and also less loss of momentum. Disadvantages include increased weight, decreased acceleration, higher rolling inertia, rider fit issues for those under 5'5" (165 cm), and slower handling, although handling issues are being addressed successfully in newer designs with geometry changes like steeper head tube angles and higher fork offsets. A further disadvantage is that, all other variables (spoke number, rim design and material, etc.) being equal, a 26" wheel will be much stronger than a 29" one.