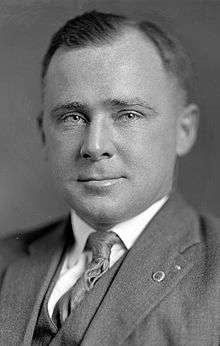 Simmons was born on December 25, 1891 near Scottsbluff, Nebraska. He attended Hastings College from 1909 to 1911 and the University of Nebraska–Lincoln in 1915. He was admitted to the bar in 1915 and set up practice in Gering, Nebraska. He was elected prosecuting attorney of Scotts Bluff County in 1916. During the first World War, on October 15, 1917, he enlisted in the army. He was commissioned as a second lieutenant in the Air Service on March 12, 1918 and was discharged on January 14, 1919.

He was elected as a Republican to the 68th through 72nd congresses (March 4, 1923 - March 3, 1933) to represent Nebraska's 6th district. When Nebraska lost a district, he ran and lost in the preceding new district in 1932. He ran for the U.S. Senate in 1934 against Edward R. Burke and in 1936 against George W. Norris, losing both times. He resumed practicing law in Lincoln, Nebraska. He was elected chief justice of Nebraska in 1938. He was also a deputy judge in the administrative tribunal of the International Labour Organization in Geneva, Switzerland, in 1955. While serving as Chief Justice, along with the chief justices of New Jersey, Arthur T. Vanderbilt, and Missouri, Laurance M. Hyde, he co-founded the Conference of Chief Justices in 1949. He retired in January 1963 after 24 years as the chief justice of Nebraska.

He returned to private law in Lincoln, Nebraska. He died in Lincoln on December 27, 1969 and is interred in Fairview Cemetery, Scottsbluff.