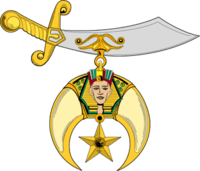 Shriners International, also commonly known as The Shriners, is a society established in 1870 and is headquartered in Tampa, Florida, USA.[1] It is an appendant body to Freemasonry.

Shriners International describes itself as a fraternity based on fun, fellowship, and the Masonic principles of brotherly love, relief, and truth. There are approximately 350,000 members from 195 temples (chapters) in the U.S., Canada, Brazil, Mexico, the Republic of Panama, the Philippines, Puerto Rico, Europe, and Australia. The organization is best known for the Shriners Hospitals for Children that it administers, and the red fezzes that members wear.

The organization was previously known as Ancient Arabic Order of the Nobles of the Mystic Shrine (A.A.O.N.M.S.) or Shriners North America. The name was changed in 2010 across North America, Central America, South America, Europe, and Southeast Asia.[2]

In 1870, there were several thousand Masons in Manhattan, many of whom lunched at the Knickerbocker Cottage at a special table on the second floor. There, the idea of a new fraternity for Masons stressing fun and fellowship was discussed. Walter M. Fleming, M.D., and William J. Florence took the idea seriously enough to act upon it. 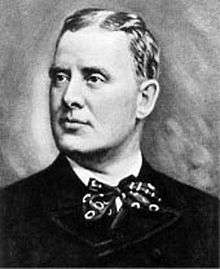 Florence, a world-renowned actor, while on tour in Marseille, was invited to a party given by an Arabian diplomat. The entertainment was something in the nature of an elaborately staged musical comedy. At its conclusion, the guests became members of a secret society. Florence took copious notes and drawings at his initial viewing and on two other occasions, once in Algiers and once in Cairo. When he returned to New York in 1870, he showed his material to Fleming.[3] 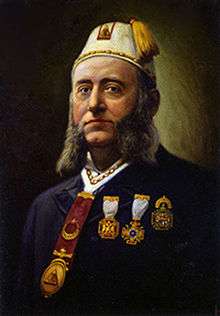 Fleming took the ideas supplied by Florence and converted them into what would become the "Ancient Arabic Order of the Nobles of the Mystic Shrine (A.A.O.N.M.S.)". Fleming created the ritual, emblem and costumes. Florence and Fleming were initiated August 13, 1870, and initiated 11 other men on June 16, 1871.[4]

The group adopted a Middle Eastern theme and soon established Temples (though the term Temple has now generally been replaced by Shrine Auditorium or Shrine Center). The first Temple established was Mecca Temple (now known as Mecca Shriners), established at the New York City Masonic Hall on September 26, 1872. Fleming was the first Potentate.[5]

In 1875, there were only 43 Shriners in the organization. In an effort to spur membership, at the June 6, 1876 meeting of Mecca Temple, the Imperial Grand Council of the Ancient Order of the Nobles of the Mystic Shrine for North America was created. Fleming was elected the first Imperial Potentate. After some other reworking, by 1878 there were 425 members in 13 temples in eight states, and by 1888, there were 7,210 members in 48 temples in the United States and Canada. By the Imperial Session held in Washington, D.C. in 1900, there were 55,000 members and 82 Temples.[6]

By 1938 there were about 340,000 members in the United States. That year Life published photographs of its rites for the first time. It described the Shriners as "among secret lodges the No. 1 in prestige, wealth and show", and stated that "[i]n the typical city, especially in the Middle West, the Shriners will include most of the prominent citizens."[7]

Shriners often participate in local parades, sometimes as rather elaborate units: miniature vehicles in themes (all sports cars; all miniature 18-wheeler trucks; all fire engines, and so on), an "Oriental Band" dressed in cartoonish versions of Middle Eastern dress; pipe bands, drummers, motorcycle units, Drum and Bugle Corps, and even traditional brass bands.

Despite its Orientalist theme, the Shrine is a men's fraternity, not connected to either Arab culture or Islam. Its only religious requirement is indirect: all Shriners must be Masons (with the exception being in the State of Arkansas)[8] and petitioners to Freemasonry must profess a belief in a Supreme Being. To further minimize confusion with religion, the use of the words "temple" and "mosque" to describe Shriners' buildings has been replaced by "Shrine Center", although some individual local chapters are still called Temples.

Until 2000, before being eligible for membership in the Shrine, a Mason had to complete either the Scottish Rite or York Rite systems,[9] but now any Master Mason can join.[10] 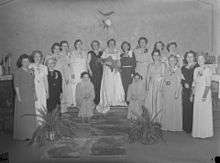 Daughters of the Nile at Montreal Shriner's Hospital in 1948.

While there are plenty of activities for Shriners and their wives, there are two organizations tied to the Shrine that are for women only: The Ladies' Oriental Shrine and the Daughters of the Nile. They both support the Shriners Hospitals and promote sociability, and membership in either organization is open to any woman 18 years of age and older who is related to a Shriner or Master Mason by birth, marriage, or adoption.

The Shrine's charitable arm is the Shriners Hospitals for Children, a network of twenty-two hospitals in the United States, Mexico, and Canada. In June 1920, the Imperial Council Session voted to establish a "Shriners Hospital for Crippled Children." The purpose of this hospital was to treat orthopedic injuries, diseases, and birth defects in children.[14]

After much research and debate, the committee chosen to determine the site of the hospital decided there should be not just one hospital but a network of hospitals spread across North America. The first hospital was opened in 1922 in Shreveport, Louisiana, and by the end of the decade 13 more hospitals were in operation.[14] Shriners Hospitals now provide orthopedic care, burn treatment, cleft lip and palate care, and spinal cord injury rehabilitation.

The rules for all of the Shriners Hospitals are simple and to the point: Any child under the age of 18 can be admitted to the hospital if, in the opinion of the doctors, the child can be treated.[14][15] There is no requirement for religion, race, or relationship to a Shriner.

Until June 2012, all care at Shriners Hospitals was provided without charge to patients and their families. At that time, because the size of their endowment had decreased due to losses in the stock market, Shriners Hospitals started billing patients' insurance companies, but still offered free care to children without insurance and waives all out of pocket costs insurance does not cover. 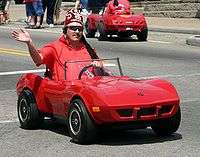 Most Shrine Temples support several parade units. These units are responsible for promoting a positive Shriner image to the public by participating in local parades. The parade units often include miniature cars powered by lawn mower engines.

A St. Louis Shriner in a miniature racing car, stopping to greet children along parade route

An example of a Shrine parade unit is the Heart Shrine Clubs’ Original Fire Patrol of Effingham, Illinois. This unit operates miniature fire engines, memorializing a hospital fire that took place in the 1940s in Effingham. They participate in most parades in a 100-mile radius of Effingham. Shriners in Dallas, Texas participate annually in the Twilight Parade at the Texas State Fair.

Shriners in St. Louis have several parade motor units, including miniature cars styled after 1932 Ford coupes and 1970s-era Jeep CJ models, and a unit of miniature Indianapolis-styled race cars. Some of these are outfitted with high-performance, alcohol-fueled engines. The drivers' skills are demonstrated during parades with high-speed spinouts. 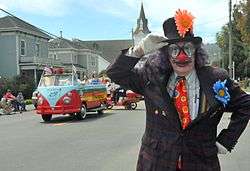 The Shriners are committed to community service and have been instrumental in countless public projects throughout their domain.

Once a year, the fraternity meets for the Imperial Council Session in a major North American city. It is not uncommon for these conventions to have 20,000 participants or more, which generates significant revenue for the local economy.

Many Shrine Centers also hold a yearly Shrine Circus as a fundraiser.