Rock on the Range

Rock on the Range is an annual rock festival featuring mostly mainstream rock bands, with a classic band usually headlining the show. The festival is held at two venues; MAPFRE Stadium in Columbus, Ohio and Canad Inns Stadium in Winnipeg, Manitoba. Rock on the Range debuted in Columbus on May 19, 2007 and in Winnipeg on June 27, 2009. It was founded by and is co-produced by Danny Wimmer.[1]

Main article: List of Rock on the Range lineups by year

The first Rock on the Range was held on May 19, 2007 at Columbus Crew Stadium. The sold-out festival ran all day, beginning around noon and ending after 11:00 pm. Due to such success, Rock on the Range was turned into an annual event by returning to Columbus Crew Stadium in 2008. The second festival was a two-day event held on the weekend of May 17–18, 2008. This show had the very first Stone Temple Pilots performance in seven years, ending the band's hiatus.[2] The 2009 show was two days as well, on the weekend of May 16–17, 2009. The lineup was announced on Rock on the Range's official website on Friday, February 13, 2009. For the 2010 festival, each stage has its own sponsor. While the Jägermeister Music Stage is still the same, the "second" stage and the main stage (as they have been previously called) are now referred to as the Kicker Stage and the Monster Energy Stage, respectively. Other sponsors host their own events, such as Sony's PlayStation bus that demos new video games. An FYE tent is located near the Kicker Stage where, upon purchase of certain bands' CDs, many meet-and-greets take place.

The festival usually draws more than 30,000 fans each day onto the Columbus Crew Stadium grounds from its inception but in recent years that number has swelled to approximately 40,000 per day. This has occurred mainly due to a rise in the festivals popularity as well as some changes to the festival grounds layout and expansion of the number of festival days.

In 2007 and 2008, two stages were set up: The main stage is inside the stadium at one end of the soccer field, and the second stage is in the parking lot just outside the stadium. For the 2009 show, a third stage was added, the Jägermeister Music Stage. It is located outside of the stadium on the opposite side of the second stage. The typical ticket price in the past, and for 2010 as well, is around $50–65 per day, depending on whether attendees choose to have field-access or not. Rock on the Range 2009 was Avenged Sevenfold's last appearance in the United States before their drummer, Jimmy "The Rev" Sullivan died on December 28, 2009. During their performance on May 22, 2010, the music video for Papa Roach's single "Kick in the Teeth" was filmed.

In 2011 and 2012 the festival saw a major change and was expanded to include an additional half-day Friday Night Pre-party that saw the addition of four more bands being added for the party.

In 2013 it was announced that the pre-party day will be made into another full day by adding six more bands to the previous four bands to officially make the festival a three-day event. Also, new to this event year is an updated festival layout and new amenities including a comedy tent and stage, thanks to sponsors Old Milwaukee, Pabst Blue Ribbon and The Funny Bone.

In 2014 it was announced that the third day added in 2013 would be expanded time wise to allow for additional bands to be added to the line-up. The comedy tent and stage added in 2013 will also be returning. Also, new was an updated festival layout with the addition of carnival rides including a Ferris wheel and a Shock drop. 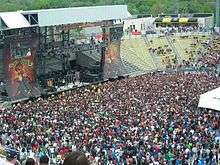 f.y.e. stage only (all four bands)