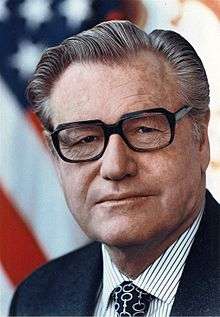 The Rockefeller Republicans, otherwise called Liberal Republicans, were members of the Republican Party (GOP) in the 1940s–1970s who held moderate to liberal views on domestic issues, similar to those of Nelson Rockefeller, Governor of New York (1959–1973) and Vice President of the United States (1974–1977). Rockefeller Republicanism has been described as the last phase of the "Eastern Establishment" of the GOP, which had been led by New York governor Thomas E. Dewey. The group's powerful role in the GOP came under heavy attack in 1964 and it lost most of its influence. At a discouraging point in the 1964 primary campaign against Barry Goldwater in California, political operative Stuart Spencer called on Rockefeller to "summon that fabled nexus of money, influence, and condescension known as the Eastern Establishment. 'You are looking at it, buddy,' Rockefeller told Spencer. 'I am all that is left.'"[1]

The term largely fell out of use by the end of the twentieth century, and has been replaced by the term "moderate Republican". Rockefeller Republicans were typically moderate to center-right, vehemently rejected conservatives like Barry Goldwater and his policies, and were often culturally liberal. They espoused government and private investments in environmentalism, healthcare, and higher education as necessities for a better society and economic growth, in the tradition of Rockefeller. In general, Rockefeller Republicans opposed socialism and government ownership. They supported some regulation of business and many New Deal–style social programs. A critical element was their support for labor unions. The building trades, especially, appreciated the heavy spending on infrastructure. In turn, the unions gave these politicians enough support to overcome the anti-union rural element in the Republican Party. As the unions weakened after the 1970s, so too did the need for Republicans to cooperate with them. This transformation played into the hands of the more conservative Republicans, who did not want to collaborate with labor unions in the first place, and now no longer needed to do so to carry statewide elections.[2]

In foreign policy, most wanted to use American power in cooperation with allies to fight against the spread of communism. They wanted to help American business expand abroad. Richard Nixon, a moderate establishment Republican within the Party's contemporary ideological framework, but who ran against Rockefeller from the right in 1968 and was widely identified with the cultural right of the time, nevertheless was influenced by this tradition within his party. Nixon set up the Environmental Protection Agency, supported expanded welfare programs, imposed wage and price controls, and in 1971 announced he was a Keynesian.[3] Rockefeller Republicans were most common in the Northeast and the West Coast, with their larger liberal constituencies; they were rare in the South and Midwest.[4]

Role in the American 20th century

Thomas E. Dewey, the Governor of New York from 1942 to 1954 and the Republican presidential nominee in 1944 and 1948, was the leader of the moderate wing of the Republican Party in the 1940s and early 1950s, battling conservative Republicans from the Midwest led by Senator Robert A. Taft of Ohio, known as "Mr. Republican". With the help of Dewey, General Dwight D. Eisenhower defeated Taft for the 1952 presidential nomination and became the leader of the moderates. Eisenhower coined the phrase "Modern Republicanism" to describe his moderate vision of Republicanism.

After Vice President Rockefeller left the national stage in 1976, this faction of the party was more often called "moderate Republicans" or Nixonians, in contrast to the conservatives who rallied to Ronald Reagan. Rockefeller Republicans included moderates such as Senator Margaret Chase Smith and liberals such as Jacob Javits.

Historically, Rockefeller Republicans were moderate or liberal on domestic and social policies. They typically favored New Deal programs and a social safety net; they sought to run these programs more efficiently than the Democrats.[7] Rockefeller Republicans also saw themselves as champions of "good government", contrasting themselves to the often corrupt machine politics of the Democratic Party (particularly in large cities). They were strong supporters of big business and Wall Street; many Republicans of the Eisenhower-Rockefeller vein were major figures in business, such as auto executive George W. Romney and investment banker C. Douglas Dillon. In fiscal policy they favored balanced budgets, and were not averse to raising taxes in order to achieve them; Connecticut Senator Prescott Bush once called for Congress to "raise the required revenues by approving whatever levels of taxation may be necessary".[8]

In state politics, they were strong supporters of state colleges and universities, low tuition, and large research budgets. They favored infrastructure improvements, such as highway projects. In foreign policy, they tended to be Hamiltonian, espousing internationalist and realist policies, supporting the United Nations, and promoting American business interests abroad.

Barry Goldwater crusaded against the Rockefeller Republicans, beating Rockefeller narrowly in the California primary of 1964. That set the stage for a conservative resurgence, based in the South and West in opposition to the Northeast Rockefeller wing. However, in 1968 the moderate contingent captured control of the GOP again and nominated Richard Nixon. He was easily reelected in 1972 and after he resigned, moderate-to-conservative Republican Gerald Ford replaced him as President. Four years after nearly toppling the incumbent Ford in the 1976 presidential primaries, Ronald Reagan won the party's presidential nomination at the 1980 convention, and served two terms in the White House. By 1988, the Republicans had chosen Prescott Bush's son, George H. W. Bush as its presidential candidate on a conservative platform. Bush's national convention pledge to stave off new taxation were he elected president ("Read my lips: no new taxes!") marked the candidate's full conversion to the conservative movement and, perhaps, the political death knell for Rockefeller Republicanism as a prevailing force within Party politics.

The Rockefeller Republican label is sometimes applied to such modern-day politicians as Lincoln Chafee of Rhode Island, who served as a Republican in the U.S. Senate before being elected that state's governor as an independent. He later became a Democrat and briefly sought that party's 2016 presidential nomination.[9]

Ethnic changes in the Northeast may have led to the demise of the Rockefeller Republican. Many Republican leaders associated with this title were WASPs like Charles Mathias of Maryland. Liberal New York Republican U.S. Senator Jacob Javits, who had an Americans for Democratic Action rating above 90% and an American Conservative Union rating below 10%, was Jewish. As time went on, the local Republican parties tended to nominate Catholic candidates who appealed to middle class, social values–laden concerns, such as George Pataki, Al D'Amato, Rick Lazio, Tom Ridge, and others, who in many cases represented the party's diversity more on the basis of religion and were often otherwise like their Protestant conservative counterparts.