In economics, protectionism is the economic policy of restraining trade between states (countries) through methods such as tariffs on imported goods, restrictive quotas, and a variety of other government regulations. Protectionist policies protect the producers, businesses and workers of the import-competing sector in a country from foreign competitors.[1] According to proponents, these policies can counteract unfair trade practices, to allow fair competition between imports and goods and services produced domestically. Protectionists may favor the policy in order to decrease the trade deficit, maintain employment in certain sectors, or favor the growth of certain industries.[2] In recent years, protectionism has become closely aligned with the anti-globalization movement.[3]

The doctrine of protectionism contrasts with the doctrine of free trade, where governments reduce as much as possible the barriers to trade. There is a broad consensus among economists that the impact of protectionism on economic growth (and on economic welfare in general) is largely negative, although the impact on specific industries and groups of people may be positive.[4]

A variety of policies have been used to achieve protectionist goals. These include:

In the modern trade arena many other initiatives besides tariffs have been called protectionist. For example, some commentators, such as Jagdish Bhagwati, see developed countries efforts in imposing their own labor or environmental standards as protectionism. Also, the imposition of restrictive certification procedures on imports are seen in this light.

Further, others point out that free trade agreements often have protectionist provisions such as intellectual property, copyright, and patent restrictions that benefit large corporations. These provisions restrict trade in music, movies, pharmaceuticals, software, and other manufactured items to high cost producers with quotas from low cost producers set to zero.[6][7]

Historically, protectionism was associated with economic theories such as mercantilism (that believed that it is beneficial to maintain a positive trade balance), and import substitution. During that time, Adam Smith famously warned against the "interested sophistry" of industry, seeking to gain advantage at the cost of the consumers.[8] Friedrich List saw Adam Smith's views on free trade as disingenuous and really in support of a long-term British program for economic domination.[9]

According to Michael Lind, protectionism was the policy of the United States from the passage of the Tariff of 1816 to World War II, "switching to free trade only in 1945, when most of its industrial competitors had been wiped out" by the war.[10] In the late 19th Century, Germany, too, used protectionist measures to grow its industry.[11] After World War II, Japan followed that model.[12] It has been argued that Deng Xiaoping's post-Mao policies were inspired by List,[13] and that policies in India after independence were, as well.[14][15]

The first U.S. Secretary of the Treasury, Alexander Hamilton, advocated tariffs to help protect infant industries in his "Report on Manufactures." For the most part, the "Jeffersonians" strongly opposed it. In the 19th century, statesmen such as Senator Henry Clay continued Hamilton's themes within the Whig Party under the name "American System."

The fledgling Republican Party led by Abraham Lincoln, who called himself a "Henry Clay tariff Whig", strongly opposed free trade and implemented a 44-percent tariff during the Civil War—in part to pay for railroad subsidies and for the war effort, and to protect favored industries.[16] William McKinley (later to become President of the United States) stated the stance of the Republican Party (which won every election for President from 1868 until 1912, except the two non-consecutive terms of Grover Cleveland) as thus:

Under free trade the trader is the master and the producer the slave. Protection is but the law of nature, the law of self-preservation, of self-development, of securing the highest and best destiny of the race of man. [It is said] that protection is immoral…. Why, if protection builds up and elevates 63,000,000 [the U.S. population] of people, the influence of those 63,000,000 of people elevates the rest of the world. We cannot take a step in the pathway of progress without benefitting mankind everywhere. Well, they say, 'Buy where you can buy the cheapest'…. Of course, that applies to labor as to everything else. Let me give you a maxim that is a thousand times better than that, and it is the protection maxim: 'Buy where you can pay the easiest.' And that spot of earth is where labor wins its highest rewards.[17]

In Kicking Away the Ladder, development economist Ha-Joon Chang reviews the history of free trade policies and economic growth, and notes that many of the now-industrialized countries had significant barriers to trade throughout their history. The United States and Britain, sometimes considered the homes of free trade policy, employed protectionism to varying degrees at all times. Britain abolished the Corn Laws, which restricted import of grain, in 1846 in response to domestic pressures, and it reduced protectionism for manufactures in the mid 19th century, when its technological advantage was at its height, but tariffs on manufactured products had returned to 23% by 1950. The United States maintained weighted average tariffs on manufactured products of approximately 40–50% up until the 1950s, augmented by the natural protectionism of high transportation costs in the 19th century.[18] The most consistent practitioners of free trade have been Switzerland, the Netherlands, and to a lesser degree Belgium.[19] Chang describes the export-oriented industrialization policies of the Four Asian Tigers as "far more sophisticated and fine-tuned than their historical equivalents".[20]

Protectionists believe that there is a legitimate need for government restrictions on free trade in order to protect their country’s economy and its people’s standard of living, for example Pres. William McKinley in 1892:[21]

Protectionists believe that infant industries must be protected in order to allow them to grow to a point where they can fairly compete with the larger mature industries established in foreign countries. They believe that without this protection, infant industries will die before they reach a size and age where economies of scale, industrial infrastructure, and skill in manufacturing have progressed sufficiently to allow the industry to compete in the global market.

Opponents of free trade have argued that comparative advantage does not apply in a globally integrated world, in which capital is free to move internationally. Protectionists point to the shifting of production to Mexico by US companies after the passing of the North American Free Trade Agreement as support for this argument. Herman Daly argues that: "Free capital mobility totally undercuts Ricardo's comparative advantage argument for free trade in goods, because that argument is explicitly and essentially premised on capital (and other factors) being immobile between nations. Under the new global economy, capital tends simply to flow to wherever costs are lowest—that is, to pursue absolute advantage."[22]

-Protectionism is frequently criticized by economists as harming the people it is meant to help. Mainstream economists instead support free trade.[8][23] The principle of comparative advantage shows that the gains from free trade outweigh any losses as free trade creates more jobs than it destroys because it allows countries to specialize in the production of goods and services in which they have a comparative advantage.[24] Protectionism results in deadweight loss; this loss to overall welfare gives no-one any benefit, unlike in a free market, where there is no such total loss. According to economist Stephen P. Magee, the benefits of free trade outweigh the losses by as much as 100 to 1.[25]

Economists, including Nobel prize winners Milton Friedman and Paul Krugman [4] believe that free trade helps workers in developing countries, even though they are not subject to the stringent health and labour standards of developed countries. This is because "the growth of manufacturing — and of the myriad other jobs that the new export sector creates — has a ripple effect throughout the economy" that creates competition among producers, lifting wages and living conditions.[26] Economists have suggested that those who support protectionism ostensibly to further the interests of workers in least developed countries are in fact being disingenuous, seeking only to protect jobs in developed countries.[27] Additionally, workers in the least developed countries only accept jobs if they are the best on offer, as all mutually consensual exchanges must be of benefit to both sides, or else they wouldn't be entered into freely. That they accept low-paying jobs from companies in developed countries shows that their other employment prospects are worse. A letter reprinted in the May 2010 edition of Econ Journal Watch identifies a similar sentiment against protectionism from 16 British economists at the beginning of the 20th century.[28]

Alan Greenspan, former chair of the American Federal Reserve, has criticized protectionist proposals as leading "to an atrophy of our competitive ability. ... If the protectionist route is followed, newer, more efficient industries will have less scope to expand, and overall output and economic welfare will suffer."[29]

Protectionism has also been accused of being one of the major causes of war. Proponents of this theory point to the constant warfare in the 17th and 18th centuries among European countries whose governments were predominantly mercantilist and protectionist, the American Revolution, which came about ostensibly due to British tariffs and taxes, as well as the protective policies preceding both World War I and World War II. According to a slogan of Frédéric Bastiat (1801–1850), "When goods cannot cross borders, armies will."[30] 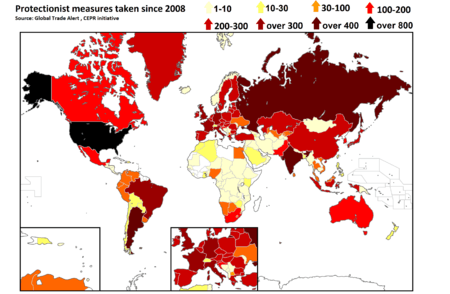 Protectionist measures taken since 2008 according to Global Trade Alert.[31]

Since the end of World War II, it has been the stated policy of most First World countries to eliminate protectionism through free trade policies enforced by international treaties and organizations such as the World Trade Organization[32] Certain policies of First World governments have been criticized as protectionist, however, such as the Common Agricultural Policy[33] in the European Union, longstanding agricultural subsidies and proposed "Buy American" provisions[34] in economic recovery packages in the United States .

Heads of the G20 meeting in London on 2 April 2009 pledged "We will not repeat the historic mistakes of protectionism of previous eras". Adherence to this pledge is monitored by the Global Trade Alert,[35] providing up-to-date information and informed commentary to help ensure that the G20 pledge is met by maintaining confidence in the world trading system, detering beggar-thy-neighbor acts, and preserving the contribution that exports could play in the future recovery of the world economy. Although they were reiterating what they had already committed to, last November in Washington, 17 of these 20 countries were reported by the World Bank as having imposed trade restrictive measures since then. In its report, the World Bank says most of the world's major economies are resorting to protectionist measures as the global economic slowdown begins to bite. Economists who have examined the impact of new trade-restrictive measures using detailed bilaterally monthly trade statistics estimated that new measures taken through late 2009 were distorting global merchandise trade by 0.25% to 0.5% (about $50 billion a year).[36]

Since then however, President-elect Donald Trump announced in November 2016 that he would abandon the TPP (Trans-Pacific Partnership) deal, placing the protectionist policies reflected in Trumponomics very much on the table, despite the wishes of all the other G20 nations.