Rosedale is an unincorporated community and census-designated place in Baltimore County, Maryland. The population was 19,257 at the 2010 United States Census.[1]

Rosedale, a community northeast of the city of Baltimore, was a farming community from the time of the first settlers until suburban development began after World War II. Maryland Route 7, which runs through the community, was originally the Philadelphia Road, which carried George Washington to New York in 1789 where he was inaugurated as the first American president.

The origin of the name Rosedale is not documented with certainty. However, a 1950 fourth grade class was told to interview family and friends about the history of the Rosedale community. From that activity came an explanation.

There was a young Englishman who had a farm on Hamilton Avenue just above Philadelphia Road which was covered with beautiful roses. Since his name was Dale and since the roses were so lovely, they felt that Rosedale would be an appropriate name.

The area was settled by many German and Polish immigrants in the latter part of the nineteenth century. An article written in 1940 on the occasion of their 59th wedding anniversary tells the story of one long-time farming family in the area.

Charles Schatzschneider was born in Germany in 1859 and came to Rosedale to do farm labor at age 13. He and his wife raised 15 children and saw the area grow from a wilderness to what they saw as a highly developed community with gas and electric lighting, water and sewerage systems and paved streets. The new electric trains which whizzed past their farm were a wonder to them.

When they came to the area, great three-masted schooners could sail all the way up Back River to the heading. Apparently in 1940, you could hardly get through in a rowboat.

The first school, a wooden building with only two rooms, was on the corner of Hamilton Avenue and Philadelphia Road. In 1950 it was a fire house and hall.

Rosedale grew steadily as a residential suburb beginning in the 1950s. Three quarters of the housing units existing in 1990 were built between 1854 and 1979.

In 2000, 2.7% of Rosedale residents identified as being of Greek heritage. This was the highest percentage of Greek Americans of any place in Maryland.[6]

There were 7,272 households out of which 30.1% had children under the age of 18 living with them, 54.0% were married couples living together, 14.2% had a female householder with no husband present, and 26.7% were non-families. 21.8% of all households were made up of individuals and 10.3% had someone living alone who was 65 years of age or older. The average household size was 2.64 and the average family size was 3.07. 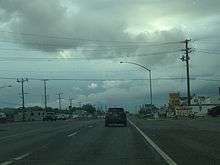 A look down Pulaski Highway in Rosedale one evening.

Some major roads in Rosedale are:

The Maryland Transit Administration provides bus service in the Rosedale area on routes 4, 35, 44, and 55.