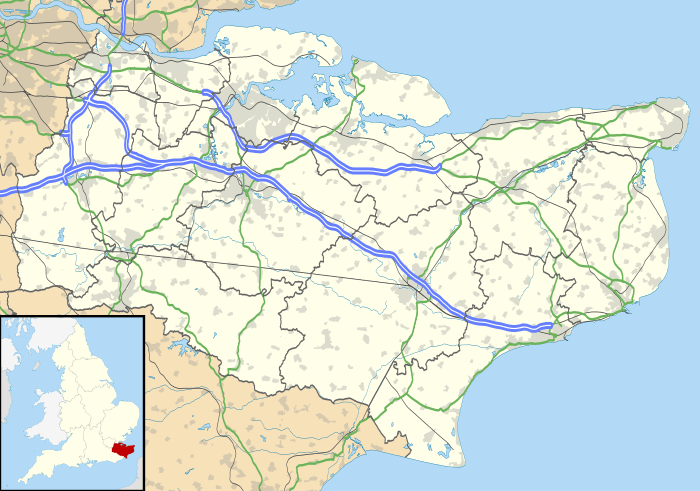 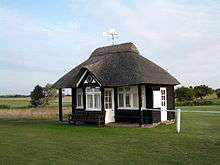 The starters hut at the 1st hole

The Royal St George's Golf Club located in Sandwich, Kent, England is one of the premier golf clubs in the United Kingdom, and one of the courses on The Open Championship rotation. It has hosted 13 Open championships since 1894, when it became the first club outside Scotland to host the championship. Past champions include Darren Clarke, Ben Curtis, Greg Norman, Sandy Lyle, Bill Rogers, Bobby Locke, Reg Whitcombe, Henry Cotton, Walter Hagen (on two different occasions), Harry Vardon (on two different occasions), Jack White and John Henry Taylor. It has also hosted The Amateur Championship on 13 occasions.

The club was founded in 1887 in a setting of wild duneland. Many holes feature blind or partially blind shots, although the unfairness element has been reduced somewhat, after several 20th century modifications. The club's Challenge Trophy dates from 1888 and is one of the oldest trophies in golf; it has been contested annually except for war years. The course also possesses the deepest bunker in championship golf, located on its fourth hole.[2]

The famous British Open Royal St George's golf club has been involved in a research informed study undertaken by Dr Graham Earl since 2011, on behalf of Natural England and Canterbury Christ Church University.

The intensive study undertaken between 2011 - 2015 at Sandwich Bay, incorporated all three links golf courses located at Sandwich Bay, including Royal Cinque Ports golf club and Princes golf club. These courses were involved in a Eco-hydrological study, focusing upon the chemical composition of the groundwater, historical analysis of vegetation composition and management trials looking at site-specific management regime's which encourage native sward development.

Management trials indicated that burning as a management regime promoted an increase in native swards. A combination of the research informed outcomes and enthusiasm for the study by Head Greenkeeper Paul Larsen, has helped to revert in a positive way the SSSI status at Royal St Georges golf club, in an unprecedented three-year period.

This burning management regime provides a fast quick burn, therefore not affecting the rooting zone, (in particular the rare orchids which resides predominantly at Sandwich Bay), but does remove the thatch layer removing generalist competitive plant/grass species. The burning treatment that can be viewed between October - February, was undertaken to reduce the sward thatch and encourage native grey dune plant species, of which has been very successful and the site now hosts one of the largest abundance of orchids in a single site, managed for amenity.

Full publication details of the study can be viewed via the following link: http://create.canterbury.ac.uk/13317/

Royal St George's has hosted The Open Championship on 14 occasions since 1894.