For other uses, see Muirfield (disambiguation). 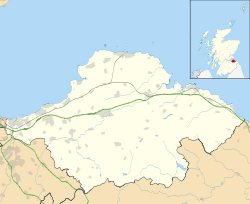 Muirfield is a privately owned links which is the home of The Honourable Company of Edinburgh Golfers. Located in Gullane, East Lothian, Scotland, overlooking the Firth of Forth, Muirfield was formerly one of the golf courses used in rotation for The Open Championship.

Muirfield has hosted The Open Championship sixteen times, most recently in 2013 when Phil Mickelson lifted the trophy. Other past winners at Muirfield include Ernie Els, Nick Faldo (twice), Tom Watson, Lee Trevino, Jack Nicklaus, Gary Player, Henry Cotton, Alf Perry, Walter Hagen, Harry Vardon and Harold Hilton. Muirfield has also hosted The Amateur Championship (ten times), the Ryder Cup in 1973, the 1959 and 1979 Walker Cups, the 1952 and 1984 Curtis Cups, and many other important tournaments.

Muirfield has an unusual layout for a links course. Most links courses run along the coast and then back again leading to two sets of nine holes, the holes in each set facing roughly in the same direction. Muirfield, however, was among the first courses to depart from this arrangement and is arranged as two loops of nine holes, one clockwise, one anticlockwise. This means that, assuming the wind direction remains the same throughout a round, every hole on the course has a different apparent wind direction from the tee. No more than three consecutive holes follow the same direction at any stage.

Jack Nicklaus won three Open Championships, the first at Muirfield in 1966, which completed the first of his three career grand slams. Nicklaus has described Muirfield as "the best golf course in Britain."[2] He later developed a championship golf course and community in Dublin, Ohio, a suburb north of his hometown of Columbus. Opened in 1974, Nicklaus named it Muirfield Village; it has hosted his Memorial Tournament, a top invitational event on the PGA Tour since 1976.

Muirfield has halted two post-war attempts at the grand slam, denying the third major of the year to winners of the first two, the Masters and U.S. Open. Nicklaus was runner-up by a stroke in 1972 to Trevino, and Tiger Woods ran into gale-force winds and rain in the third round in 2002 and shot an 81; he rebounded with a 65 on Sunday to finish at even-par, six strokes out of the playoff in a tie for 28th place.

The Honourable Company of Edinburgh Golfers

The Honourable Company of Edinburgh Golfers, now based at Muirfield, holds the claim of being the oldest verifiable organised golf club in the world, although the game of golf is several centuries older. The club's records date continuously back to 1744, when it produced thirteen "Rules of Golf" for its first competition which was played at Leith Links for the "Silver Club".[3] The first competition was won by John Rattray, who signed the rules and became the first club captain.[4] The club played on the five holes at Leith Links for nearly a century, but overcrowding forced a move in 1836 to Musselburgh Old Course's 9-hole Old Course. Musselburgh, like many prestigious Scottish courses including St Andrews, is a public course, and this course also eventually became too crowded for the liking of the HCEG's members.

In 1891, the club built a new private 18-hole course at Muirfield, taking the Open Championship with them. This situation caused some ill feeling at Musselburgh, which lost the right to hold the Open from that point forward. Old Tom Morris designed the new course, which met with wide approval from the start; it has been modified and updated several times since, in significant ways up to the late 1920s, after which it has remained stable.[5] The first Open held on the new course in 1892 was the first tournament anywhere contested over four rounds, or 72 holes.[6]

Though women can play the course as guests or visitors they are barred from holding membership of the Company. [7][8] A vote was taken on 19 May 2016; a majority of members voted for allowing female members, but the vote fell short of the two-thirds majority required to make changes to membership policy. This result led the organisers of the Open, R&A, to remove Muirfield from the rotation of Open venues.[9]Speaking shortly after the announcement, secretary Stuart McEwen said the outcome was 'a blow to the club, the local community and Scotland'.[10]

On 27 June, it was revealed that due to the public backlash from the vote in May, a fresh membership ballot would be held by the end of 2016.[11]

The Open Championship was first held at Muirfield in 1892 and has hosted 16 times, the last in 2013.

The Senior British Open Championship was first held at Muirfield in 2007.