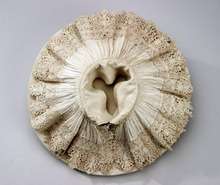 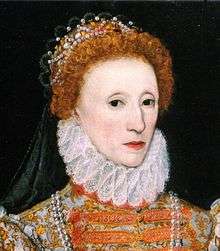 Ruff of c. 1575. Detail from the Darnley Portrait of Elizabeth I.

The ruff, which was worn by men, women and children, evolved from the small fabric ruffle at the drawstring neck of the shirt or chemise. They served as changeable pieces of cloth that could themselves be laundered separately while keeping the wearer's doublet from becoming soiled at the neckline. 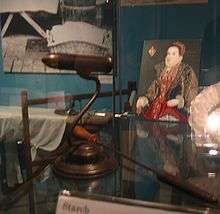 Tally iron, or goffering iron, for ironing lace and making ruff collars. Long rod to the right, curved stand for the rod to the left. From York Castle Museum

"Ten yards is enough for the ruffs of the neck and hand" for a New Year's gift made by her ladies for Queen Elizabeth in 1565,[1] but the discovery of starch allowed ruffs to be made wider without losing their shape. Later ruffs were separate garments that could be washed, starched, and set into elaborate figure-of-eight folds by the use of heated cone-shaped goffering irons. Ruffs were often coloured during starching, vegetable dyes were used to give the ruff a yellow, pink or mauve tint.[2] A pale blue colour could also be obtained via the use of smalt, although Elizabeth I took against this colour and issued a Royal Prerogative:

At their most extreme, ruffs were a foot or more wide; these cartwheel ruffs required a wire frame called a supportasse or underpropper to hold them at the fashionable angle. Ruffs could make it difficult to eat during mealtimes, similar to the cangue.[4] By the end of the sixteenth century, ruffs were falling out of fashion in Western Europe, in favour of wing collars and falling bands. The fashion lingered longer in the Dutch Republic, where ruffs can be seen in portraits well into the seventeenth century, and farther east. It also stayed on as part of the ceremonial dress of city councillors (Senatoren) in North German Hanseatic cities and of Lutheran clergy in those cities and in Denmark, Norway, the Faroe Islands, Iceland and in Greenland.

The ruff was banned in Spain under Philip IV (orchestrated by Gaspar de Guzmán, Count-Duke of Olivares).[5] 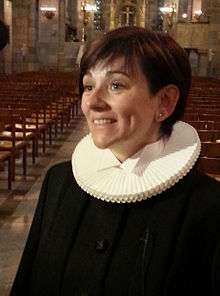 A priest in the Church of Denmark wearing a ruff.

Ruffs remain part of the formal attire of bishops and ministers in the Church of Denmark and are generally worn for services. They were abolished by the Church of Norway in 1980, although some conservative ministers such as Børre Knudsen continued to wear them. Ruffs are optional for trebles in Anglican church choirs.[6] Underground artist Klaus Nomi used a ruff as part of his concert attire toward the end of his life, both as a complement to the renaissance-era music he began focusing on in this time frame and to hide the effects of Kaposi's sarcoma. In the twentieth century, the ruff inspired the name of the Elizabethan collar for animals.