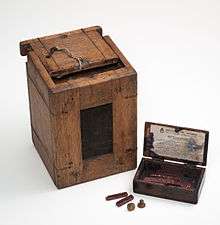 An Argentine ballot box used in the 1916 election.

The Sáenz Peña Law (in Spanish, Ley Sáenz Peña) was Law 8871 of Argentina, sanctioned by the National Congress on 10 February 1912, which established the universal, secret and compulsory male suffrage though the creation of an electoral list (Padrón Electoral). It was approved during the presidency of Roque Sáenz Peña, main supporter of the law.

The right to vote for females was not covered by this law until 1947, during the first presidency of Juan Perón. The "universal" scope of the originality law included only native and naturalized men but not women and working class men who were non-citizen immigrants, a very significant portion of the population at the time. Indeed, in Buenos Aires in 1914, 49% of the population was foreign born.[1] In the entire country, 30% of all residents were foreign born according to the 1914 national census.[2]

Sáenz Peña made his intentions about the voting system public during his first speech before the National Congress, in 1910. Interior Minister Indalecio Gómez proposed a reform that left the compilation of the electoral list in the hands of the War Ministry (males over 18 were recorded when called for conscription), while the Judicial Branch was put in charge of dictating who would organize the elections and who would be allowed to vote. This deprived the Executive Branch of its former ability to write and manipulate the electoral list.

The conservative sectors, which had stayed in power for decades through dubious and fraudulent elections, could not consolidate a political party without popular support. Hipólito Yrigoyen, the candidate of the Radical Civic Union (Unión Cívica Radical, UCR) won the first presidential elections that followed the new law by a considerable advantage, and the UCR became the most powerful political force.

As a consequence of the law, all political parties had to reorganize themselves, revising their regulations, creating electoral platforms, opening local seats and periodically gathering in assemblies.