Immigration to Argentina began in several millennia BC with the arrival of cultures from Asia to the Americas through Beringia, according to the most accepted theories, and were slowly populating the continent. Upon arrival of the Spaniards, the inhabitants of Argentine territory were approximately 300,000 people belonging to many civilizations, cultures and tribes. After the Spanish conquest, an abundant amount of immigrants from all over the world arrived in the country.

The history of immigration to Argentina can be divided into several major stages:

The Spanish migration flows which conquered and colonised the area that is now Argentina were mainly three:

The Spanish conquistadores and settlers were mainly from Biscay, as well from Galicia and Portugal, founding cities and establishing estancias for supplies of agricultural and livestock products. The scale of operations was reduced, mainly focused on the domestic market and the provision of the crown.

Support and control of immigration 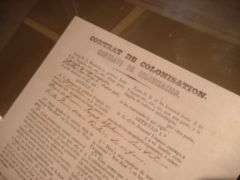 Copy of a colonization contract in the history museum of San José, Entre Ríos

Since its unification as a country, Argentine rulers intended the country to welcome immigration. Article 25 of the 1853 Constitution reads:

The Federal Government will encourage European immigration, and it will not restrict, limit or burden with any taxes the entrance into Argentine territory of foreigners who come with the goal of working the land, improving the industries and teach the sciences and the arts.

The Preamble of the Constitution dictates a number of goals (justice, peace, defense, welfare and liberty) that apply "to all men in the world who wish to dwell on Argentine soil". The Constitution incorporates, along with other influences, the thought of Juan Bautista Alberdi, who expressed his opinion on the matter in succinct terms: "to rule is to populate".

The legal and organizational precedents of today's National Migrations Office (Dirección Nacional de Migraciones) can be found in 1825, when Rivadavia created an Immigration Commission. After the Commission was dissolved, the government of Rosas continued to allow immigration. Urquiza, under whose sponsorship the Constitution was drawn, encouraged the establishment of agricultural colonies in the Littoral (western Mesopotamia and north-eastern Pampas).

The first law dealing with immigration policies was Law 817 of Immigration and Colonization, of 1876. The General Immigration Office was created in 1898, together with the Hotel de Inmigrantes (Immigrants' Hotel), in Buenos Aires.

The liberal rulers of the late 19th century saw immigration as the possibility of bringing people from supposedly more civilized, enlightened countries into a sparsely populated land, thus diminishing the influence of aboriginal elements and turning Argentina into a modern society with a dynamic economy. However, immigrants did not bring only their knowledge and skills.

In 1902, a Law of Residence (Ley de Residencia) was passed, mandating the expulsion of foreigners who "compromise national security or disturb public order", and, in 1910, a Law of Social Defense (Ley de Defensa Social) explicitly named ideologies deemed to have such effects. These laws were a reaction by the ruling elite against imported ideas such as labor unionism, anarchism and other forms of popular organization.

The modern National Migrations Office was created by decree on February 4, 1949, under the Technical Secretariat of the Presidency, in order to deal with the new post-war immigration scenario. New regulations were added to the Office by Law 22439 of 1981 and a decree of 1994, but the current regulations are the Law 25871 of 2004 and the decree 616 of 2010.[6][7] 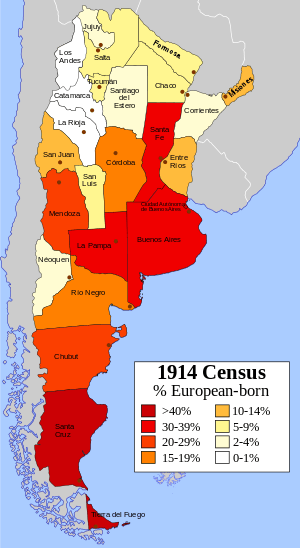 European-born Argentines by provinces and territories (1914 Argentine Census). A large immigration was experienced all over the country (except for the Northwest), which consisted overwhelmingly by Europeans in a 9/10 ratio. However, Neuquén and Corrientes had a small European population but a large South American immigration (particularly the former), mainly from Chile and Brazil, respectively. The Chaco region (North) had a moderate influx from Bolivia and Paraguay as well.

The majority of immigrants, since the 19th century, have come from Europe, mostly from Italy and Spain. Also notable were Jewish immigrants escaping persecution, giving Argentina the highest Jewish population in Latin America, and the 7th in all the world. The total population of Argentina rose from 4 million in 1895 to 7.9 million in 1914, and to 15.8 million in 1947; during this time the country was settled by 1.5 million Spaniards and 1.4 million Italians, as well as Poles, Russians, French (more than 100,000 each), Germans and Austrians (also more than 100,000), Portuguese, Greek, Ukrainians, Croats, Czechs, Irish, British, Dutch, Scandinavians, and people from other European and Middle Eastern countries, prominently Syria and Lebanon. Argentine immigration records also mention immigrants from Australia, South Africa and the United States. These trends made Argentina the country with the second-largest number of immigrants, with 6.6 million, second only to the United States with 27 million.[3][4]

Most immigrants arrived through the port of Buenos Aires and stayed in the capital or within Buenos Aires Province, as it still happens today. In 1895, immigrants accounted for 52% of the population in the Capital, and 31% in the province of Buenos Aires (some provinces of the littoral, such as Santa Fe, had about 40%, and the Patagonian provinces about 50%). In 1914, before World War I caused many European immigrants to return to their homeland in order to join the respective armies, the overall rate of foreign-born population reached its peak, almost 30%.

A significant number of immigrants settled in the countryside in the interior of the country, especially the littoral provinces, creating agricultural colonies. These included many Jews, fleeing pogroms in Europe and sponsored by Maurice de Hirsch's Jewish Colonization Association; they were later termed "Jewish gauchos". The first such Jewish colony was Moïseville (now the village of Moisés Ville). Through most of the 20th century, Argentina held one of the largest Jewish communities (near 500,000) after the US, France, Israel and Russia, and by far the largest in Latin America (see History of the Jews in Argentina). Argentina is home to a large community from the Arab world, made up mostly of immigrants from Syria, Lebanon and Israel. Most are Christians of the Eastern Orthodox and Eastern Catholic (Maronite) Churches, with small Muslim and Jewish minorities. Many have gained prominent status in national business and politics, including former president Carlos Menem, the son of Syrian settlers from the province of La Rioja. (see Arab Argentine).

The Welsh settlement of Argentina, whilst not as large as those from other countries, was nevertheless one of the largest in the planet and had an important cultural influence on the Patagonian Chubut Province. Other nationalities have also settled in particular areas of the country, such as Irish in Formosa and the Mesopotamia region, the Ukrainians in Misiones where they constitute approximately 9% of the population.[8]

Well-known and culturally strong are the German-speaking communities such as those of German-descendants themselves (both those from Germany itself, and those ethnic Germans from other parts of Europe, such as Volga Germans), Austrian, and Swiss ones. Strong German-descendant populations can be found in the Mesopotamia region (especially Entre Ríos and Misiones provinces), many neighborhoods in Buenos Aires city (such as Belgrano or Palermo), the Buenos Aires Province itself (strong German settlement in Coronel Suárez, Tornquist and other areas), Córdoba (the Oktoberfest celebration in Villa General Belgrano is specially famous) and all along the Patagonian region, including important cities such as San Carlos de Bariloche (an important tourist spot near the Andes mountain chain, which was especially influenced by German settlements).

The South African Boers Patagonia houses a unique community of South African Boers who settled there after their bitter war against the United Kingdom, which ended in 1902. Between 1903 and 1909, up to 800 Boer families trekked by ship to this lonely spot on Argentina's east coast, about 1500km north of Tierra del Fuego. There are an estimated 100-120 Boer families still living on the land assigned to them by General Julio Roca. They are mainly an agricultural community.

They had suffered badly in the 1899-1902 South African war. Some had lost family members in Kitchener's infamous concentration camps; others had their farmhouses destroyed by British troops.

Most of the Boer men who shipped out to settle in South America, taking their wives and children with them, had fought in said war against Britain, the nation that had seized their former independent republics of Transvaal and Orange Free State. The Boers left because they had no desire to live under their conqueror's thumb.[9][10][11][12]

Other nationalities, such as Spaniards, although they have specific localities (such as the centre of Buenos Aires), they are more uniformly present all around the country and form the general background of Argentine population today. A statue honoring the immigrants, in Rosario

Post-independence politicians tried to steer Argentina consistently away from identification with monarchical Spain, perceived as backward and ultraconservative, towards relatively progressive national models like those of France or the United States. Millions of poor peasants from Galicia arriving in Argentina not only did little to alter this position but also immigrated to Argentina because of it, steering clear of the United States and Britain.

Immigrant communities have given Buenos Aires some of its most famous landmarks, such as the Torre de los Ingleses (Tower of the English) or the Monumento de los Españoles (Monument of the Spaniards). Ukrainians, Armenians, Swiss, and many others built monuments and churches at popular spots throughout the capital.

Argentina celebrates Immigrant's Day on September 4 since 1949, by a decree of the Executive Branch. The National Immigrant's Festival is celebrated in Oberá, Misiones, during the first fortnight of September, since 1980. There are other celebrations of ethnic diversity throughout the country, such as the National Meeting and Festival of the Communities in Rosario (typically at the beginning of November). Many cities and towns in Argentina also feature monuments and memorials dedicated to immigration. There are also Immigrant's Festivals (or Collectivities Festivals) throughout the country, for example: Córdoba, Bariloche, Berisso, Esperanza, Venado Tuerto, and Comodoro Rivadavia have their own Immigrant's festivals. These festivals tend to be local, and they are not advertised or promoted nationally like the festivals in Rosario and Oberá.

Besides substantial immigration from neighboring countries, during the middle and late 1990s Argentina received significant numbers of people from Asian countries such as Korea (both North and South), China and Vietnam, which joined the previously existing Sino-Japanese communities in Buenos Aires. Despite the economic and financial crisis Argentina suffered at the start of the 21st century, people from all over the world continued arriving to the country, because of their immigration-friendly policy and other reasons.

In April 2006, the national government started the Patria Grande plan to regularize the migratory situation of undocumented immigrants. The plan attempts to ease the bureaucratic process of getting documentation and residence papers, and is aimed at citizens of Mercosur countries and its associated states (Bolivia, Brazil, Chile, Colombia, Ecuador, Paraguay, Peru, Uruguay and Venezuela). The plan came after a scandal and a wave of indignation caused by fire in a Buenos Aires sweatshop, which revealed the widespread utilization of undocumented Bolivian immigrants as cheap labor force in inhumane conditions, under a regime of virtual debt slavery.

Country of birth of Argentine residents