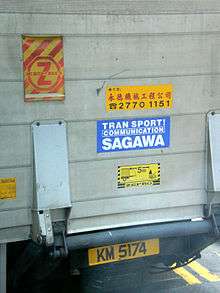 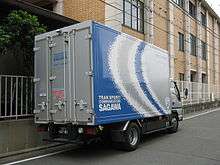 Sagawa Express Co., Ltd. (佐川急便株式会社, Sagawa Kyūbin Kabushiki-gaisha) is a major transportation company in Japan. Its headquarters are in Minami-ku, Kyoto. It competes with Yamato Transport, Nippon Express, and other major logistics companies. Its total sales for the year ending March 2005 were ¥728,000,000,000.

The company was founded by Kiyoshi Sagawa. It began operation on March 22, 1957, and was registered as a company on November 24, 1965. On March 21, 2006, it established SG Holdings and transferred its stock to SG, becoming a subsidiary of the holding company.

Galaxy Airlines of Japan is a member of the group of companies.

From 1992 the company was the center of a series of corruption and yakuza-link allegations[1] that helped bring down the ruling LDP, and then the reformist Prime Minister Morihiro Hosokawa.[2]

This article is issued from Wikipedia - version of the 10/1/2013. The text is available under the Creative Commons Attribution/Share Alike but additional terms may apply for the media files.