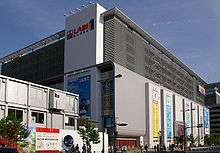 Yamada-Denki Co., Ltd. (株式会社ヤマダ電機, Kabushiki-gaisha Yamada Denki) is one of the largest consumer electronics retailer chains in Japan. Some of its stores also sell other products, such as books.

The company was founded in 1973 as a privately owned store. Yamada Denki Co., Ltd. was established in 1983. The current corporation was created on May 21, 1987, by a merger with the dormant company Nihon Densen Kōgyō Kabushiki-gaisha (日本電線工業株式会社) "Japan Electrical Wiring Industries", founded in 1978, via a change in the face value of the stock, and a change in the company name (to Kabushiki-gaisha Yamada Denki). Yamada Denki is listed in the first division of the Tokyo Stock Exchange, and the location of its head office is 4-40-11, Hiyoshi-chō, Maebashi, Gunma Prefecture, Japan. The head office is scheduled to move to Takasaki, Gunma in 2007. In February 2005, the company achieved sales figures of 1 trillion yen, making it the first specialist retailer in Japan to do so.

At the end of 2004, the company had 223 directly run stores across Japan, and 33 stores owned by subsidiaries, a total of 256 stores. It aims to expand further by branching out into small-scale retail and retail in the areas close to train stations. With the opening of the Tecc Land Tokushima Aizumi store in Aizumi, Tokushima Prefecture, on July 29, 2005, it became the first consumer electronics retailer to have stores in every prefecture in Japan.

There is a strong rivalry between Yamada Denki and Kojima, another major retailer of consumer electronics, with its head office in the neighboring prefecture of Tochigi, in Utsunomiya. Sales competition between the two has often caused sparks to fly, and sometimes disputes have ended up in court. There have been fierce battles for shop sales and store locations with other companies in the same industry, and in every store location "consumer electronics wars" named after the local area have broken out. In Shizuoka, in June 2005, Yamada Denki made news by opening a store next to the Kojima store on National Route 1, Suruga-ku, which was of the same scale. There are several other stores next to Kojima stores. In Kumagaya, Saitama Prefecture, despite having a store at some distance from the Kojima store, Yamada Denki opened a new store in the building vacated by Maruetsu, right in front of Kojima's nose, while keeping their existing store open. Kojima then opened a "New Kumagaya store", more than twice the size, renovating it using the scrap-and-build method. Since the 1990s, competition between the stores has been so tight that other rivals are unable to come close. At one point during the time when it was called Gigas Kansai, Gigas opened a store, but was quickly forced to withdraw. In Kōriyama, Fukushima, Kojima and Best Denki used to have stores at the same crossroads, but Best Denki withdrew, and Kojima reopened its New Murayama store, which had been closed, increasing its area several times using the scrap-and-build method. The competition in the consumer electronics field is still continuing at present.

Before Yamada Denki brought in its point system, it set up an experimental store to test the system, using the name "Digital 21" rather than "Tecc Land", in Adachi-ku and Okayama Prefecture. In Okayama, a Tecc Land store was closed and renovated to turn it into the Digital 21 Okayama store.

Groups including Shoten Kumiai (日本書店商業組合連合会, Nihon Shoten Shōgyō Kumiai Rengōkai), a trade union composed of booksellers from across Japan, have expressed the opinion that issuing points for books, and selling books using points, is an infringement of the resale price maintenance system, and requested that the redemption rate of the points (currently 3%) be lowered. When points were introduced, the rate for books was 5%, but it was later lowered to 3%.

In August 2005, the company bought land in front of the east exit of Takasaki Station through Shimizu Corporation. This is scheduled to be completed in 2007, becoming the location of a large city store, and doubling as the company headquarters. There was initially a plan to build the store in the Minato Mirai 21 area of Yokohama, but the plan was changed, apparently because the Yokohama city government expressed concerns about traffic congestion in the area.

In November 2005, Yamada Denki, together with the Kagawa Prefecture supermarket Marunaka, and the electrical goods retailer "Dynamite", also from Kagawa, founded "Chūgoku / Shikoku Tecc Land". Dynamite was transformed into a franchise, and its major stores were changed to Tecc Land stores. The result, in practice, was the acquisition of Dynamite.

As of 2006, the company uses the actor Masanobu Takashima and the professional soccer player Shunsuke Nakamura for publicity, and the two appear in television commercials.

This song ends in a coda, over which (as of December 2006) a female singer yells "Yamada.. DENKI!". This ending coda is played at seemingly random intervals within the store, often interrupting the background music - much to the surprise of patrons not accustomed to it.

Companies in the group

Much of this article was translated from the equivalent article in the Japanese Wikipedia, as retrieved on November 26, 2006.

This article is issued from Wikipedia - version of the 10/10/2015. The text is available under the Creative Commons Attribution/Share Alike but additional terms may apply for the media files.