In this Japanese name, the family name is Hosokawa.

Morihiro Hosokawa (細川 護煕, Hosokawa Morihiro, born 14 January 1938) is a Japanese politician who was the 79th Prime Minister of Japan from 9 August 1993 to 28 April 1994. His coalition was the first non-Liberal Democratic Party (LDP) government since 1955. He ran as a candidate for governor of Tokyo in the February 2014 gubernatorial election as an independent supported by the Democratic Party of Japan.[1] He is since 2005, the 18th Head of the Kumamoto-Hosokawa clan, one of the noble families in Japan.

Morihiro Hosokawa was born in Tokyo as the eldest grandson of Moritatsu, 3rd Marquess Hosokawa, and the 16th Head of the Hosokawa clan. His maternal grandfather is the pre-war prime minister Prince Fumimaro Konoe.[2]He is also a descendant of Christian heroine Gracia Hosokawa.[3]

Hosokawa received his LL.B. degree from Sophia University in 1961. After working for the newspaper Asahi Shimbun as journalist for five years, he made an unsuccessful run in the 1969 general election. He was elected to the House of Councillors of Japan as an LDP representative of Kumamoto Prefecture in 1971, with his campaign funded by party boss Kakuei Tanaka.[2]

After serving two terms in the National Diet, he left in 1983 to become the governor of Kumamoto, where he served until 1991. During his term as governor, he complained about interference in local affairs from the central government in Tokyo. In May 1992, an ongoing campaign contribution scandal inspired him to form the reformist Japan New Party (JNP), which won four seats (one of which Hosokawa assumed) in the 1992 House of Councillors election.[2]

In the July 1993 general election, in a change very few had foreseen even a year earlier, the LDP lost its majority in the Diet for the first time in thirty-eight years, winning only 223 out of 511 seats in the House of Representatives. The previous LDP government of Kiichi Miyazawa was replaced by an eight-party coalition government which promised a series of social, political, and economic reforms. Excluding the JCP, the coalition was backed by all of the former opposition parties, which included the newly formed JNP, the Japan Socialist Party, the Japan Renewal Party (Shinseito), Komeito, the Democratic Socialist Party, the Socialist Democratic Federation, the RENGO and the New Party Sakigake, who together controlled 243 seats in the House of Representatives. Hosokawa, one of the major voices in forming the coalition, was chosen as the new Prime Minister.

Walter Mondale, then the US ambassador to Japan, characterized Hosokawa as having a "Kennedy-esque" ability to focus on ideals; nonetheless Hosokawa's coalition had no common ideas other than their opposition to the LDP, which undermined Hosokawa throughout his term as prime minister. He was also at odds with Japan's bureaucracy, which he sought to reform after decades of bureaucratic entrenchment under the LDP.[4]

Hosokawa made several unprecedented moves toward atonement with Japan's Asian neighbors during his term as prime minister. In his first news conference in office, he made an unprecedented statement acknowledging that Japan waged a war of aggression in World War II. He later said: "You can obviously define 'aggression' in any number of ways, depending on context. But if you have any common sense, you just cannot say in good conscience that Japan was not the aggressor when Japan did in fact cause tremendous anguish and loss of life in China, Korea and Southeast Asian nations in order to protect its own interests. I knew my opinion was going to invite heated controversy."[5]

On 6 November 1993, he visited South Korea, where he had a summit with President Kim Young-sam in Gyeongju and again offered a clear apology to the Korean people for Japan's actions in the war, statements which were widely applauded in Korea. Hosokawa viewed the Japanese annexation of Korea as wrong and rejected the common view in Japan that it was with Korea's consent and was beneficial to Korea.[5] On 19 March 1994, he visited China, and the two governments signed an agreement of cooperation in environmental protection.

In May 1994, right-wing extremist Masakatsu Nozoe fired a gunshot into the ceiling of a Tokyo hotel where Hosokawa was giving a speech, in apparent protest of Hosokawa's statements.[6]

Hosokawa's acts toward China and Korea inspired Russian president Boris Yeltsin to apologize to Hosokawa for the Soviet detention of Japanese prisoners of war in Siberia. Hosokawa later speculated that if both men had remained in office longer Russian-Japanese relations would have improved significantly.[5] Hosokawa also had a good personal relationship with Bill Clinton, but trade disputes between Japan and the United States dominated US-Japan relations during Hosokawa's tenure.[4]

The Hosokawa government pushed for changes to Japanese election laws intended to fight political corruption, including elimination of corporate political donations to individual candidates and a redrawing of the electoral system, both intended to prevent the LDP from continuing to employ its past electoral practices. After an extended legislative fight, the LDP was able to force several concessions to maintain their advantage, retaining corporate political donations with a cap, while pushing back on some more radical changes to the electoral map and ensuring that most candidates would keep essentially the same seats in the next election.[7] These compromises had a negative impact on the public approval of the Hosokawa coalition.[8]

A law of December 1993 amending the Basic Law on measures for physically and mentally disabled persons of 1970 aimed to promote the independence of disabled people and their participation in activities in any field such as culture, the economy, and community affairs. Amendments made to regulations under the Industrial Safety and Health Law of 1972 on the 30th of March 1994 included accidents involving the collapsing of cranes and breaking of wires that needed to be reported to the authorities.[9] On the 1st of April 1994, a 40-hour workweek was introduced.[10]

Hosokawa also enacted cuts in income and resident taxes, intended to help Japan out of the recession that had followed the Japanese asset price bubble of the late 1980s and early 1990s. After pressure from the finance ministry, the government compensated for these cuts by announcing an increase in the consumption tax from 3% to 7% effective from 1997. The move was controversial within the cabinet, as Ichiro Ozawa favored a 10% rate while the Japan Socialist Party would not agree to an increase. Hosokawa announced the increase but retracted the announcement the next day, leaving the tax at 3%. The government's response to the issue weakened its hold on power and was said to hasten its demise. The tax was eventually increased to 5% in 1997 by LDP Prime Minister Ryutaro Hashimoto.[11][12][13]

Hosokawa was forced to resign in April 1994 after it came to light that he had accepted a 100 million yen loan from a trucking company previously accused of bribery and links to organized crime. Amid allegations of bribery, Hosokawa argued that the money was a loan and produced a receipt to show that he had paid it back; LDP members passed around a copy remarking that it looked like a sloppy fake. Although Hosokawa still had high public approval at the time, opinion was growing that he could not meet the expectations set at the start of his term.[14]

Hosokawa's resignation was abrupt and led to a number of frenzied meetings aimed at saving the coalition, which was torn between the rival camps of Ichiro Ozawa and Masayoshi Takemura.[15] After his resignation, the coalition was taken over by the Shinseito president Tsutomu Hata.

The Hosokawa cabinet was a product of his multi-party coalition but was dominated by individuals viewed as conservatives. Its key ministers were members of the Shinseito party led by Ichiro Ozawa. Hosokawa's own Japan New Party had no other representatives in the cabinet.[16]

Hosokawa joined the New Frontier Party in 1994, but following further disputes with Ichiro Ozawa, left in 1997 with four other legislators who formed the short-lived From Five party. In 1998, From Five merged into the Good Governance Party, which itself merged into the Democratic Party of Japan (DPJ) later that year.

After the LDP returned to power in 1994, Hosokawa teamed up with Junichiro Koizumi of the LDP and Shusei Tanaka of New Party Sakigake in a strategic dialogue across party lines regarding Japan becoming a permanent member of the United Nations Security Council. Although this idea was not popular within the LDP and never came to fruition, Hosokawa and Koizumi maintained a close working relationship in subsequent years. Hosokawa tacitly served as Koizumi's personal envoy to China at times of strained Sino-Japanese relations during Koizumi's term as prime minister from 2001 to 2006.[17]

Hosokawa retired from politics in 1998 at the age of 60. In his retirement, he took up pottery, studying intensively for 18 months under pottery master Shiro Tsujimura.[18] Hosokawa's pottery has been exhibited in Japan and Europe.[19] He uses his pottery for tea ceremonies at a tea house originally constructed for a visit by Jacques Chirac, which was cancelled due to the outbreak of the Iraq War.[20] He is also a special consultant to The Japan Times. Upon his father's death in 2005, Hosokawa succeeded him as the head of the Hosokawa family. 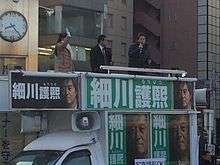 In 2014, at the age of 75, Hosokawa was approached by the DPJ to run in the Tokyo gubernatorial election. Although Hosokawa initially turned down their request, former Prime Minister Junichiro Koizumi encouraged him to run for the primary purpose of gathering public opposition to Prime Minister Shinzo Abe's pro-nuclear policies, and Hosokawa again considered running for the office. This was initially perceived as a blow to Yoichi Masuzoe, the LDP-supported candidate who was also supported by elements within the DPJ and who had previously been considered the lone front-runner in the race;[21] the race between Masuzoe and Hosokawa became widely dubbed as a "proxy contest" between Abe and Koizumi.[22]

Hosokawa announced his candidacy alongside Koizumi on January 14.[23] His campaign was supported by several key members of his 1993-94 coalition: Banri Kaieda and Ichiro Ozawa, who had since become the heads of the Democratic Party of Japan and People's Life Party respectively, threw their support behind Hosokawa, while Shusei Tanaka and Yoriko Madoka were enlisted as his policy advisors.[24]

During his campaign, Hosokawa criticized the Abe government's nuclear policy, stating that "Tokyo is shoving nuclear power plants and nuclear waste to other regions, while enjoying the convenience (of electricity) as a big consumer." He also criticized Abe's foreign policy in the run-up to the 2020 Summer Olympics in Tokyo, questioning "whether pugnacious diplomacy will help the festival of peace to be held smoothly."[25]

Hosokawa failed to gain momentum and trailed behind Masuzoe in the polls through the final week of the campaign, with only a 30%-40% support rating within the DPJ and PLP and particularly low support among women.[26] Masuzoe was declared the winner in exit polls shortly after voting ended on February 9, but Hosokawa vowed to continue anti-nuclear advocacy.[27]

Hosokawa lives in Yugawara, Kanagawa.[20] His wife, Kayoko Hosokawa, served as honorary chair of the Special Olympics Nippon Foundation and headed NPOs devoted to providing vaccines to children in developing nations and helping the intellectually disabled.[28]