A member of one of the richest senatorial families which claimed descent from Agamemnon,[4] Paula was the daughter of Blesilla and Rogatus, from the great clan of the Furii Camilli.[5] In her mid teens, Paula was married to the nobleman Toxotius, with whom she had four daughters, Blaesilla, Paulina, Eustochium, and Rufina. She also had a boy, also named Toxotius. Information about Paula's early life is recorded by Saint Jerome. In his Letter 108, he states that she had led a luxurious life and held a great status. She dressed in silks, and had been carried about the city by her eunuch slaves.

At the age of 32, Paula was widowed. She continued to dedicate herself to her family, but became more interested in religion as time went on.

Through the influence of Saint Marcella and her group, Paula became an enthusiastic member of this semi-monastic group of women. In 382, she met Saint Jerome, who had come to Rome with Saint Epiphanius and Bishop Paulinus of Antioch. Born in Dalmatia, Jerome had studied in Rome as a youth and had traveled to Germany and Aquileia, and for some years had lived in the East as an ascetic and scholar.

While on pilgrimage to the Holy Land and Egypt, she settled in Bethlehem and established a monastery for men and a convent for women.[6]

Paula married her daughter, Paulina (d. 395), to the senator Saint Pammachius; Blesilla soon became a widow and died in 384. Of her two other daughters, Rufina died in 386, and Eustochium accompanied her mother to the Orient where she died in 419. Her son, Toxotius, at first not a Christian, but baptized in 385, married in 389 Laeta, daughter of the pagan priest Albinus. Of this marriage was born Paula the Younger, who in 404 rejoined Eustochium in the Holy Land and in 420 closed the eyes of St. Jerome. These are the names which recur frequently in the letters of St. Jerome, where they are inseparable from that of Paula. It has been argued that Saint Eustochius of Tours was the brother of Paula the Younger and the son of Toxotius.[5] 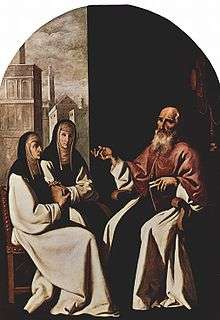 Saint Jerome with Saint Paula and Saint Eustochium (painting of Francisco de Zurbarán at National Gallery of Art in Washington).

Jerome's enemies found that his denunciations of clerical indulgence and advocacy of self-denial were odd when they considered his close relationship with Paula.[7] An amorous relationship between Jerome and Paula was suggested as having occurred.[8]

Paula helped Jerome in his translation of the Bible from Hebrew and Greek into Latin. The work was done at her suggestion, and she provided the reference works necessary for the undertaking. Being versed in Hebrew, she edited Jerome's manuscripts. She and her daughter Eustochium copied the work for circulation.[9]

An anecdote told of Jerome, of twelfth-century origin, tells that Roman clergy hostile to Jerome planned to have him expelled from the city by planting a woman's robe next to his bed. When Jerome awoke in the middle of the night to attend the service of matins, he absentmindedly put on the female robes. He was thus accused of having had a woman in his bed. This story acknowledges, while at the same time discrediting as a malicious slander, Jerome's relationship with women, such the kind he is presumed to have had with Paula.[10]

Chaucer played upon the relationship between Jerome and Paula when he writes the Wife of Bath's Prologue. Chaucer has the Wife visit the same pilgrimage sites as did Paula, and has her constantly cite, not classical authors, but Jerome.[4] Many of her comments are counter-arguments to those put forth by St. Jerome, mainly in his work Against Jovinianus.

Palladius, a contemporary of Jerome, believed that Paula was hindered by Jerome: "For though she was able to surpass all, having great abilities, he hindered her by his jealousy, having induced her to serve his own plan."[11]

When Jerome died in late 419 or early 420, he was buried beneath the north aisle of the Church of the Nativity, near the graves of Paula and Eustochium.[12]