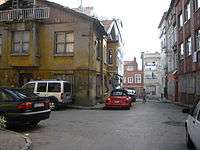 A street in Samatya

Samatya (Greek: Ψαμάθεια, pr. Psamatheia; Armenian: Սամաթիա) is a neighborhood of the Fatih district of Istanbul. It is located along the Marmara Sea, and borders to the west on the neighborhood of Yedikule (the "Castle of the Seven Towers").

The name originates from the Greek word psamathion (Ψαμάθιον), meaning "sandy", because of the great quantity of sand found in the neighborhood.[1]

About 383 AD, the first monastic institution was established in Constantinople, at Psamatheia, at that time still outside the walled city.[2] 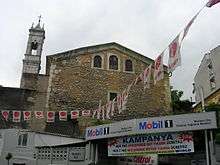 The church of Saint Menas

Up to recent times, Samatya was mostly inhabited by Armenians, who were settled here in 1458 by Sultan Mehmet II,[3] and who own there the church of Surp Kevork, also called Sulu Manastiri (Water's monastery) – previously an Eastern Orthodox church which dates back to before the Ottoman conquest,[3] and by Greeks, who have the churches of Hristos Analipsis and Haghios Menas.[4]

The neighborhood was destroyed in 1782 by one of the largest fires of Istanbul ever recorded.[3]

In Samatya there is also an important public hospital, the İstanbul Eğitim ve Araştırma Hastanesi.

Samatya has a station (named "Kocamustafapaşa") on the suburban railway line Sirkeci-Halkalı.

One of the most picturesque fish markets of Istanbul is placed in the quarter, just opposite the train station.

Samatya is also a favorite place for Turkish directors. One of the most famous Turkish TV shows, Ikinci Bahar ("Second Spring"), as well as Nuri Bilge Ceylan's Three Monkeys, were filmed in Samatya.