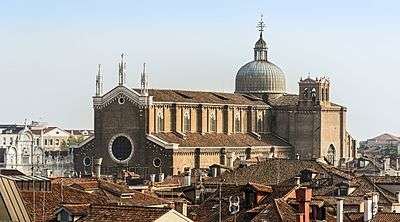 Interior of the church. 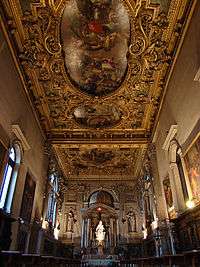 Chapel of the Rosary.

The Basilica di San Giovanni e Paolo, known in Venetian as San Zanipolo, is a church in the Castello sestiere of Venice, Italy.

One of the largest churches in the city, it has the status of a minor basilica. After the 15th century the funeral services of all of Venice's doges were held here, and twenty-five doges are buried in the church.

The huge brick edifice was designed in the Italian Gothic style, and completed in the 1430s. It is the principal Dominican church of Venice, and as such was built to hold large congregations. It is dedicated to John and Paul, not the Biblical Apostles of the same names, but two obscure martyrs of the Early Christian church in Rome, whose names were recorded in the 3rd century but whose legend is of a later date.

In 1246, Doge Jacopo Tiepolo donated some swampland to the Dominicans after dreaming of a flock of white doves flying over it. The first church was demolished in 1333, when the current church was begun. It was not completed until 1430.

The vast interior contains many funerary monuments and paintings, as well as the Madonna della Pace, a miraculous Byzantine statue situated in its own chapel in the south aisle, and a foot of Saint Catherine of Siena, the church's chief relic.

San Giovanni e Paolo is a parish church of the Vicariate of San Marco-Castello. Other churches of the parish are San Lazzaro dei Mendicanti, the Ospedaletto and the Beata Vergine Addolorata.

The Renaissance Equestrian Statue of Bartolomeo Colleoni (1483), by Andrea del Verrocchio, is located next to the church.

The belltower has 3 bells in D major.

The Capella del Rosario (Chapel of the Rosary), built in 1582 to commemorate the victory of Lepanto, contained paintings by Tintoretto, Palma the Younger, Titian and Giovanni Bellini, among others, but they were destroyed in a fire in 1867 attributed to anti-Catholic arsonists. 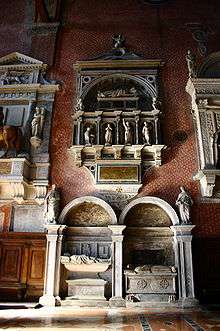 Medieval and Renaissance wall tombs in Santi Giovanni e Paolo, Venice, including an equestrian statue at the left.

The Basilica on the campo San Giovanni e Paolo.

After the 15th century the funeral services of all of Venice's doges were held in San Giovanni e Paolo. Twenty-five doges are buried in the church, including:

Other people buried in the church include: