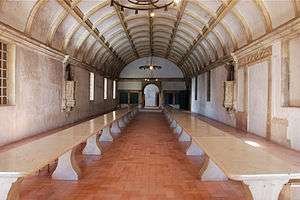 The refectory of the Convent of Christ, Tomar, Portugal.

A refectory (also frater, frater house, fratery) is a dining room, especially in monasteries, boarding schools, and academic institutions. One of the places the term is most often used today is in graduate seminaries. It derives from the Latin reficere "to remake or restore," via Late Latin refectorium, which means "a place one goes to be restored" (cf. "restaurant"). 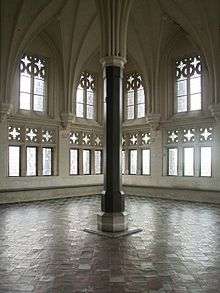 Communal meals are the times when all monks of an institution are together. Diet and eating habits differ somewhat by monastic order, and more widely by schedule. The Benedictine rule is illustrative.

The Rule of St Benedict orders two meals. Dinner is provided for year-round; supper is also served from late spring to early fall, except for Wednesdays and Fridays. The diet originally consisted of simple fare: two dishes, with fruit as a third course if available. The food was simple, with the meat of mammals forbidden to all but the sick. Moderation in all aspects of diet is the spirit of Benedict's law. Meals are eaten in silence, facilitated sometimes by hand signals. A single monk might read from the Scriptures or writings of the saints aloud during the meals.

Refectories vary in size and dimension, based primarily on wealth and size of the monastery, as well as when the room was built. They share certain design features. Monks eat at long benches; important officials sit at raised benches at one end of the hall. A lavabo, or large basin for hand-washing usually stands outside the refectory.

Tradition also fixes other factors. In England, the refectory is generally built on an undercroft (perhaps in an allusion to the upper room where the Last Supper reportedly took place) on the side of the cloister opposite the church. Benedictine models are traditionally generally laid out on an east-west axis, while Cistercian models lay north-south.

Norman refectories could be as large as 160 feet (49 m) long by 35 feet (11 m) wide (as is that in the abbey at Norwich). Even relatively early refectories might have windows, but these became larger and more elaborate in the high medieval period. The refectory at Cluny Abbey was lit through thirty-six large glazed windows. The twelfth-century abbey at Mont Saint-Michel had six windows, five feet wide by twenty feet high. 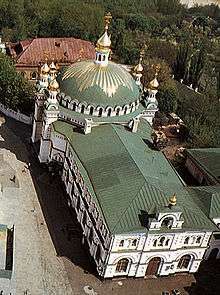 In Eastern Orthodox monasteries, the Trapeza (Greek: τράπεζα, refectory) is considered a sacred place, and even in some cases is constructed as a full church with Altar and Iconostasis. Some services are intended to be performed specifically in the Trapeza. There is always at least one Icon with a lampada (oil lamp) kept burning in front of it. The service of the Lifting of the Panagia is performed at the end of meals. During Bright Week, this service is replaced with the Lifting of the Artos. In some monasteries, the Ceremony of Forgiveness at the beginning of Great Lent is performed in the Trapeza. All food served in the Trapeza should be blessed, and for that purpose, holy water is often kept in the kitchen.

As well as continued use of the historic monastic meaning, the word refectory is often used in a modern context to refer to a café or cafeteria that is open to the public—including non-worshipers such as tourists—attached to a cathedral or abbey. This usage is particularly prevalent in Church of England buildings, which use the takings to supplement their income.[1]

Many universities in the UK also call their student cafeteria or dining facilities the refectory. The term is rare at American colleges, although Brown University calls its main dining hall the Sharpe Refectory (nicknamed the "Ratty").[2]