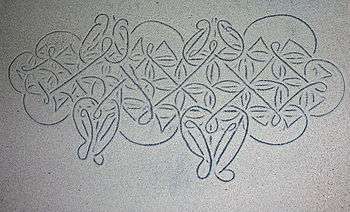 An example of sand drawing in Vanuatu (August 2007)

Sand drawing (or sandroing in Bislama)[1][2] is a ni-Vanuatu artistic and ritual tradition and practice, recognised by UNESCO as a Masterpiece of the Oral and Intangible Heritage of Humanity.[3][4]

"Sand drawing" is produced in sand, volcanic ash or clay. It consists of "a continuous meandering line on an imagined grid to produce a graceful, often symmetrical, composition of geometric patterns". The artist's implement is a single finger.[3]

UNESCO describes sand drawing as a

"rich and dynamic graphic tradition [which] has developed as a means of communication among the members of some 80 different language groups inhabiting the central and northern islands of Vanuatu. The drawings also function as mnemonic devices to record and transmit rituals, mythological lore and a wealth of oral information about local histories, cosmologies, kinship systems, song cycles, farming techniques, architectural and craft design, and choreographic patterns. Most sand drawings possess several functions and layers of meaning: they can be “read” as artistic works, repositories of information, illustration for stories, signatures, or simply messages and objects of contemplation."[3]

The Vanuatu Cultural Centre has noted that sand drawing's "content and deep sense is tending to disappear. Nowadays, only few practitioners still master sand drawing and its associated knowledge. The practice has tended to become focused on the graphic aspect, for advertising or tourism, to the detriment of its original meaning and function". Consequently, a National Action Plan for the Safeguarding of Sand Drawing has been initiated by the Centre, together with the Save Sand Drawings Action Committee; the programme is sponsored by UNESCO. The project notably led to a National Sand Drawing Festival, as from 2004.[4]