This article is about the South Indian style of painting using rice flour. For the variety of rice, see List of rice varieties. 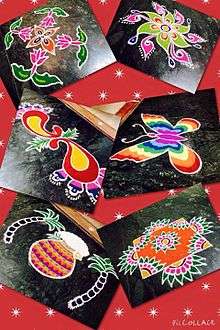 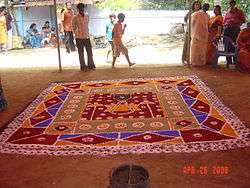 Kolam (Tamil-கோலம்) is a form of drawing that is drawn by using rice flour/chalk/chalk powder/white rock powder often using naturally/synthetically colored powders in Tamil Nadu, Karnataka, Andhra Pradhesh, Kerala and some parts of Goa, Maharashtra, Indonesia, Malaysia, Thailand and a few other Asian countries. A Kolam is a geometrical line drawing composed of curved loops, drawn around a grid pattern of dots. In South India, it is widely practised by female Hindu family members in front of their houses.[1] Kolams are regionally known by different names in India, Raangolee in Maharashtra, Aripan in Mithila , Hase and Raongoli in Kannada in Karnataka, Muggulu in Andhra Pradhesh, Golam in Kerala etc.,[2] More complex Kolams are drawn and colors are often added during holiday occasions and special events. 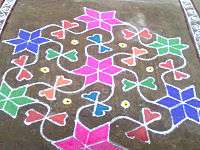 Kolam outside a house in Tamil Nadu 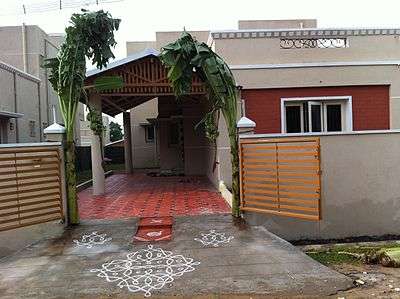 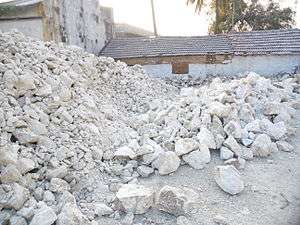 White stones used to make one type of Kolam flour

Kolams are thought to bring prosperity to homes. Every morning in Tamil Nadu, millions of women draw kolams on the ground with white rice flour. Through the day, the drawings get walked on, washed out in the rain, or blown around in the wind; new ones are made the next day. Every morning before sunrise, the floor of the owners house, or where ever the Kolam may be, is cleaned with water and the muddy floor swept well to create an even surface. The kolams are generally drawn while the surface is still damp so the design will hold better. Even powdered white stone (வெங்கசங்கள் பொடி / மொக்குமாவு) can be used for creating Kolam. Occasionally, Cow Dung is also used to wax the floors. In some cultures, cow dung is believed to have antiseptic properties and hence provides a literal threshold of protection for the home. It also provides contrast with the white powder.[3]

Decoration is not the main purpose of a Kolam. In olden days, kolams were drawn in coarse rice flour, so the ants would not have to walk too far or too long for a meal. The rice powder also invited birds and other small creatures to eat it, thus welcoming other beings into one's home and everyday life: a daily tribute to harmonious co-existence. It is a sign of invitation to welcome all into the home, not the least of whom is Lakshmi, the Goddess of prosperity and wealth. The patterns range between geometric and mathematical line drawings around a matrix of dots to free form art work and closed shapes. Folklore has evolved to mandate that the lines must be completed so as to symbolically prevent evil spirits from entering the inside of the shapes, and thus are they prevented from entering the inside of the home. 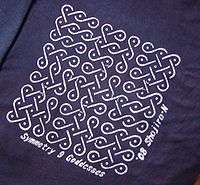 3x3 symmetry 9 goddesses swastika Kolam with a single cycle by Nagata S, each of which corresponds to one of the nine Devi (Goddess) of the Vedic system

It used to be a matter of pride to be able to draw large complicated patterns without lifting the hand off the floor or standing up in between. The month of Margazhi was eagerly awaited by young women, who would then showcase their skills by covering the entire width of the road with one big kolam.[4]

In the kolam patterns, many designs are derived from magical motifs and abstract designs blended with philosophic and religious motifs which have been mingled together.[5] Motifs may include fish, birds, and other animal images to symbolize the unity of man and beast. Also used are designs for the sun, moon and other zodiac symbols.[6]

The ritual kolam patterns created for special occasions such as weddings often stretch all the way down the street. Many of these created patterns have been passed on generation to generation, from mothers to daughters.

Seasonal messages like welcome (நல்வரவு) can also be used in Kolam. Volunteering to draw the kolam at temple is sometimes done when a devotee's wishes are fulfilled.

For special occasions limestone and red brick powder to contrast are also used. Though kolams [7] are usually done with dry rice flour, for longevity, dilute rice paste or even paints are also used. Modern interpretations have accommodated chalk, and more recently vinyl stickers.

Though not as flamboyant as its other Indian contemporary, Rangoli, which is extremely colourful, a South Indian Kolam is all about symmetry, precision, and complexity.[8] Due to their complexity, trying to figure out how, exactly, these designs were drawn can be a challenge that some viewers find enjoyable.