Sandra L. Frankel is the former Supervisor of the Town of Brighton, Monroe County, New York. A former Brighton school board member (6 years) and BOCES I Monroe Board of Education (10 years), Vice President of both, Frankel served for 20 years as town supervisor, the elected executive of an urban suburb of 35,000 population.

In 1998, Frankel won the Democratic nomination for Lieutenant Governor of New York in the 1998 statewide Primary Election. She lost the general election on a ticket with then New York City Council Speaker Peter Vallone. Republican Mary Donohue won the lieutenant governorship on a ticket with George Pataki.

In 2002, Frankel sought the lieutenant governorship again, but dropped out to foster party unity and endorsed Dennis Mehiel, who lost the general election on a ticket with State Comptroller Carl McCall.

Frankel was one of many names mentioned as a potential candidate for the New York's 29th congressional district election, 2010. She declined to run, leaving the race to Matthew Zeller. 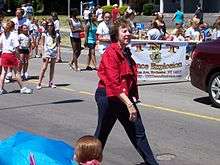