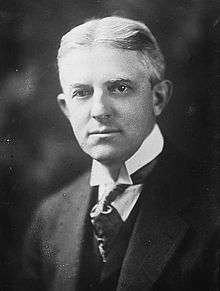 George R. Lunn was born June 23, 1873 on a farm located near the small town of Lenox, Taylor County, Iowa.[1] His parents, Martin Adolphus Lunn and the former Martha Bratton, reared 6 surviving children, four boys and two girls, with three others dying in infancy.[2]

The son and grandson of farmers, Lunn was raised in a conservative religious household which strictly observed the Sabbath and regarded the playing of musical instruments in church to be an unacceptable nod to secularity.[3] The family relocated to the city of Des Moines when George was just a boy, and he quit school at the age of 12 to work there as a paperboy.[1]

At the age of 17 Lunn left home and briefly relocated to Council Bluffs, Iowa.[4] He then made his way further west to Omaha, Nebraska, where he worked as the driver of a delivery wagon.[1] As a teenager, Lunn decided to enter the Christian ministry and he began three years of preparatory educational work to make up the high school education that he lacked.[4]

He was accepted to Bellevue College in Bellevue, Nebraska, enrolling in the fall of 1892 and graduating in 1897.[1] In 1893 the 20-year old Lunn was approached by the congregation of a small church in La Platte, Nebraska, located five miles south of Bellevue, and was asked to become their pastor.[5] Although he had never preached before, church parishioners were not aware of this fact and Lunn accepted the position.[5] He would retain the position for several years, paid out of the church's weekly collections.[5]

Lunn was anxious to attend the Princeton Theological Seminary and in the fall of 1897 he enrolled there.[6] However, near the end of his first year at Princeton the Spanish-American War erupted.[6] He returned home to Omaha to take over a Presbyterian pastorate for the summer, where he was convinced to take a position offered him as a chaplain in the United States Army, holding the rank of Corporal as part of the Company A of the Third Nebraska Regiment.[1] He spent the duration of the brief war stationed in Jacksonville, Florida.[7]

Lunn married in May 1901[7] and upon graduation was assigned by the church to a position as associate pastor of a Presbyterian congregation in Brooklyn, New York.[1] He would remain there until 1904, at which time he was named the pastor of the First Dutch Reformed Church of Schenectady, New York — the city with which he would become intimately associated.[1]

Closely concerned with matters of ethics and poverty, Lunn became a Christian socialist, testifying the social gospel from the pulpit. Seeking to eliminate suffering through structural change, Lunn joined the Socialist Party of America and in 1911 he was elected Mayor of Schenectady at the head of the local Socialist ticket.[1] His term was marked by a commitment to expansion of the city's parks and playgrounds, establishment of city health centers, and improvements in the local system of public schools and in garbage collections — the classic range of practical programmatic interests later known as sewer socialism.[1]

During his first term of office, Lunn was invited to speak in support of a strike then in progress in the town of Little Falls, New York.[1] He accepted the offer but was denied permission to speak by city officials in a public park.[1] Lunn nevertheless attempted to speak, reading from Abraham Lincoln's Gettysburg address and wound up as one of four people arrested on charges of "inciting to riot"[8] — charges later dropped when the tension of the situation lessened.[1]

Lunn's first term ran from 1911 to 1913 and he was returned to office for a second two-year term in 1915, again on the ticket of the Socialist Party. During his second term of office, Lunn was approached by officials of the Democratic Party and invited to switch parties for a run for United States Congress.[1]

Lunn retired to Del Mar, California, where he died on November 27, 1948.[18] He was buried at Forest Lawn Memorial Park in Glendale, California.[19]

Together with his first wife, the former Mabel Healy of Brooklyn, Lunn raised a total of 5 children.[1] Made a widower in 1931, Lunn remarried in 1932, wedding Anita Oliver Jensen of California.[1]