Santos (Portuguese pronunciation: [ˈsɐ̃tus], Saints) is a municipality in the Brazilian state of São Paulo, founded in 1546 by the Portuguese nobleman Brás Cubas.[2] It is partially located on the island of São Vicente, which harbors both the city of Santos and the city of São Vicente, and partially on the mainland. It is the main city in the metropolitan region of Baixada Santista.[3] The population is 433,966 (2015 est.) in an area of 280.67 km².[1] The city is also home to the Coffee Museum, where coffee prices were once negotiated. There is also a football memorial, dedicated to the city's greatest players, which includes Pelé, who played for Santos Futebol Clube. Its beachfront garden, 5,335 m (5,834 yd) in length, figures in the Guinness Book of Records as the largest beachfront garden in the world.

The exportation of coffee from the Port of Santos gave rise to the city and mostly accounted for the wealth of the city at the turn of the 20th century. Exportation and importation through its port have made it the modern city one finds today and turned it into the indispensable outlet for the production of the powerhouse that is São Paulo State. Adorning the landscape of the port city are the canals that are over a hundred years old. In 1899, Santos was the point of entry for the bubonic plague into Brazil.[4] In 1924, it became the seat of the Roman Catholic Diocese of Santos.

In October 2006, light crude oil was discovered off the coast in the Santos basin.[5]

Santos is about 79 km (49 mi) from the metropolis São Paulo, capital of the state São Paulo.

It is divided into two distinct geographic areas: the heavily urbanized island and the continental area, about 70% of which is protected. The areas differ radically in terms of population, economy and geography. 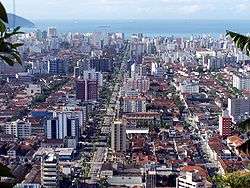 Santos partially lies on the island of São Vicente (Saint Vincent), whose territory is divided with the neighboring municipality of São Vicente. It is a densely urbanized area of 39.4 km2 (15.2 sq mi) that houses almost all the inhabitants of the city. It includes a flat area - Plain Coastal extension of the State of São Paulo - which has altitudes that rarely go above twenty meters above sea level, and an area composed of isolated hills called the Mass of São Vicente, the former home and endowed an urban illegal occupation with a mix of families characterized by high and low incomes, whose height does not exceed 200 meters above sea level.

The flat region of the island is almost completely devoid of native vegetation, although in the north region of the island - especially in the Alemoa, Chico de Paula and Saboó neighbourhoods - there are still remnants of mangroves. Before the occupation of the area of the island by 'chácaras' - rural residences, and subsequently by urbanization, there was a vast flooded land covered by mangroves, the native Atlantic Forest, and coastal vegetation.

On the city hills one can still find vast areas covered by the native Atlantic Forest, in spite of the existing chácaras and banana harvesting farms in the area. The 'Lagoa da Saudade' (Homesickness Lagoon), a pond located in one of the aforementioned hills, Morro Nova Cintra, was known to host a kind of caiman. The lagoon is also a popular destination among families in the city due to its playgrounds, barbecue kiosks, picnic spots and green areas. The disordered occupation of the hills represents both an environmental as well as a geological risk: the deforestation leads to frequent landslides, mainly from January to March, the traditional rainy season in the region.

Most rivers in the island were channeled when engineer Saturnino de Brito designed the system of canals in the city. As examples, we can cite the rivers Dois Rios ("Two Rivers") and Ribeirao dos Soldados ("Soldiers Creek"), which is nowadays referred by santistas as the 'Canal 4' on Avenue Siqueira Campos.

Major water courses cut the island in the north, such as the Rio de São Jorge (St. George River), which suffers from the problems of pollution and silting due to the occupation of its banks by slums.

Despite the fact that it is located just outside the tropics, Santos has a tropical rainforest climate with no real dry season. Tropical rainforest climates are typically found near the equator, so Santos featuring this type of climate is an exceptional situation. All months of the year averages more than 60 mm of rainfall during the course of the year. Santos features warm weather throughout the year, though June in Santos is somewhat cooler (and drier) than January. The average temperature in the city during the month of June is 23 °C, while the average temperature in January is 28 °C. Precipitation in Santos is appallingly copious, amounting to 2,081 mm (81.9 in) annually. Santos lies in one of the few isolated regions of Brazil outside of the tropical Amazon Basin that receive more than 2,000 mm (79 in) of total average precipitation annually, although nearby Ubatuba, approximately 140 km (87 mi) to the east-northeast, is considerably wetter than Santos, receiving an average of 2,645 mm (104.1 in) of precipitation annually. The Köppen Climate Classification subtype for this climate is "Af" (Tropical Rainforest Climate).[6]

Santos has the biggest seaport in Latin America, which handled over 72 million tons in 2006. It has large industrial complexes and shipping centers, which handle a large portion of the world's coffee exports, as well as a number of other Brazilian exports including steel, oil, cars, oranges, bananas and cotton.

Treemap showing the market share of exports, by product, for the municipality of Santos, São Paulo in 2014 generated by DataViva