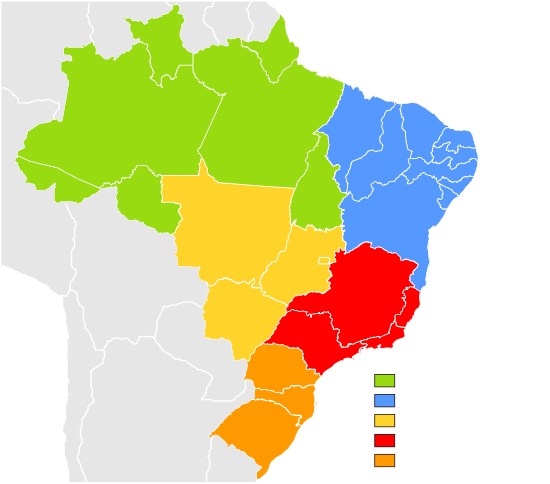 Brazil is geopolitically divided into five regions (also called macroregions) by the Instituto Brasileiro de Geografia e Estatística (IBGE); each region is composed of three or more states. Although officially recognized, the division is merely academic, considering geographic, social and economic factors, among others, and has no political effects other than orientating Federal-level government programs. On state level, there are also mesoregion and microregion. There are 137 mesoregions and 558 microregions. 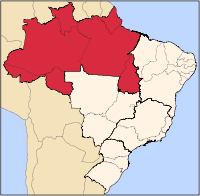 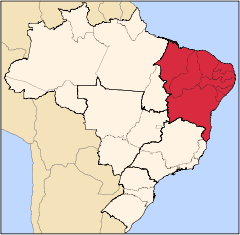 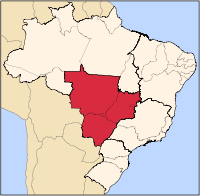 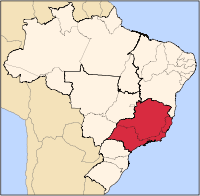 The state of São Paulo is over 70% White with 30 million people having European or Caucasian phenotype and is also home to the largest Jewish and Arab diasporas, as well as the largest Japanese, Korean and Chinese populations in the country. The states of Rio de Janeiro, Espírito Santo and Minas Gerais have respectively 8, 2 and 9 million White citizens. Most of the Black descendants live in the North of Minas Gerais thanks to the colonial Gold Rush and in the state of Rio de Janeiro due to the Court being situated at the city of Rio de Janeiro in the neuter district of Guanabara during the monarchical period. 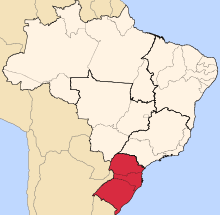 The state of Santa Catarina is proportionally the Whitest state in Brazil with over 87% of its population being European. The other Southern states also have the highest percentage rates of European population.

The composition of regions of Brazil according to autosomal genetic studies focused on the Brazilian population (which has been found to be a complex melting pot of European, African and Native Americans components):

A 2011 autosomal DNA study, with nearly 1000 samples from all over the country ("whites", "pardos" and "blacks"), found a major European contribution, followed by a high African contribution and an important Native American component.[2] The study showed that Brazilians from different regions are more homogeneous than previously thought by some based on the census alone. "Brazilian homogeneity is, therefore, a lot greater between Brazilian regions than within Brazilian regions."[3]

According to an autosomal DNA study from 2010, a new portrayal of each ethnicity contribution to the DNA of Brazilians, obtained with samples from the five regions of the country, has indicated that, on average, European ancestors are responsible for nearly 80% of the genetic heritage of the population. The variation between the regions is small, with the possible exception of the South, where the European contribution reaches nearly 90%. The results, published by the scientific American Journal of Human Biology by a team of the Catholic University of Brasília, show that, in Brazil, physical indicators such as colour of skin, eyes and hair have little to do with the genetic ancestry of each person, which has been shown in previous studies (regardless of census classification).[4] Ancestry informative SNPs can be useful to estimate individual and population biogeographical ancestry. Brazilian population is characterized by a genetic background of three parental populations (European, African, and Brazilian Native Amerindians) with a wide degree and diverse patterns of admixture. In this work we analyzed the information content of 28 ancestry-informative SNPs into multiplexed panels using three parental population sources (African, Amerindian, and European) to infer the genetic admixture in an urban sample of the five Brazilian geopolitical regions. The SNPs assigned apart the parental populations from each other and thus can be applied for ancestry estimation in a three hybrid admixed population. Data was used to infer genetic ancestry in Brazilians with an admixture model. Pairwise estimates of F(st) among the five Brazilian geopolitical regions suggested little genetic differentiation only between the South and the remaining regions. Estimates of ancestry results are consistent with the heterogeneous genetic profile of Brazilian population, with a major contribution of European ancestry (0.771) followed by African (0.143) and Amerindian contributions (0.085). The described multiplexed SNP panels can be useful tool for bioanthropological studies but it can be mainly valuable to control for spurious results in genetic association studies in admixed populations."[5]

An autosomal DNA study from 2009 found a similar profile "all the Brazilian samples (regions) lie more closely to the European group than to the African populations or to the Mestizos from Mexico."[6]

According to another autosomal DNA study from 2008, by the University of Brasília (UnB), European ancestry dominates in the whole of Brazil (in all regions), accounting for 65.90% of heritage of the population, followed by the African contribution (24.80%) and the Native American (9.3%); the European ancestry being the dominant ancestry in all regions including the Northeast of Brazil.[7]

A study from 1965, "Methods of Analysis of a Hybrid Population" (Human Biology, vol 37, number 1), led by geneticists D. F. Roberts and R. W. Hiorns, found out the average Northeastern Brazilian to be predominantly European in ancestry (65%), with minor but important African and Native American contributions (25% and 9%).[8]