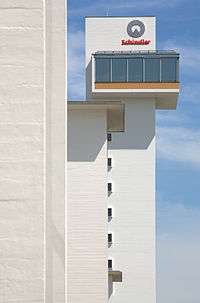 Schindler Test Tower at the Head Office in Ebikon, Canton of Lucerne, Switzerland 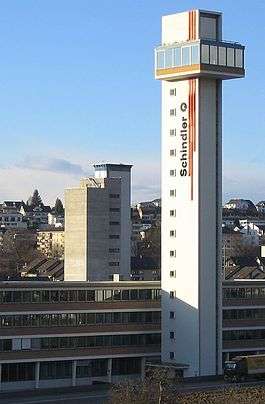 Schindler Miconic 10 keypad. This is the version in Hong Kong.

The Schindler Group is a manufacturer of escalators , elevators and moving walkways worldwide, founded in Switzerland in 1874. Schindler produces, installs, maintains and modernizes elevators and escalators in many types of buildings including residential, commercial and high-rise buildings. The company is present in more than 140 countries and employs more than 56,000 persons worldwide.[1] The production facilities are located in Brazil, China, Slovakia, Spain, Switzerland, India and the United States.[2]

The company was founded in Switzerland in 1874, by Robert Schindler and Eduard Villiger who established the collective joint partnership Schindler & Villiger.[3] Shortly thereafter, a mechanical engineering workshop was built on an island in the river Reuss in Lucerne, Switzerland, for the production of lifting equipment and machines of all types.

Schindler entered the North American elevator market with the purchase of Toledo-based Haughton Elevator Company in 1979 - briefly branding their products as Schindler-Haughton. In 1989, the company dramatically increased its presence in the United States after acquiring the Elevator/Escalator division of Westinghouse, one of the largest producers of elevators and escalators at the time. Currently, Schindler Elevator Corporation, the United States operations of Schindler Group, is based in Morristown, New Jersey.[4]

In February 2007, Schindler, along with competitors Otis Elevator Co., ThyssenKrupp, Kone, and Mitsubishi Elevator Europe were fined by the European Union for a price-fixing cartel. Schindler was fined 144 million euros, or about $189.3 million US dollars.[5]

Since 2011, Schindler have sponsored Solar Impulse, a solar-powered aircraft.[6]

The company's name for their proprietary control system, was introduced in 1995. It was the industry's first example of control system now known as "hall call" destination system. The system features keypads and LED screens instead of hall button stations whereby riders enter their desired floor before entering an elevator car. The system then directs the rider to a specific elevator car, while grouping riders traveling to nearby floors together. Schindler claims this minimizes the number of stops, and decreases congestion and travel time—especially during peak traffic periods.[8] The system was continuously further developed and new functions were amended, eventually evolving in systems which guarantee highly efficient and energy-saving traffic management. Especially in high rise buildings, traffic-management systems like Miconic 10 allow building designers to maximize rentable space and transportation efficiency. Moreover, access control becomes feasible.

Schindler ID is an evolution of the Miconic 10 system. It is a security system that provides customized elevator services suitable for both new and existing installations. It can divide a building into different zones with controlled access authority. It is an elevator access-control system for mid- and high-rise buildings that customizes service for each passenger using electronic identification badges.[9]

In 2009, the PORT technology was launched. It centers on a Personal Occupant Requirement Terminal (PORT)- a universal communication system that is interconnected throughout the building. This communication platform makes it possible to calculate the optimal route to any destination in the building. The PORT technology is an advanced transit and destination dispaching system for buildings with special requirements regarding access, security and passenger management.[10]

Since 2003, Schindler has sponsored the "Schindler Award", a biannual prize for the design of inclusive and accessible urban areas. The competition is open to all students in their final year of study on a bachelor’s course or those enrolled on a master’s course at a European university or college of architecture. If 12 or more students from the same school apply to enter the competition, that school qualifies to participate in the schools’ competition. The Schindler Award 2010 attracted almost 1,400 participants and is therefore one of the most recognized and popular architectural competitions for students in Europe. The Schindler Award 2012, was held in Berne, Switzerland. The next competition will take place in 2014 in the city of Shenzhen, China. For the first time in history, the Schindler Award will be open for students worldwide.[15]