Ishikawa Prefecture (石川県, Ishikawa-ken) is a prefecture of Japan located in the Chūbu region on Honshū island.[1] The capital is Kanazawa.[2]

Ishikawa was formed in 1872 from the merger of Kaga Province and the smaller Noto Province.[3]

Ishikawa is on the Sea of Japan coast. The northern part of the prefecture consists of the narrow Noto Peninsula, while the southern part is wider and consists mostly of mountains with the prefecture's chief city, Kanazawa, located in the coastal plain. The prefecture also has some islands, including Notojima, Mitsukejima, Hegurajima.

As of April 1, 2012, 13% of the total land area of the prefecture was designated as Natural Parks, namely the Hakusan National Park; Echizen-Kaga Kaigan and Noto Hantō Quasi-National Parks; and five Prefectural Natural Parks.[4] 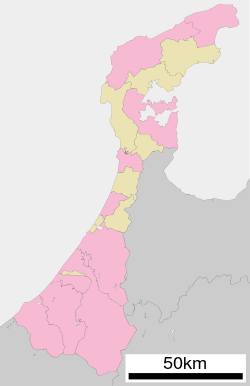 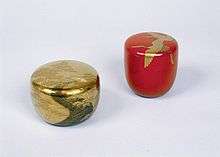 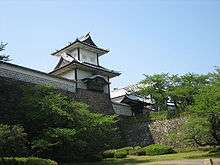 The area is noted for arts and crafts and other cultural traditions:

The most popular destination in Ishikawa is Kanazawa. Tourists can get to Ishikawa by plane via either the Komatsu or Noto airports. Popular sites include: 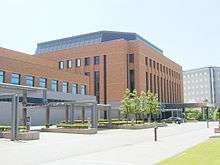 The current governor of Ishikawa is Masanori Tanimoto who was first elected in 1994 and has been reelected for a sixth term in the gubernatorial election in March 2014.[5] Tanimoto is currently one of two governors who are in their sixth term nationwide, the other being Masaru Hashimoto of Ibaraki. Tanimoto is only the fourth governor of Ishikawa since 1947 when prefectural governors became elected offices, as predecessor Yōichi Nakanishi had held the governorship even longer than Tanimoto, winning his first election in 1963 and then serving eight consecutive terms until his death in 1994.

The prefectural assembly of Ishikawa has 43 members and is elected in unified local elections (last round: 2011) in 15 SNTV electoral districts – six single-member, five two-member, one three-member, two four-member districts and the Kanazawa City district that elects 16 members. As of February 26, 2014, the LDP prefectural assembly caucus has 25 members and no other group has more than four members.[6]

In the National Diet, Ishikawa is represented by three directly elected members of the House of Representatives and two (one per election) of the House of Councillors. Additional members from the prefecture may be elected in the proportional representation segments of both houses: the Hokuriku-Shin'etsu proportional representation block in the lower house, the proportional election to the upper house is nationwide. After the Diet elections of 2010, 2012 and 2013, the five directly elected members from Ishikawa districts are all Liberal Democrats, namely: