For other uses, see Scourge (disambiguation). 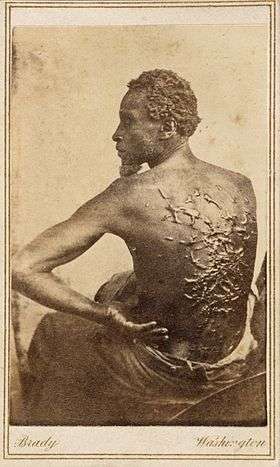 Medical examination photo of Gordon showing his scourged back, widely distributed by Abolitionists to expose the brutality of slavery.

A scourge is a whip or lash, especially a multi-thong type, used to inflict severe corporal punishment or self-mortification on the back.

The word is most commonly considered to be derived from Old French escorgier - "to whip", going further back to the Vulgar Latin excorrigiare: the Latin prefix ex- "out, off" with its additional English meaning of "thoroughly", plus corrigia - "thong", or in this case "whip". Some connect it to Latin: 'excoriare', "to flay", built of two Latin parts, ex- ("off") and corium, "skin". 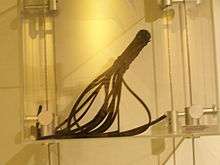 Reproduction of a medieval scourge

The typical scourge (Latin: flagrum; diminutive: flagellum) has several thongs fastened to a handle; the cat o' nine tails has two versions: the navy version is made of thick ropes with knotted ends, the army and civil prison versions usually are leather.[1]

The scourge, or flail, and the crook are the two symbols of power and domination depicted in the hands of Osiris in Egyptian monuments.[2] They are the unchanging form of the instrument throughout the ages,[1] though one interpretation of the flail depicted in Egyptian mythology is that it was an agricultural instrument used to thresh wheat, not implement corporal punishment.[3]

The priests of Cybele scourged themselves and others. Such stripes were considered sacred.[4]

Hard material can be affixed to multiple thongs to give a flesh-tearing "bite". A scourge with these additions is called a scorpion scorpio "scorpion" is Latin for a Roman flagrumand is referred to in the Bible: 1 Kings 12:11: "...My father scourged you with whips; I will scourge you with scorpions" said Rehoboam, referring to increased conscription and taxation beyond Solomon's. The name testifies to the pain caused by the arachnid. To its generous Roman application testifies the existence of the Latin words Flagrifer 'carrying a whip' and Flagritriba 'often-lashed slave'.[4] According to the Gospel of John, Pontius Pilate, the Roman governor of Judea, ordered Jesus to be scourged.[5] 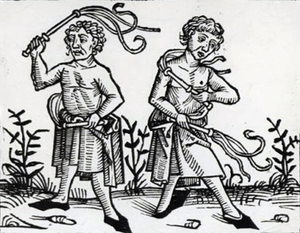 Fifteenth-century woodcut of flagellants scourging themselves

Scourging was soon adopted as a sanction in the monastic discipline of the fifth and following centuries. Early in the fifth century it is mentioned by Palladius of Galatia in the Historia Lausiaca,[6] and Socrates Scholasticus[7] tells us that, instead of being excommunicated, offending young monks were scourged. (See the sixth-century rules of St. Cæsarius of Arles for nuns,[8] and of St. Aurelian of Arles.[9]) Thenceforth scourging is frequently mentioned in monastic rules and councils as a preservative of discipline.[10] Its use as a punishment was general in the seventh century in all monasteries of the severe Columban rule.[11]

Canon law (Decree of Gratian, Decretals of Gregory IX) recognized it as a punishment for ecclesiastics; even as late as the sixteenth and seventeenth centuries, it appears in ecclesiastical legislation as a punishment for blasphemy, concubinage and simony. Though doubtless at an early date a private means of penance and mortification, such use is publicly exemplified in the tenth and eleventh centuries by the lives of St. Dominic Loricatus[12] and St. Peter Damian (died 1072). The latter wrote a special treatise in praise of self-flagellation; though blamed by some contemporaries for excess of zeal, his example and the high esteem in which he was held did much to popularize the voluntary use of the scourge or "discipline" as a means of mortification and penance. From then on the practice appeared in most medieval religious orders and associations.[4]

The practice was, of course, capable of abuse, as demonstrated in the thirteenth century by the rise of the fanatical sect of the Flagellants, though in the same period we meet with the private use of the "discipline" by such saintly persons as King Louis IX of France and Elisabeth of Hungary.[4]

Semi-literal usages such as "the scourge of God" for Attila the Hun (i.e. "God's whip with which to punish the nations") led to metaphoric uses to mean a severe affliction, e.g. "the scourge of drug abuse".