This article is about the outer covering of animals. For skin in humans, see human skin. For other uses, see Skin (disambiguation).

Skin is the soft outer covering of vertebrates. Other animal coverings, such as the arthropod exoskeleton have different developmental origin, structure and chemical composition. The adjective cutaneous means "of the skin" (from Latin cutis, skin). In mammals, the skin is an organ of the integumentary system made up of multiple layers of ectodermal tissue, and guards the underlying muscles, bones, ligaments and internal organs. Skin of a different nature exists in amphibians, reptiles, and birds.[1] All mammals have some hair on their skin, even marine mammals like whales, dolphins, and porpoises which appear to be hairless. The skin interfaces with the environment and is the first line of defense from external factors. For example, the skin plays a key role in protecting the body against pathogens[2] and excessive water loss.[3] Its other functions are insulation, temperature regulation, sensation, and the production of vitamin D folates. Severely damaged skin may heal by forming scar tissue. This is sometimes discoloured and depigmented. The thickness of skin also varies from location to location on an organism. In humans for example, the skin located under the eyes and around the eyelids is the thinnest skin in the body at 0.5 mm thick, and is one of the first areas to show signs of aging such as "crows feet" and wrinkles. The skin on the palms and the soles of the feet is 4 mm thick and the back is 14 mm thick and is the thickest skin in the body. The speed and quality of wound healing in skin is promoted by the reception of estrogen.[4][5][6]

Fur is dense hair.[7] Primarily, fur augments the insulation the skin provides but can also serve as a secondary sexual characteristic or as camouflage. On some animals, the skin is very hard and thick, and can be processed to create leather. Reptiles and fish have hard protective scales on their skin for protection, and birds have hard feathers, all made of tough β-keratins. Amphibian skin is not a strong barrier, especially regarding the passage of chemicals via skin and is often subject to osmosis and diffusive forces. For example, a frog sitting in an anesthetic solution would be sedated quickly, as the chemical diffuses through its skin. Amphibian skin plays key roles in everyday survival and their ability to exploit a wide range of habitats and ecological conditions.[8]

Structure in humans and mammals

The epidermis is composed of the outermost layers of the skin. It forms a protective barrier over the body's surface, responsible for keeping water in the body and preventing pathogens from entering, and is a stratified squamous epithelium,[9] composed of proliferating basal and differentiated suprabasal keratinocytes.

Keratinocytes are the major cells, constituting 95% of the epidermis,[9] while Merkel cells, melanocytes and Langerhans cells are also present. The epidermis can be further subdivided into the following strata or layers (beginning with the outermost layer):[10]

Keratinocytes in the stratum basale proliferate through mitosis and the daughter cells move up the strata changing shape and composition as they undergo multiple stages of cell differentiation to eventually become anucleated. During that process, keratinocytes will become highly organized, forming cellular junctions (desmosomes) between each other and secreting keratin proteins and lipids which contribute to the formation of an extracellular matrix and provide mechanical strength to the skin.[11] Keratinocytes from the stratum corneum are eventually shed from the surface (desquamation).

The epidermis contains no blood vessels, and cells in the deepest layers are nourished by diffusion from blood capillaries extending to the upper layers of the dermis.

The epidermis and dermis are separated by a thin sheet of fibers called the basement membrane, and is made through the action of both tissues. The basement membrane controls the traffic of the cells and molecules between the dermis and epidermis but also serves, through the binding of a variety of cytokines and growth factors, as a reservoir for their controlled release during physiological remodeling or repair processes.[12]

The dermis is the layer of skin beneath the epidermis that consists of connective tissue and cushions the body from stress and strain. The dermis provides tensile strength and elasticity to the skin through an extracellular matrix composed of collagen fibrils, microfibrils, and elastic fibers, embedded in hyaluronan and proteoglycans.[11] Skin proteoglycans are varied and have very specific locations.[13] For example, hyaluronan, versican and decorin are present throughout the dermis and epidermis extracellular matrix, whereas biglycan and perlecan are only found in the epidermis.

It harbors many mechanoreceptors (nerve endings) that provide the sense of touch and heat through nociceptors and thermoreceptors. It also contains the hair follicles, sweat glands, sebaceous glands, apocrine glands, lymphatic vessels and blood vessels. The blood vessels in the dermis provide nourishment and waste removal from its own cells as well as for the epidermis.

The dermis is tightly connected to the epidermis through a basement membrane and is structurally divided into two areas: a superficial area adjacent to the epidermis, called the papillary region, and a deep thicker area known as the reticular region.

The papillary region is composed of loose areolar connective tissue.This is named for its fingerlike projections called papillae that extend toward the epidermis. The papillae provide the dermis with a "bumpy" surface that interdigitates with the epidermis, strengthening the connection between the two layers of skin.

The reticular region lies deep in the papillary region and is usually much thicker. It is composed of dense irregular connective tissue, and receives its name from the dense concentration of collagenous, elastic, and reticular fibers that weave throughout it. These protein fibers give the dermis its properties of strength, extensibility, and elasticity. Also located within the reticular region are the roots of the hair, sebaceous glands, sweat glands, receptors, nails, and blood vessels.

The hypodermis is not part of the skin, and lies below the dermis. Its purpose is to attach the skin to underlying bone and muscle as well as supplying it with blood vessels and nerves. It consists of loose connective tissue and elastin. The main cell types are fibroblasts, macrophages and adipocytes (the hypodermis contains 50% of body fat). Fat serves as padding and insulation for the body. Another name for the hypodermis is the subcutaneous tissue.

Microorganisms like Staphylococcus epidermidis colonize the skin surface. The density of skin flora depends on region of the skin. The disinfected skin surface gets recolonized from bacteria residing in the deeper areas of the hair follicle, gut and urogenital openings. 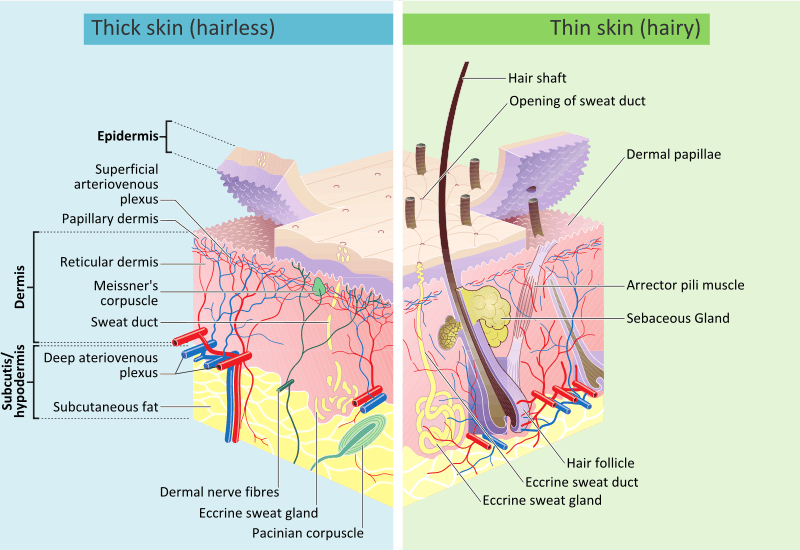 Skin layers, of both the hairy and hairless skin

Structure in other animals

The epidermis of fish and of most amphibians consists entirely of live cells, with only minimal quantities of keratin in the cells of the superficial layer. It is generally permeable, and in the case of many amphibians, may actually be a major respiratory organ. The dermis of bony fish typically contains relatively little of the connective tissue found in tetrapods. Instead, in most species, it is largely replaced by solid, protective bony scales. Apart from some particularly large dermal bones that form parts of the skull, these scales are lost in tetrapods, although many reptiles do have scales of a different kind, as do pangolins. Cartilaginous fish have numerous tooth-like denticles embedded in their skin, in place of true scales.

Sweat glands and sebaceous glands are both unique to mammals, but other types of skin gland are found in other vertebrates. Fish typically have a numerous individual mucus-secreting skin cells that aid in insulation and protection, but may also have poison glands, photophores, or cells that produce a more watery, serous fluid. In amphibians, the mucus cells are gathered together to form sac-like glands. Most living amphibians also possess granular glands in the skin, that secrete irritating or toxic compounds.[14]

Although melanin is found in the skin of many species, in the reptiles, the amphibians, and fish, the epidermis is often relatively colourless. Instead, the colour of the skin is largely due to chromatophores in the dermis, which, in addition to melanin, may contain guanine or carotenoid pigments. Many species, such as chameleons and flounders may be able to change the colour of their skin by adjusting the relative size of their chromatophores.[14]

The epidermis of birds and reptiles is closer to that of mammals, with a layer of dead keratin-filled cells at the surface, to help reduce water loss. A similar pattern is also seen in some of the more terrestrial amphibians such as toads. However, in all of these animals there is no clear differentiation of the epidermis into distinct layers, as occurs in humans, with the change in cell type being relatively gradual. The mammalian epidermis always possesses at least a stratum germinativum and stratum corneum, but the other intermediate layers found in humans are not always distinguishable. Hair is a distinctive feature of mammalian skin, while feathers are (at least among living species) similarly unique to birds.[14]

Birds and reptiles have relatively few skin glands, although there may be a few structures for specific purposes, such as pheromone-secreting cells in some reptiles, or the uropygial gland of most birds.[14] 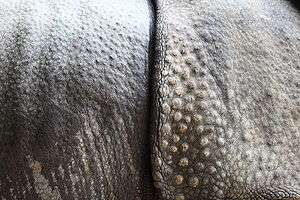 A close up picture of a rhinoceros skin.

Skin is a soft tissue and exhibits key mechanical behaviors of these tissues. The most pronounced feature is the J-curve stress strain response, in which a region of large strain and minimal stress exists, and corresponds to the microstructural straightening and reorientation of collagen fibrils.[17] In some cases the intact skin is prestreched, like wetsuits around the diver's body, and in other cases the intact skin is under compression. Small circular holes punched on the skin may widen or close into ellipses, or shrink and remain circular, depending on preexisting stresses.[18]

The term "skin" may also refer to the covering of a small animal, such as a sheep, goat (goatskin), pig, snake (snakeskin) etc. or the young of a large animal.

The term hides or rawhide refers to the covering of a large adult animal such as a cow, buffalo, horse etc.

Skins and hides from the different animals are used for clothing, bags and other consumer products, usually in the form of leather, but also as furs.

Skin from sheep, goat and cattle was used to make parchment for manuscripts.

Skin can also be cooked to make pork rind or crackling.