A distinction is sometimes made between sex and gender. Sex differences generally refer to traits that are sexually dimorphic. Such differences are hypothesized to be products of the evolutionary process of sexual selection.[2][3] By contrast, the term gender differences refers to average group differences between males and females that are presumably based on sexually monomorphic (the same between the sexes) biological adaptations.

Sex differences in medicine include sex-specific diseases, which are diseases that occur only in people of one sex; and sex-related diseases, which are diseases that are more usual to one sex, or which manifest differently in each sex. For example, certain autoimmune diseases may occur predominantly in one sex, for unknown reasons. 90% of primary biliary cirrhosis cases are women, whereas primary sclerosing cholangitis is more common in men. Gender-based medicine, also called "gender medicine", is the field of medicine that studies the biological and physiological differences between the human sexes and how that affects differences in disease. Traditionally, medical research has mostly been conducted using the male body as the basis for clinical studies. Similar findings are also reported in the sport medicine literature where males typically account for >60% of the individuals studied.[4] The findings of these studies have often been applied across the sexes and healthcare providers have assumed a uniform approach in treating both male and female patients. More recently, medical research has started to understand the importance of taking the sex into account as the symptoms and responses to medical treatment may be very different between sexes.[5]

Neither concept should be confused with sexually transmitted diseases, which are diseases that have a significant probability of transmission through sexual contact.

Sex differences in human physiology are distinctions of physiological characteristics associated with either male or female humans. These can be of several types, including direct and indirect. Direct being the direct result of differences prescribed by the Y-chromosome, and indirect being a characteristic influenced indirectly (e.g., hormonally) by the Y-chromosome. Sexual dimorphism is a term for the phenotypic difference between males and females of the same species.

Direct sex differences follow a bimodal distribution. Through the process of meiosis and fertilization (with rare exceptions), each individual is created with zero or one Y-chromosome. The complementary result for the X-chromosome follows, either a double or a single X. Therefore, direct sex differences are usually binary in expression (although the deviations in complex biological processes produce a menagerie of exceptions). These include, most conspicuously, male (vs female) gonads.

Indirect sex differences are general differences as quantified by empirical data and statistical analysis. Most differing characteristics will conform to a bell-curve (i.e., normal) distribution which can be broadly described by the mean (peak distribution) and standard deviation (indicator of size of range). Often only the mean or mean difference between sexes is given. This may or may not preclude overlap in distributions. For example, most males are taller and stronger than females,[6] but an individual female could be taller and stronger than an individual male. The extents of these differences vary across societies.[7]

The most obvious differences between males and females include all the features related to reproductive role, notably the endocrine (hormonal) systems and their physiological and behavioral effects, including gonadal differentiation, internal and external genital and breast differentiation, and differentiation of muscle mass, height, and hair distribution.

Research on biological sex differences in human psychology investigates cognitive and behavioral differences between men and women. This research employs experimental tests of cognition, which take a variety of forms. Tests focus on possible differences in areas such as IQ, spatial reasoning, aggression, emotion, and brain structure and function.

Chromosomal make up is important in human psychology. Women have two X chromosomes while males have an X and Y chromosomal structure. The X chromosome is much more active than Y and it affects behavior.[8] Genetic researchers theorize that the X chromosome may contain a gene responsible for sociability.[9]

Most IQ tests are constructed so that there are no overall score differences between females and males. Areas where differences have been found include verbal and mathematical ability.[10][11] IQ tests that measure fluid g and have not been constructed to eliminate sex differences also tend to show that sex differences are either non-existent or negligible.[11][12] 2008 research found that, for grades 2 to 11, there were no significant gender differences in math skills among the general population.[13]

Because social and environmental factors affect brain activity and behavior, where differences are found, it can be difficult for researchers to assess whether or not the differences are innate. Studies on this topic explore the possibility of social influences on how both sexes perform in cognitive and behavioral tests. Stereotypes about differences between men and women have been shown to affect a person's behavior (this is called stereotype threat).[16][17]

In his book titled Gender, Nature, and Nurture, psychologist Richard Lippa found that there were large differences in women's and men's preferences for realistic occupations (for example, mechanic or carpenters) and moderate differences in their preferences for social and artistic occupations. His results also found that women tend to be more people-oriented and men more thing-oriented.[18]

In 2005, Janet Shibley Hyde from the University of Wisconsin-Madison introduced the gender similarities hypothesis, which suggests that males and females are similar on most, but not all, psychological variables. The research focused on cognitive variables (for example, reading comprehension, mathematics), communication (for example, talkativeness, facial expressions), social and personality (for example, aggression, sexuality), psychological well-being, and motor behaviors. Using results from a review of 46 meta-analyses, she found that 78% of gender differences were small or close to zero. A few exceptions were some motor behaviors (such as throwing distance) and some aspects of sexuality (such as attitudes about casual sex), which show the largest gender differences. She concludes her article by stating: "It is time to consider the costs of overinflated claims of gender differences. Arguably, they cause harm in numerous realms, including women’s opportunities in the workplace, couple conflict and communication, and analyses of self-esteem problems among adolescents."[21]

Hyde also stated elsewhere that "variations within genders are greater than variations between genders."[22]

In 2012 Irina Trofimova [23] reported “middle age – middle sex” phenomenon and suggested that the significant female advantage in verbal fluency and male advantage in physical power fade after age 25 in an asymmetric manner. She pointed out to several other studies on humans and other primates showing a levelling of sex differences in sociability and physical strength. Males and females might indeed have different timings of maturation of physical and verbal systems: according to McGuinness and Pribram (1978) during the first two years of life talking and walking rarely occur simultaneously, which suggests that these two abilities compete for the same set of neural connections, or that one type of neural organization inhibits the other. This coincides with the higher mobility of boys, accompanied by their lower rates of speech development in childhood, in comparison to girls. These different timings in maturation appear as sex differences in early age, and likely level off in later adulthood (Barbu, Cabanes, & Le Maner-Idrissi, 2011). This middle age – middle sex phenomenon might explain why meta-analytic reports and several experimental studies of verbal abilities and dominance using adult participants reported no sex differences.

Sex differences in crime are differences between men and women as the perpetrators or victims of crime. Such studies may belong to fields such as criminology (the scientific study of criminal behavior), sociobiology (which attempts to demonstrate a causal relationship between biological factors, in this case biological sex and human behaviors), or feminist studies. Statistics have been consistent in reporting that men commit more criminal acts than women.[24][25] Self-reported delinquent acts are also higher for men than women across many different actions.[26] Many professionals have offered explanations for this sex difference. Some differing explanations include men's evolutionary tendency toward risk and violent behavior, sex differences in activity, social support, and gender inequality.

Despite the difficulty of interpreting them, crime statistics may provide a way to investigate such a relationship from a gender differences perspective. An observable difference in crime rates between men and women might be due to social and cultural factors, crimes going unreported, or to biological factors (for example, testosterone or sociobiological theories). Taking the nature of the crime itself into consideration may also be a factor. Crime can be measured by such data as arrest records, imprisonment rates, and surveys. However, not all crimes are reported or investigated. Moreover, some studies show that men can have an overwhelming bias against reporting themselves to be the victims of a crime (particularly when victimized by a woman), and some studies have argued that men reporting intimate partner violence find disadvantageous biases in law enforcement.[27][28][29] Burton et al. (1998) found that low levels of self control are associated with criminal activity.[30] 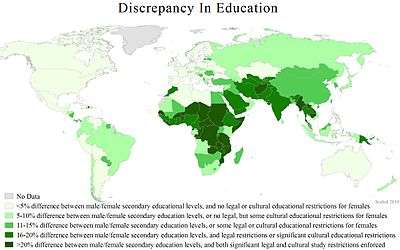 Sometimes and at some places, there are sex differences in educational achievement. This may be caused by sex discrimination in the law, in the culture, or may reflect natural differences in the interests of the sexes.[31]

Sex differences in social capital are differences between men and women in their ability to coordinate actions and achieve their aims through trust, norms and networks.[36] Social capital is often seen as the missing link in development; as social networks facilitate access to resources and protect the commons, while cooperation makes markets work more efficiently.[37] Social capital has been thought of as women's capital as whereas there are gendered barriers to accessing economic capital, women's role in family, and community ensures that they have strong networks. There is potential that the concept can help to bring women's unpaid 'community and household labor',[38] vital to survival and development, to the attention of economists. However, research analyzing social capital from a gendered perspective is rare, and the notable exceptions are very critical.[39][40][41]

Sex differences in suicide have been shown to be significant; there are highly asymmetric rates of attempted and completed suicide between males and females.[42] The gap, also called the gender paradox of suicidal behavior, can vary significantly between different countries.[43] Statistics indicate that males die much more often by means of suicide than do females, however reported suicide attempts are 3 times more common among females than males.[44] This paradox is explained by the methodology, with females more often choosing medication-induced overdosage, and males more often turning to weapons such as firearms or knives.[45]

Sex differences in financial decision making are relevant and significant. Numerous studies have found that women tend to be financially more risk-averse than men and hold safer portfolios.[46][47] A May 3, 2015 article in the Wall Street Journal by Georgette Jasen reported that "when it comes to investing, men sometimes have their way of doing things, and women have different ways."[48] Scholarly research has documented systematic differences in financial decisions such as buying investments versus insurance, donating to ingroups versus outgroups (such as terrorism victims in Iraq versus USA), spending in stores,[49] and the endowment effect-or asking price for goods people have.[50] The majority of these studies are based on the theory of agency-communion developed by David Bakan in 1966;[51] according to this theory, due to factors such as socialization, males are typically more agentic (focus on self, upside potential, aggressiveness) and females typically more communal (focus on others, downside potential, and nurturing). This framework robustly explains many financial decision making outcomes.