The reproductive system or genital system is a system of sex organs within an organism which work together for the purpose of sexual reproduction. Many non-living substances such as fluids, hormones, and pheromones are also important accessories to the reproductive system.[1] Unlike most organ systems, the sexes of differentiated species often have significant differences. These differences allow for a combination of genetic material between two individuals, which allows for the possibility of greater genetic fitness of the offspring.[2]

In mammals, the major organs of the reproductive system include the external genitalia (penis and vulva) as well as a number of internal organs including the gamete producing gonads (testicles and ovaries). Diseases of the human reproductive system are very common and widespread, particularly communicable sexually transmitted diseases.[3]

Most other vertebrate animals have generally similar reproductive systems consisting of gonads, ducts, and openings. However, there is a great diversity of physical adaptations as well as reproductive strategies in every group of vertebrates.

Vertebrate animals all share key elements of their reproductive systems. They all have gamete-producing organs or gonads. In females, these gonads are then connected by oviducts to an opening to the outside of the body, typically the cloaca, but sometimes to a unique pore such as a vagina or intromittent organ.

The human reproductive system usually involves internal fertilization by sexual intercourse. During this process, the male inserts his erect penis into the female's vagina and ejaculates semen, which contains sperm. The sperm then travels through the vagina and cervix into the uterus or fallopian tubes for fertilization of the ovum. Upon successful fertilization and implantation, gestation of the fetus then occurs within the female's uterus for approximately nine months, this process is known as pregnancy in humans. Gestation ends with birth, the process of birth is known as labor. Labor consists of the muscles of the uterus contracting, the cervix dilating, and the baby passing out the vagina (the female genital organ). Human's babies and children are nearly helpless and require high levels of parental care for many years. One important type of parental care is the use of the mammary glands in the female breasts to nurse the baby.[4]

The major reproductive organs of the male can be grouped into three categories. The first category is sperm production and storage. Production takes place in the testes which are housed in the temperature regulating scrotum, immature sperm then travel to the epididymis for development and storage. The second category are the ejaculatory fluid producing glands which include the seminal vesicles, prostate, and the vas deferens. The final category are those used for copulation, and deposition of the spermatozoa (sperm) within the male, these include the penis, urethra, vas deferens, and Cowper's gland.

The vagina meets the outside at the vulva, which also includes the labia, clitoris and urethra; during intercourse this area is lubricated by mucus secreted by the Bartholin's glands. The vagina is attached to the uterus through the cervix, while the uterus is attached to the ovaries via the fallopian tubes. Each ovary contains hundreds of egg cells or ova (singular ovum).

Approximately every 28 days, the pituitary gland releases a hormone that stimulates some of the ova to develop and grow. One ovum is released and it passes through the fallopian tube into the uterus. Hormones produced by the ovaries prepare the uterus to receive the ovum. The lining of the uterus, called the endometrium, and unfertilized ova are shed each cycle through the process of menstruation. If the ovum is fertilized by sperm, it attaches to the endometrium and the fetus develops. 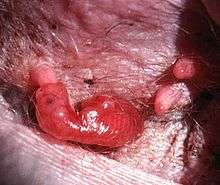 Most mammal reproductive systems are similar, however, there are some notable differences between the non-human mammals and humans. For instance, most male mammals have a penis which is stored internally until erect, and most have a penis bone or baculum. Additionally, males of most species do not remain continually sexually fertile as humans do. Like humans, most groups of mammals have descended testicles found within a scrotum, however, others have descended testicles that rest on the ventral body wall, and a few groups of mammals, such as elephants, have undescended testicles found deep within their body cavities near their kidneys.[5]

The reproductive system of marsupials is unique in that the female has two vaginae, both of which open externally through one orifice but lead to different compartments within the uterus; males usually have a two-pronged penis which corresponds to the females' two vaginae. Marsupials typically develop their offspring in an external pouch containing teats to which their newborn young (joeys) attach themselves for post uterine development. Also, marsupials have a unique prepenial scrotum.[6] The 15mm (5/8 in) long newborn joey instinctively crawls and wriggles the several inches (15 cm), while clinging to fur, on the way to its mother's pouch.

The uterus and vagina are unique to mammals with no homologue in birds, reptiles, amphibians, or fish. In place of the uterus the other vertebrate groups have an unmodified oviduct leading directly to a cloaca, which is a shared exit-hole for gametes, urine, and feces. Monotremes (i.e. platypus and echidnas), a group of egg-laying mammals, also lack a uterus and vagina, and in that respect have a reproductive system resembling that of a reptile.

In domestic canines, sexual maturity (puberty) occurs between the ages of 6 to 12 months for both males and females, although this can be delayed until up to two years of age for some large breeds.

Male and female birds have a cloaca, an opening through which eggs, sperm, and wastes pass. Intercourse is performed by pressing the lips of the cloacae together, which is sometimes known as intromittent organ which is known as a phallus that is analogous to the mammals' penis. The female lays amniotic eggs in which the young fetus continues to develop after it leaves the female's body. Unlike most vertebrates female birds typically have only one functional ovary and oviduct.[7] As a group, birds, like mammals, are noted for their high level of parental care.

Reptiles are almost all sexually dimorphic, and exhibit internal fertilization through the cloaca. Some reptiles lay eggs while others are viviparous (animals that deliver live young). Reproductive organs are found within the cloaca of reptiles. Most male reptiles have copulatory organs, which are usually retracted or inverted and stored inside the body. In turtles and crocodilians, the male has a single median penis-like organ, while male snakes and lizards each possess a pair of penis-like organs. 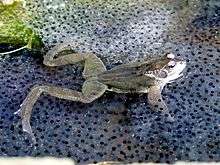 Fish gonads are typically pairs of either ovaries or testes. Most fish are sexually dimorphic but some species are hermaphroditic or unisexual.[11]

Invertebrates have an extremely diverse array of reproductive systems, the only commonality may be that they all lay eggs. Also, aside from cephalopods, and arthropods, nearly all other invertebrates are hermaphroditic and exhibit external fertilization.

Most insects reproduce oviparously, i.e. by laying eggs. The eggs are produced by the female in a pair of ovaries. Sperm, produced by the male in one testis or more commonly two, is transmitted to the female during mating by means of external genitalia. The sperm is stored within the female in one or more spermathecae. At the time of fertilization, the eggs travel along oviducts to be fertilized by the sperm and are then expelled from the body ("laid"), in most cases via an ovipositor.

Arachnids may have one or two gonads, which are located in the abdomen. The genital opening is usually located on the underside of the second abdominal segment. In most species, the male transfers sperm to the female in a package, or spermatophore. Complex courtship rituals have evolved in many arachnids to ensure the safe delivery of the sperm to the female.[13]

Arachnids usually lay yolky eggs, which hatch into immatures that resemble adults. Scorpions, however, are either ovoviviparous or viviparous, depending on species, and bear live young.

Among all living organisms, flowers, which are the reproductive structures of angiosperms, are the most varied physically and show a correspondingly great diversity in methods of reproduction.[14] Plants that are not flowering plants (green algae, mosses, liverworts, hornworts, ferns and gymnosperms such as conifers) also have complex interplays between morphological adaptation and environmental factors in their sexual reproduction. The breeding system, or how the sperm from one plant fertilizes the ovum of another, depends on the reproductive morphology, and is the single most important determinant of the genetic structure of nonclonal plant populations. Christian Konrad Sprengel (1793) studied the reproduction of flowering plants and for the first time it was understood that the pollination process involved both biotic and abiotic interactions.

Fungal reproduction is complex, reflecting the differences in lifestyles and genetic makeup within this diverse kingdom of organisms.[15] It is estimated that a third of all fungi reproduce using more than one method of propagation; for example, reproduction may occur in two well-differentiated stages within the life cycle of a species, the teleomorph and the anamorph.[16] Environmental conditions trigger genetically determined developmental states that lead to the creation of specialized structures for sexual or asexual reproduction. These structures aid reproduction by efficiently dispersing spores or spore-containing propagules.