Shahdad (Persian: شهداد‎‎, also Romanized as Shahdād; formerly, Khabīs)[1] is a city in and the capital of Shahdad District, in Kerman County, Kerman Province, Iran. At the 2006 census, its population was 4,097, in 1,010 families.[2]

The driving distance from Kerman city to Shahdad is 95 km. The local climate is hot and dry. The main agricultural produce is date fruits.

There are many castles and caravanserais at Shahdad and around. Examples are the Shafee Abaad castle and the Godeez castle.

Sharain of Imam Zadeh Zeyd, south of town, is the most respected religious site of Shahdad.

Shahdad has a desert climate (Köppen climate classification BWh). The town is located at the edge of the Lut desert, which is one of the worlds hottest places. The Summers are long and extremely hot, while the winter are short and mild. 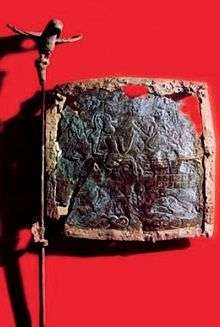 Shahdad was a major Bronze Age centre discovered in 1968. Around 1970, Ali Hakemi of Archaeological Institute of Iran investigated the site. He conducted excavations for seven seasons.

"By the early third millennium B.C., Shahdad began to grow quickly as international trade with Mesopotamia expanded. Tomb excavations revealed spectacular artifacts amid stone blocks once painted in vibrant colors. These include several extraordinary, nearly life-size clay statues placed with the dead. The city's artisans worked lapis lazuli, silver, lead, turquoise, and other materials imported from as far away as eastern Afghanistan, as well as shells from the distant Persian Gulf and Indian Ocean. Evidence shows that ancient Shahdad had a large metalworking industry by this time."[8]

Shahdad shares many parallels with Shahr-i-Sokhta. Many other ancient settlements are found in what is now empty desert. According to Iranian archaeologist Hassan Fazeli Nashli, some 900 Bronze Age sites have been documented in the Sistan Basin between Afghanistan and Pakistan.

North of town, a Jiroft Civilization village is said to have existed around 6,000 BC. The legendary Aratta of the Sumerian sources may have been located in this area.

The oldest metal flag in human history was found in this city.