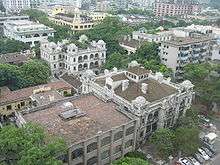 1920s map of "Shameen", showing the location of the British and French concessions. 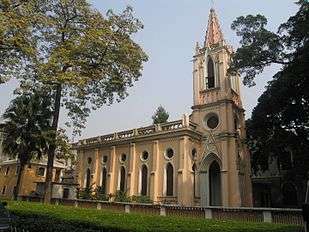 Our Lady of Lourdes Chapel on Shamian Island. 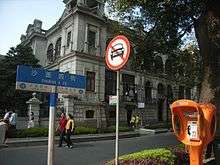 Shamian Island (also Romanised as Shameen Island or Shamin Island, both from its Cantonese Chinese pronunciation) is a sandbank island in the Liwan District of Guangzhou city, Guangdong province, China. The island's name literally means "sandy surface" in Chinese.

The territory was divided into two concessions given to France and the United Kingdom by the Qing government in the 19th century. The island is a gazetted historical area that serves as a tranquil reminder of the colonial European period, with quiet pedestrian avenues flanked by trees and lined by historical buildings in various states of upkeep. The island is the location of several hotels, a youth hostel, restaurants and tourist shops selling curios and souvenirs.

Shamian Island was an important port for Guangzhou's foreign trade from the Song to the Qing Dynasty.[1] From the 18th to the mid 19th century, the foreigners lived and did business in a row of houses known as the Thirteen Factories, on the banks of the Pearl River to the east the present Shamian,[3] which was then an anchorage for thousands of boat people.[4][5] Shamian became a strategic point for city defense during the period of the First and Second Opium Wars. In 1859,[1] the territory was divided in two concessions given to France and the United Kingdom (of which 3/5 belonged to the British and 2/5 to the French).[6] It was connected to the mainland by two bridges, which were closed at 10pm as a security measure.[3][7] The British arch bridge, also called the "Bridge of England" and built in 1861, to the north was guarded by Sikh police officers, and the French bridge to the east was guarded by Vietnamese (Cochinchina) recruits with the Troupes coloniales.[4]

Trading companies from Britain, the United States, France, Holland, Italy, Germany, Portugal, and Japan built stone mansions along the waterfront.[3] The construction on the island was characterized by climate-adapted but Western-plan detached houses with hipped roofs and large verandahs.[8]

After 1949, the mansions of Shamian became government offices or apartment houses and the churches were turned into factories.[3] 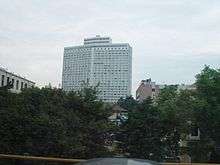 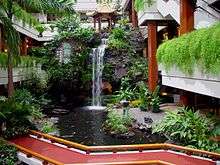 Waterfall inside the White Swan Hotel. 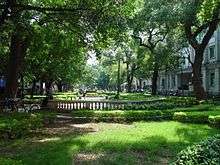 A public garden on Shamian Island.

The French Catholic chapel, Our Lady of Lourdes Chapel (露德圣母堂), has been restored and stands on the main boulevard.[2] Located at the French end of the island, it was completed in 1892.[11]

While Shamian Island has historically been the site of a number of consulates, the only one located on Shamian Island as of 2014 is the Consulate of Poland, at No. 63 Shamian Main Street.[13]

Former consulates on the Island include: 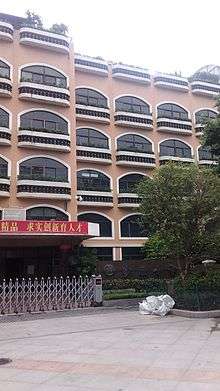 Various bronze statues are scattered around the island which depict life as it was during earlier periods on the island, as well as from more recent times. For example, one statue entitled "A gentleman, a lady and a darn woman" shows a Western couple watching a Chinese woman darning cloth. Another depicts the changing appearances and stature of Chinese women, with a woman from colonial times in traditional clothing, a slightly taller woman from the early or mid 20th century wearing a cheongsam, and a relatively tall and slender young Chinese woman wearing shorts and talking on a mobile phone.

Huangsha Station of Guangzhou Metro is located within a short walk from the island, via an overpass crossing the busy Liu'ersan Road. There is also a ferry running from Huangsha Pier to Fangcun Pier, which runs every 10 minutes carrying foot-passengers and bicycles. Fares are from 0.5 RMB for a foot passenger and 1 RMB for a passenger with a bike. There are no public buses on the island itself, although there are several nearby bus stops. 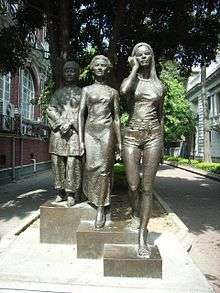